CODIE co-sponsors one-man show: “The Trouble with My Name” 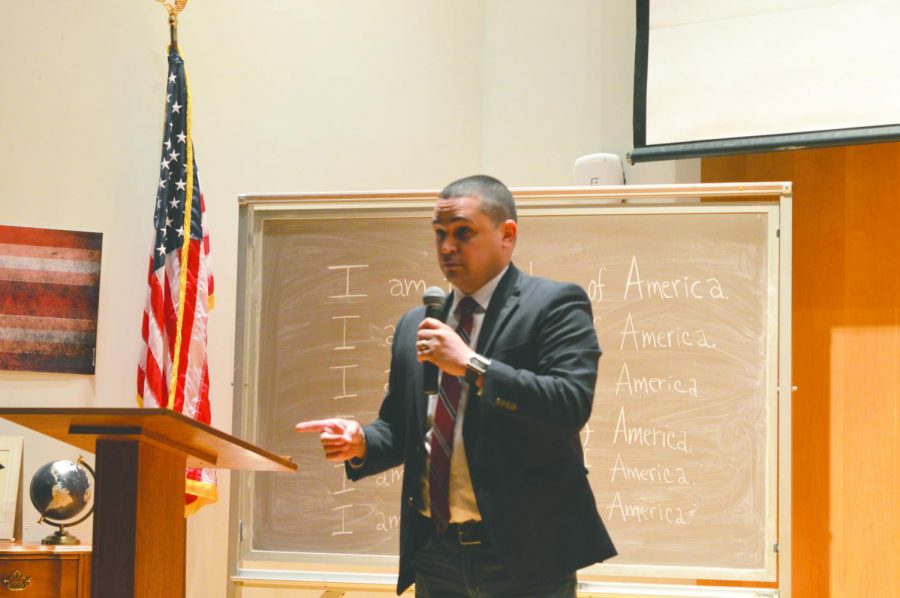 Dr. Avila spoke in front of a set that featured a chalkboard that said, “I am the future of America.” Also on stage were numerous Puerto Rican flags, as well as family photographs.

The event, which was held on King’s College campus, was a one-man production from Professor Javier Ávila titled The Trouble with My Name. The show was free to the public. It was co-sponsored with King’s College’s Interfaith Resource Center for Peace & Justice.

Ávila’s show focused on the cultural struggles he faced when moving between Puerto Rico and the mainland United States. Sitting on a stage decorated with memorabilia from his childhood, Puerto Rican flags, and photos of family, Ávila related discussed how race and ethnicity has affected his life.

Born and raised in Puerto Rico, Ávila considered himself to be white and was shocked to find the United States treated him differently. Ávila now is part of an interracial family having married a white American woman. The two also have a child together, Oscar, who raised on-and-off stage throughout the show, and who Ávila lovingly called ‘whitetino’, an impromptu of white and latino.

“That’s when I understood, finally, that race is a construct,” said Ávila. “Yes, we are different but it is created to seperate us. How is it possible for I to be white one day and brown the next day, and exactly the same person with the same values?”

Ávila continued by discussing the issues minorities, specifically those with accents and “foreign” names, face. Ávila told a story about a confused neighbor who mistaken him for a gardener, who later spoke to him only because of proof of his academic achievements, which were billboards advertising his PA Professor of the Year award.

“Here’s the problem with being a minority: it’s that often we have to prove to the majority that we are not the stereotype they have of us and that could be exhausting,” he said.

Ávila also discussed his family’s experiences with racism, including his father’s experience in the United States after returning from fighting in the Korean War and his grandmother’s nationalistic past.

Also in the show, Ávila discussed his job as an educator, and what teaching means to him, relating a story of an apathetic student to pet peeves as a professor.

Interspersed into his discussion were readings of his poems, including those on his grandmother, racism, and a touching final poem titled Bloodlines, which chronicled his son’s ancestors’ history.

Ávila, spoke on the emotionality of his poetry.

“Especially with this poem, it’s painful to think about things like that. But I think writing is a necessity, it’s something I have to do. I would feel incomplete if I didnt.”

Dr. Linda Paul, a philosophy professor from Wilkes University, remarked on her thoughts on the performance.

“[The show] was fascinating, humorous, and also it gave us a lot to think about. There were a lot of things he talked about that I just hadn’t thought about before,” she said.

The co-sponsorship was one of the first events hosted by the recently formed Council on Diversity, Inclusion and Equity. The group was formed to oversee and evaluate issues on diversity and inclusion on campus. The council recently sent out a survey to students on diversity in order to get data on where help is needed on campus.

Dr. Helen Davis, an english professor and co-chair of CODIE, spoke about the council’s decision to co-sponsor the show.

“Dr. Ávila is a speaker who has an interesting creative presentation but also is bringing up really important issues about representation, inclusion and diversity,” she said. “He’s a great example of the kind of things [CODIE] hopes to bring in.”

The event was held as an end to the regional AAUP, American Association of University Professors, Conference. The conference was co-sponsored by both Kings and Wilkes.

Dr. Ayisha Williams, a neuroscience professor and co-chair of CODIE as well, spoke about how important Ávila’s performance was to bring to college students.

“I think students struggle with identity, not just racial identities,” she said. “I think [Ávila’s performance] can resonate with them. Bringing someone who can converse with the community in such an innovative way I think will be engaging and be able to highlight important themes that many students struggle with.”

Dr. Davis also praised the emotional and intellectual prose of the performance.

“I think literature is a wonderful vehicle to help us understand other people and ourselves. That’s the great thing about literature, in reading about it and putting ourselves in other people’s experiences. Hopefully you are also learning about yourself and becoming more self aware.”

At King’s College the lecture served as part of the Barbara Sabol Memorial Lecture series.

Professor Javier Ávila has published a number of novels and books of poetry. One of his books, Different, was made into an award-winning motion picture titled Miente. In 2015, Ávila was awarded the 2015 Pennsylvania Professor of the Year, and in 2016 he was awarded the Hispanic Leader of the Year award by the Greater Lehigh Valley Chamber of Commerce.