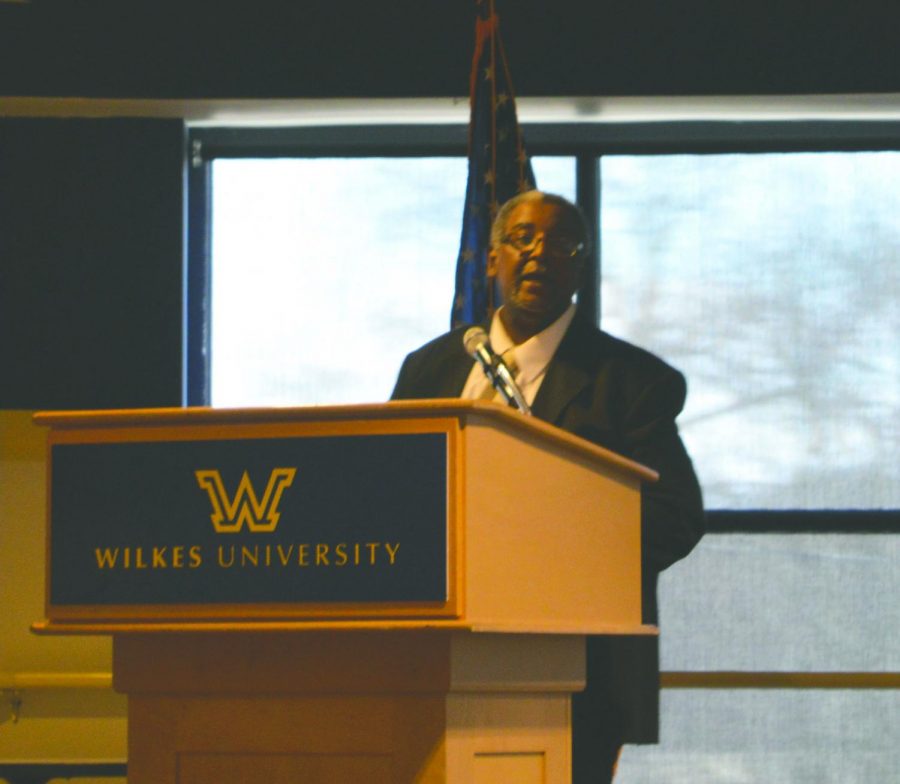 The event, which took place in the Henry Student Center Ballroom, was a collaboration of the Campus Interfaith office and the Office of Diversity Affairs. The theme of the event was “Shedding the Light.”

Erica Acosta, the associate director of diversity initiatives at Wilkes, opened the event.

“As we sit here today, let’s shed some light on the grassroots efforts that have been happening across the nation to continue the work that Martin Luther King Jr. started so long ago,” said Acosta.

President Patrick Leahy read some of the improvised speech Robert F. Kennedy gave in Indianapolis after hearing about the death of Martin Luther King Jr. At the time, Kennedy was promoting his presidential campaign, which never came to fruition due to his own assassination a few months later.

“What we need in the United States is not violence or lawlessness,” quoted Leahy, “but love and wisdom, compassion toward one another, and a feeling of justice toward those who still suffer within our country, whether they be white or they be black.”

Following Leahy, Dr. Helen Davis read some of Martin Luther King Jr.’s last speech from the day before he died. Davis is an English professor and part of CODIE, the Council on Diversity, Inclusion and Equity.

“When I read these words yesterday, I couldn’t help but think about the current moments of the 21st century, where so much has happened, and so much hasn’t happened, and so much has changed, so much has not changed, and how frustrating it can be to feel that your country isn’t going where you want it to go and isn’t making the progress you want it to make,” said Davis. “But then I see the hope in people like Josh [Shepherd], and people like Conroy [Yearde], who are willing to make a difference, and willing to make it work, who are willing to resist.”

Davis was followed by the keynote speaker, Ron Felton. Felton was the NAACP Wilkes-Barre branch president for 18 years. He currently serves as the NAACP Eastern Sectional Director for the NAACP PA State Conference, which he had previously held in 2015 as well.

Felton spoke about his own childhood experiences in the segregated south.

“I was the only one of my siblings to go to an integrated school in the north so I was not indoctrinated into the system,” said Felton. “However, I do remember going to the movies with my parents, and remembering that we had to sit in the balcony, a place reserved for blacks.”

Felton then spoke about how the evolution of Dr. King’s dream in the modern world.

“Dr. King’s dream is far from being over. As a matter of fact, many would say that the dream has been accelerated in the reverse direction. The changes of the last 50 years have been greatly dismantled under the leadership of United States attorney general Jeff Sessions,” he continued.

Jeff Sessions has been criticized by some for his views on illegal immigration, which many say are too harsh.

Felton followed his speech with an excerpt of Dr. King’s ‘I Have Seen the Promised Land.’ Following this, student government president Cody Morcom spoke.

“Dr. King, though he is now gone now for 50 years, holds a special place in the hearts of those who have lived during that time period, or those like myself, who have learned about Dr. King in our academic lives,” said Morcom.

The vice president of the Multicultural Student Coalition, Conroy Yearde, also spoke briefly at the event.

The ceremony was ended with a benediction spoken by Kristin Osipower, the campus interfaith coordinator.

Dr. Martin Luther King Jr. was clergyman and civil rights activist in the 1960s. He was assassinated on April 4, 1968 in Mempis, TN.