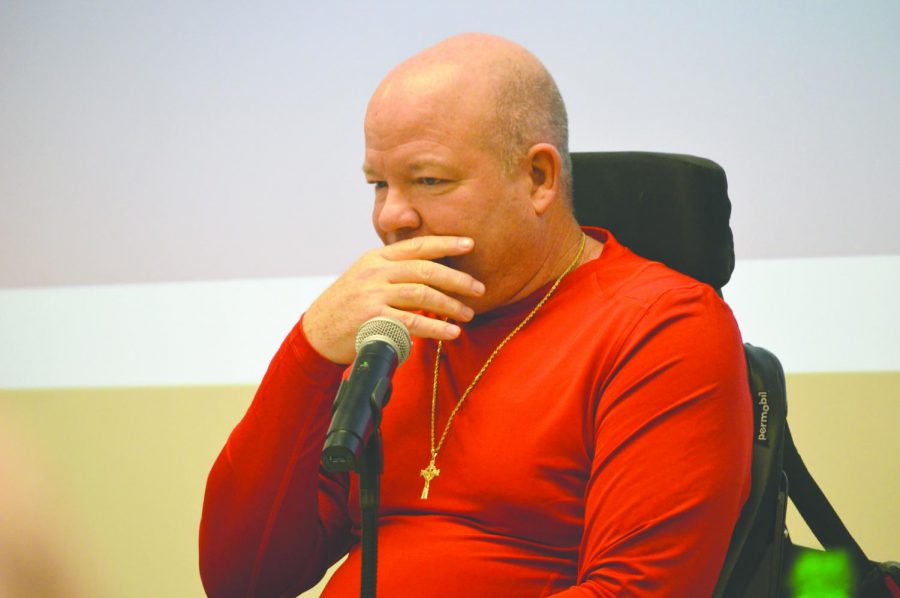 Paul Miller was diagnosed with ALS in 2011. He, and his wife Eileen Miller, have since made it their duty to educate people across the country about the condition.

Paul Miller, a man living with ALS, spoke about his diagnosis and how it has since impacted his life.

Miller attributes his diagnosis to the trauma following his son’s death caused by a car accident.

Paul J. Miller, his son, died on July 5, 2010, when his vehicle was hit by a tractor-trailer. The truck driver was distracted at the moment of the crash.

The symptoms began a year after his son had died. The stress, trauma, and anxiety, that resulted from this tragedy, attested Miller, triggered ALS.

According to the ALS Association, the disease can be genetic, and those who carry it have a 50 percent chance to have the disease.

ALS, also known as amyotrophic lateral sclerosis, is a progressive, fatal, neuromuscular disorder that affects the brain and spinal cord. Simple voluntary muscle movements, such as breathing and walking, eventually become impossible. Patients with at a progressive stage of the disease, are totally paralyzed. However, their minds generally remain unaffected.

“I started to lose balance, and dragging my left foot,” Miller said, as he described how his first symptoms manifested. And after many tests were conducted, and the possibility of having other diseases were ruled out, Miller was diagnosed with ALS, which were crushing news to his wife and daughter.

As time passed, he started to lose his ability to do everyday tasks, but it wasn’t until he could no longer drive that he truly realized the complexity of his situation.

“Once my doctor found out I drove my way to the medical appointments, she made me promise I will not drive again, which made me feel bad because at that moment I thought of the death of my son.”

“It has gotten into my breathing, and I also now slur,” said Miller, as he described his current condition.

“For years, until last year, I golfed with my friends,” he said, “and it wasn’t about how good I was, it was about me being out there moving, but I had to give that up because doing that was a continuous struggle.”

“I have now a tendency to choke, and the easiest thing for me to choke on is water,” Miller said.

Research by the ALS Association has also found that patients with the disease have 2-5 years to live, Miller’s ALS is in slow progress, although he says his quality of life is decreasing.

“It was eye-opening to see what living with ALS is really like,” said Nalleyn Nunez, a psychology major who was present for the presentation given by Paul.

“I have read many studies and heard people talking about the disease, but I feel like it’s difficult to get the full scoop of what ALS does to you until you hear that from someone that is suffering from it.”

“We started a few years ago,” Eileen Miller, Paul’s wife of 32 years, said. “We began the outreach to local colleges, and Paul has now shared his story with hundreds of young people.”

The Millers have now traveled hundreds of miles to spread a positive message, and on the side, Eileen is an avid advocator against distracted driving, has given talks to thousands of high schoolers, and continues to do so.

Paul mentioned how grateful he was to his wife for his caregiving and expressed the content he feels when he has the chance to give talks.

“I am sure I will not be able to speak for long, but with the time I have left, I want to speak for those who no longer can.”