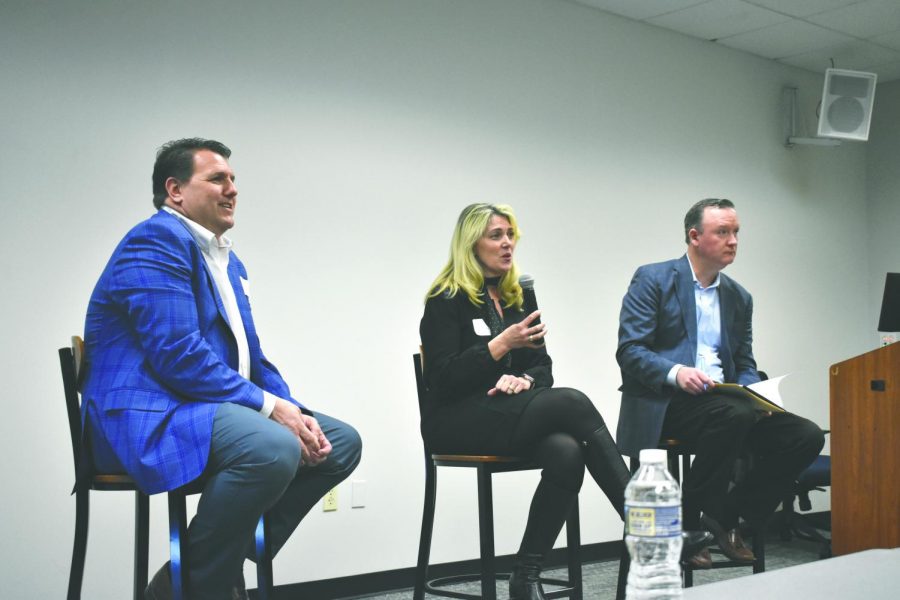 Titled “The Unexpected Opportunity to Sell the Family Business” the workshop covered the thoughts and processes that go into selling a family business.

Despite the snow, the event still took place even though 20 registered attendees were unable to attend. Earlier in the day, the same workshop was held at Penn State in Scranton and reportedly was a success.

Moderating the panel was Daniel Haggerty, a lawyer with PMJ Business Brokers in Carks Summit.

Sharing their story was wife and husband, Maureen Mangan Mills and Bob Mills who sold their company Craft Oil Corporation in 2012.

Maureen Mangan Mills joined Craft Oil in 1996 when her father still owned the business. At the time, it which was strictly dealing motor oil, and was making five million in revenue.

Bob Mangan decided to join the business when the couple were expecting their first child and Maureen Mangan Mill’s father went into partial retirement.

The couple then discussed their growing success over the decade. From growing their employee count and making 15 acquisitions over the years. The company grew from making five million in to 150 million in revenue.

The business was also recognised by Fortune magazine and other publications, Bob Mills told the audience.

“People can’t achieve things if they don’t know what they’re achieving,” Maureen Mangan Mills said, explaining how herself and her husband began communicating and interacting with their employees more than when her father owned the business.

The business faced issues when the union in Philadelphia sent two people as undercover employees.

“It affected us in a negative way […] overnight our world turned upside down,” Maureen Mangan Mills told the audience that the union had bribed their employees for petition signatures and barred the entrances to the buildings of their business.

The couple spent $150,000 in legal fees fighting the union over the course of three months.

“It’s not about paying people more money – it’s about work roles and it’s about being able to do what we could to grow the business […] I can’t be hindered by dealing with this stuff,” Bob Mangan said referring to the court battle.

After this, the couple decided to sell the business after considering their own future and the future of their children who might be involved in the business.

“We knew the timing was right, we knew we couldn’t recreate the deal,” Maureen Mangan Mills continued, “We realised that sometimes you think you are invincible […] that it can’t be your best year that you can beat it, realistically it might be your best year and you might want to sell.”

“You have to know your industry and where it is and you need to know your family situation,” Bob Millls said.

“It’s not easy selling a family business,” Maureen Mangan Mills admitted, explaining that the sell stills comes up in family conversations, especially with relatives who thought their children might be involved someday.