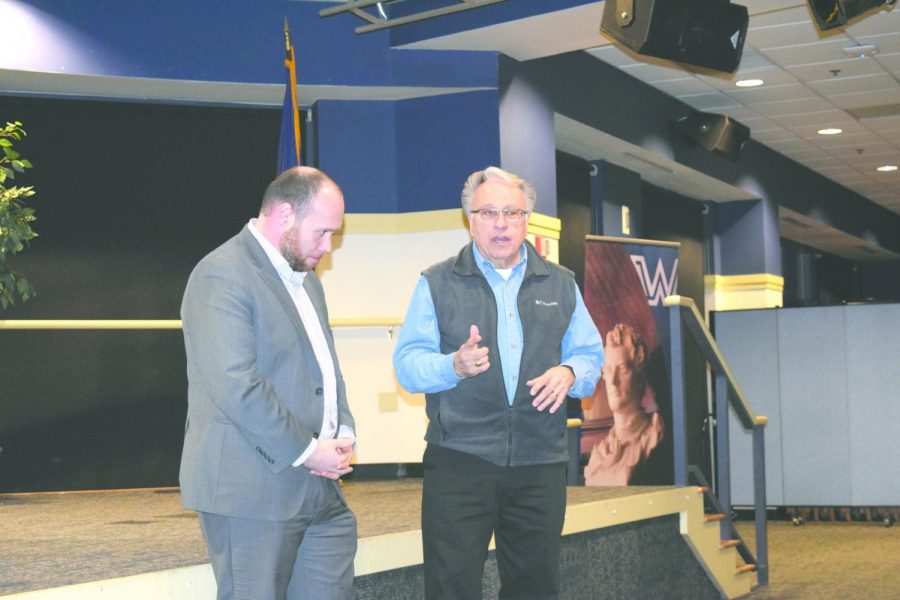 Jeff Dempsey, of CeasefirePA, and Rep. Eddie Day Pashinski shared the stage as they discussed legislature related to gun control, as well as voting in the next election.

On March 15, Action Together NEPA and the Wilkes University Sociology and Criminology departments brought different organizations to discuss approaches to violence reduction in Wilkes-Barre.

Representatives from gun violence prevention organizations spoke about their separate approaches to lessening violence through means like legislation and community outreach. The event leaders hope to create a Ceasefire Wilkes-Barre using strategies from both organizations.

Dr. Andrew Wilczak, a professor of Sociology, brought the event to Wilkes University after the Parkland shooting in February. Wilczak is the chair of the outreach and education committee for Action Together NEPA, an activist organization in the area. Action Together NEPA had previously held a gun control rally in downtown Wilkes-Barre on Feb. 19.

“We want to restore people’s confidence in the city, and make Wilkes-Barre and the surrounding cities a safer place,” said Wilczak

“The two organizations, despite having the names in common, are two very different groups,” explained Wilczak. “CeasefirePA tends to take a legislative and political side, while Philadelphia Ceasefire is more on the ground. As for what Ceasefire Wilkes-Barre ends up being is really up to us as a community. I envision it as a combination of the two.”

First to speak at the event was Jeff Dempsey, the program director of CeasefirePA. CeasefirePA is one of the largest statewide organization for gun violence prevention, with a focus on education and legislation.

“Gun violence is much larger than what we typically think of as gun violence,” said Dempsey. “It’s easy to look at something like city homicide rates, but we don’t necessarily think of suicide rates. Suicide counts for so many gun deaths which is why people on the other side of the debate often leave suicides out.”

Dempsey continued to speak on the work his organization tends to do.

“On top of education, we also do a lot of advocacy work,” explained Dempsey. “We try to take the people that we speak to and pair them with their representatives. We equip them to be better advocates.

“We do more legislative work because we believe in the laws that we support, and we believe that in the Pennsylvania legislature quite frankly there are laws that will endanger it and do harm.”

State Rep. Eddie Day Pashinski then chimed in to explain his stance on the issue, explaining his belief that the second amendment is outdated.

“The NRA has gone from a sportsman organization to a money making machine,” said Pashinski.

“Those kids stood up, and so elegantly, brilliantly, courageously stood up and told the truth,” he said. “What did they do in Florida? They passed gun legislation for the first time.

“As a legislature, it is up to me to find laws that protect people, that address concerns and address needs.”

Representatives from Philadelphia Ceasefire came on stage to discuss their methods of gun violence reduction. The organization was originally created in Chicago by a scientist who noticed the clusters of shootings was similar to the spread of cholera in Africa, leading to him speaking about gun violence as a public health issue. The organizations use the Cure Violence model, which uses disease control methods, according to the Cure Violence website.

Marla Davis Bellamy brought the organization to Philadelphia after serving as Chief of Staff for the Pennsylvania Department of Health before becoming executive director of Minority Health and Health Disparities at Lewis Katz School of Medicine at Temple.

“One of the reasons we talk about violence as a public health issue is because it certainly impacts so many people,” explained Bellamy.

“Tiger Woods has been playing golf since he was two years old, why? Because he was introduced to it by his parents. He was just inundated by golf his entire life, so he’s a great golfer. Now flip the script a little bit. If a child is in a home where there’s guns, violence, whether it’s in communities or schools, that’s all they see. That’s what they are going to become.”

Philadelphia Ceasefire hires what they call ‘credible messengers,’ which are people who are known and trusted by the community, who previously had been engaged in gun violence. Their efforts are also focused on high-risk individuals.

“If we are in an area that has known gun problems, we are going to focus our efforts on the leader of the gang,” explained Bellamy. “That person has a lot of influence.”

The organization responds to neighborhood shootings by having members go to the scene and engage with family members and friends of the victim. The organization also mediates disagreements between individuals to prevent the conflict from escalating to gun violence.

Dr. Mary Washim, a pastor and police chaplin, spoke about her approach to stopping gun violence. She works as a prayer coordinator for Philadelphia, and holds a monthly conference call prayer hotline to pray for the city. The conference call includes people across the country. The calls happen the first Monday of every month at 5:00 a.m. and 7:30 p.m.

Peter Harris, also a police chaplain affiliated with the organization, gave his perspective on the situation.

“We need to connect to each other,” said Harris. “Disconnect is a word that people use a lot, but the fact of the matter is that you can’t disconnect if you were not connected. That’s our problem, we are unconnected.