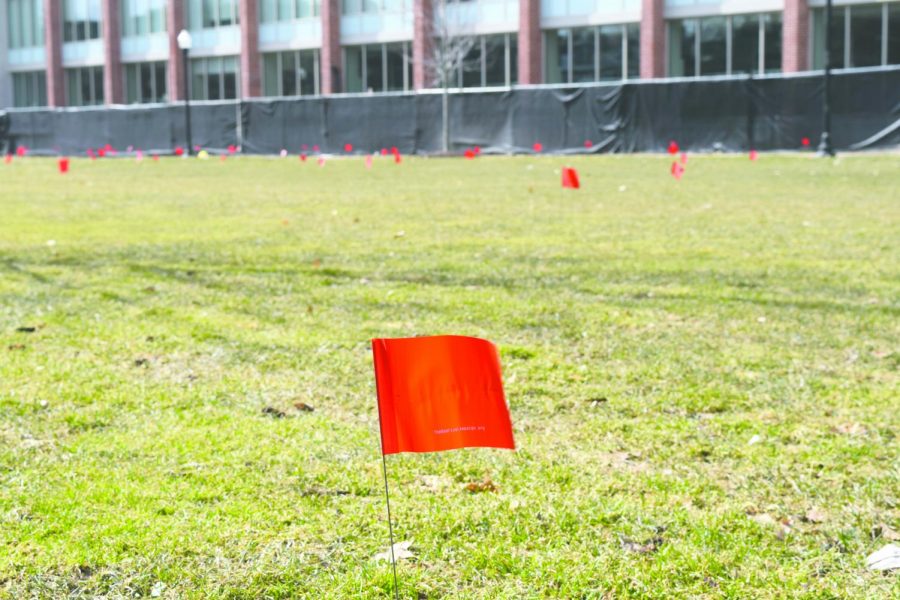 The Red Flag Campaign put red flags around campus to bring awareness to ‘red flags’ in abusive relationships, which many do not notice initially.

As Colonels walk through campus in the coming weeks, they may see red for a good reason.

During the month of March, Wilkes is holding a three-part Red Flag Campaign to raise awareness about abusive relationships and intimate partner violence.

This initiative started by placing red flags around the Fenner Quadrangle, encouraging students to spot the “red flags” in an abusive relationship.

The campaign is organized by Samantha Hart, Title IX coordinator at Wilkes. She expressed the importance of raising awareness about relationship abuse and violence, and encouraged others to intervene if they spot any red flags.

“Our goal is to foster a community that is intolerant of abusive behaviors and more invested in establishing healthy relationships,” Hart said.

A 2011 Knowledge Networks poll on abuse in college relationships noted that 36 percent of college students had experienced this in some form. Many in relationships do not recognize the red flags early on which can lead to physical abuse.

The initiative of placing red flags around campus is meant to engage students’ curiosity and preface the rest of the campaign.

Director of Residence Life Debbie Scheibler assisted in placing these flags around campus.

“I am supporting the efforts of Samantha Hart and her office because I strongly support dating and intimate partner violence awareness,” she said.

Beginning on March 19, the second stage of the campaign will begin as posters highlighting the eight warning signs of death violence will be placed around campus.

The campaign will culminate on March 22 with the event “Colonels Know Their Flags” in the Henry Student Center. Students will be encouraged to wear red to the event to show support and awareness.

Attendees will be given the opportunity to learn more about the Red Flag Campaign and resources will be provided for help with dating violence and abuse. In addition there will be photo opportunities and free Rita’s Italian Ice.

The Red Flag Campaign began in 2005 and has become a public awareness campaign that has spread to campuses around the nation. Hart emphasized the importance of this campaign on the Wilkes campus.

“Wilkes is committed to fostering an inclusive, welcoming and safe environment,” she said. “Our community has […] largely embraced this campaign.”

For more information on the campaign, contact [email protected]