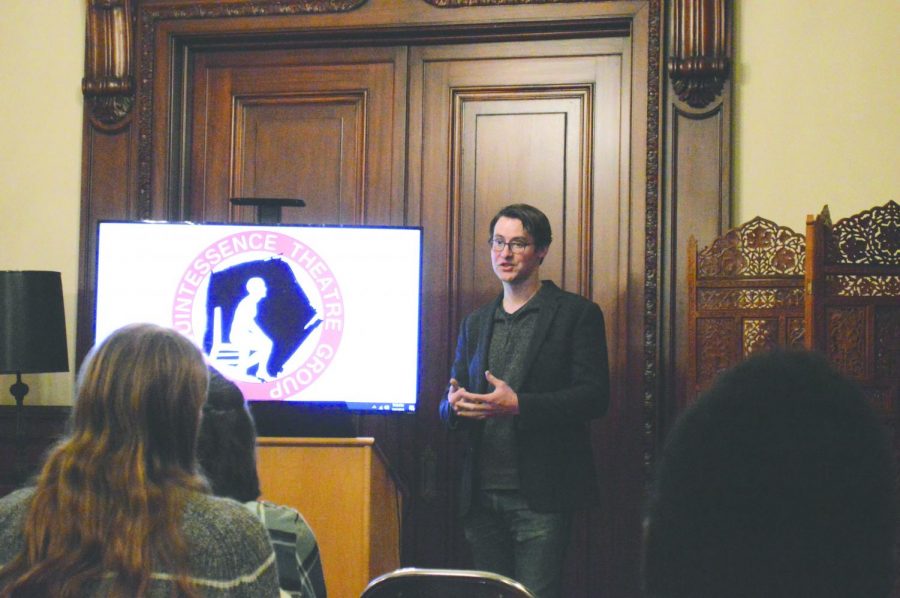 Alex Burns discussed topics such as his love for Shakespeare and writing plays.

Alex Burns, founding director of Quintessence Theatre group in Philadelphia, spoke on Tuesday to staff and students about his journey as a director and his motivations and reasons for creating contemporary versions of classical plays.

Burns has directed 30 shows with Quintessence, but has also directed at the Arden Theatre, Trinity Shakespeare Festival and the Shakespeare Theatre.

During the day, Burns delivered workshops to English literature and theatre students.

Dr. Mischelle Anthony, a professor and chair of the English Department, introduced the writer at the start of the evening event.

“Alex Burns is here because at one point, some Wilkes University faculty and students went down to see his production of Othello,” she said.

She added, “I wept twice during the (performance) and I’m not an easy crier. So I was shocked I was weeping over the production of Othello that had very minimal staging — the production of that play, it was so impressive. I’m a regular theater-goer now because of Alex’s vision.”

At the start of his talk, Burns talked about his experience in a British all-boys school, and how that affected his relationship with William Shakespeare.

He continued that his exposure to the theatre in the UK really inspired him: “One of the places I felt most at home was in the theatre. The stories of these plays were exciting and thrilling, the focus was all on the language, not on the acting.”

“I never had that moment of thinking that Shakespeare was this thing you had to meet in a classroom as a piece of written text.” Burns continued, “For me it was only something that you just learned and spoke aloud and it was something you felt in your body, the action of the words and the meter was a force, and the beat and the energy.”

Burns spoke about his horror when he returned to the U.S. at the age of 16 and his classmates didn’t have the same appreciation for the 17th century playwright: “They thought this was a really boring thing to study, not a blood sport where you can run around in a dress with a sword covered in blood.”

The director told the audience that the classics have strong relevance to contemporary times.

“Truly none of the questions we are asking and none of the things we are struggling with as human beings and people have really evolved or changed at all since the time Shakespeare was writing, and that’s really sad to say,” he said.

Burns added: “During moments of great social change like the one we’re experiencing right now, I think it’s more important than ever to look to the stories of the past and see where were we 400 years ago and how have dynamics evolved.”

Recently, the director created a contemporary take on the musical “My Fair Lady,” and said that because of the rise of the “MeToo” movement, the play had new complex meanings.

“You wouldn’t usually see ‘My Fair Lady’ as a war cry of the patriarchy. It really created this amazing space of ownership of language and the exploration of romance coming out of abuse and the need for abuse in women’s education and is censorship appropriate,” Burns said.

In the Q&A section of the event, Rebecca Voorhees, an English major, said: “Your rendition of ‘My Fair Lady’ reminded me of a play which made people very angry at the end. I read an article which just talked about audience, which was disturbing but so important.”

Burns responded: “I don’t want to create a theater that doesn’t reflect the world in which we live.”