President Trump delivers first State of the Union of 2018 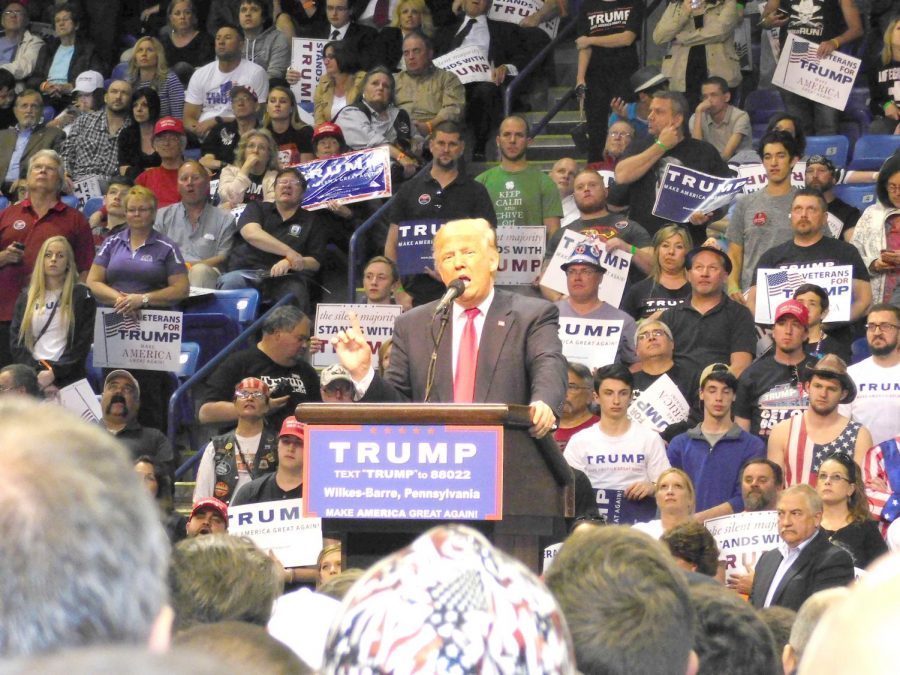 Donald Trump at his rally in Harrisburg in April 2016 while running for presidency.

On Tuesday, President Donald Trump delivered his State of the Union (SOTU), after one year of his presidency.

In his speech, Trump acknowledged the economic successes since he gained presidency, claiming that unemployment has hit a 45 year low and that 2.4 million jobs have been created. He also stated that taxes are now lower for “hard working Americans” and businesses.

However, these statements have led the public and the press to question the truthfulness of the SOTU, with the Washington Post producing headlines such as “Trump’s statements on the financial State of the Union: Fact of fiction?”

In his speech, Trump recognized individual Americans that have been positively affected by his economic decisions, and people that demonstrated national pride through actions that have benefited their fellow citizens.

The SOTU was rich with American nationalistic rhetoric, promoting the statement “make America great again” that has been Trump’s motto since his campaign, pride for the military and the American Dream.

Dr. Rob Bruno, an assistant professor in the Communication Studies Department said the delivery of the speech was an improvement from past events.

“President Trump has never adhered to the tried-and-true conventions of public speaking, or communication in general really.

“For the SOTU though he seemed to stick more to the script.  It was more organized and rehearsed, less ad libbed.  The language was a bit more conciliatory and inclusive, if only marginally so.  This was in contrast to his usual approach.”

However, Bruno pointed out that the President’s body language contradicted his organised speech. “His posture, gestures and facial expressions often came off as self-involved, defiant, and confrontational, which many see as the real man.”

Toni Storie, a junior political science major, watched the SOTU with her roommates and said.

“I don’t think Trump wrote his speech, but he did appear more statesman-like than usual. The question is will he keep it up or not”

Regarding the four-pillars immigration policies Trump mentioned in the speech, Storie criticized the president for “asking for way too much. It givers the appearance he wants to help but I think he knew the Democrats would think it’s too much and not vote.”

Not all Wilkes students felt the need to watch the SOTU. Emily Messinger, a junior Education major, said that she didn’t bother watching the event because “he’s not my President”. A phrase used by many online who refuse to acknowledge Trump as President.

On Thursday morning, Trump turned to Twitter to thank “all of the nice compliments and reviews” and stated that “46 million people watched, the highest number in history”. This statement has been debunked by several news sites, with CNN claiming that his address was the sixth most watched and received 2 million fewer viewers than the speech he delivered last year.