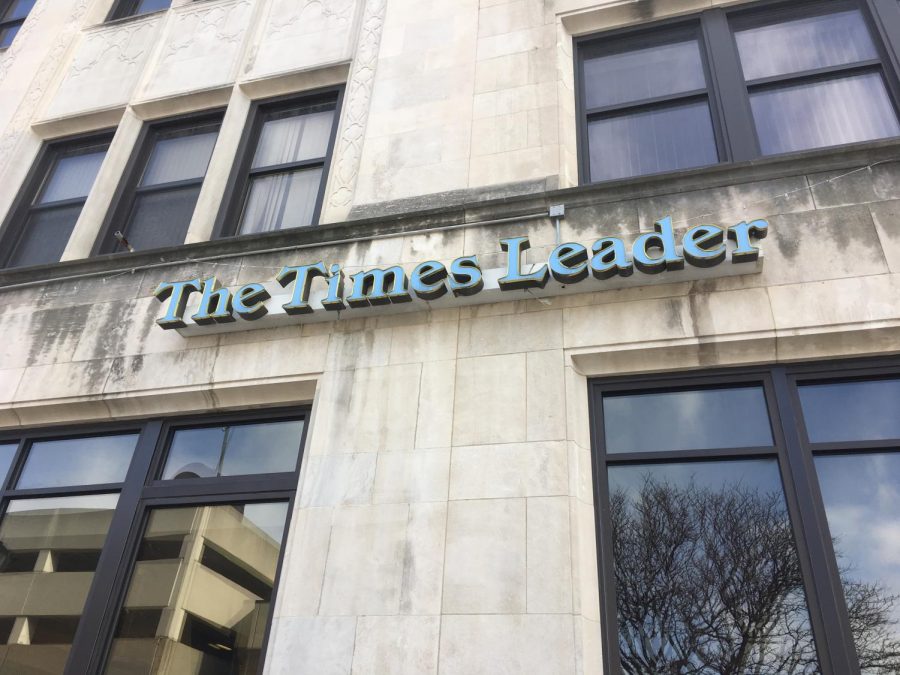 A picture of the Times Leader building that was recently purchased by King’s College.

This past week King’s College has purchased the Times Leader building which is located at 15 N. Main St.

Although the Times Leader is only moving to East Market Street and Pennsylvania Boulevard, the Times Leader says it is excited to stay in downtown Wilkes-Barre and look forward to the opportunity.

“Moving to our Market Street facility allows us to take the next step in expanded news coverage by creating a mobile newsroom. This allows our team of professional journalists to be in the communities we serve faster and more often,” said the Publisher of Times Leader Media Group, Mike Murray in an article posted by the company.

“Our commitment to remaining the dominant news voice in Wilkes-Barre remains at the top of our priority list along with providing the readers of Luzerne County only the most complete and up-to-date coverage,” said Murray, according to The Times Leader.

“The Times Leader building provides a strategic and cost effective location for King’s College to continue its expansion of Allied Health and Engineering programs within the existing footprint of the city,” said John R. Loyack.

“We are very excited to continue our expansion and to take another significant step in downtown Wilkes-Barre’s economic redevelopment and resurgence,”Loyack said.

According to the Times Leader, Rev. John Ryan, President of King’s College said, “We expect that this endeavor and a similar one at the Spring Brook building on Franklin Street will continue to build the exciting synergy of blending college life with Wilkes-Barre’s downtown.”

In response, Kenneth Hanadel, Supervisor of Grounds & Utility Laborers at Wilkes University talked of one of the construction projects Wilkes University has planned for this semester and for over the summer: The South Gateway Project.

Wilkes University’s South Campus Gateway project is a $3.5 million initiative that will consist of three parts. The project, which is already underway, plans to transform not only Wilkes University, but the streets that run through and around campus.

The first part of the Gateway project is a $1 million investment to create newer entrances to the Student Union Building parking lot in hopes to lessen the traffic on South River Street and South Franklin Street. It also will include an expansion of the south entrance plaza on South Franklin Street for a pedestrian connector to the Student Union Building.

The second part of the project includes a $1.35 million investment to construct new pedestrian crosswalks in front of the Student Union Building with new sidewalks and lighting  on several campus crosswalks.

Finally, the third part plans to create a gateway from the Stark Learning Center to the Student Union Building for $1.15 million.