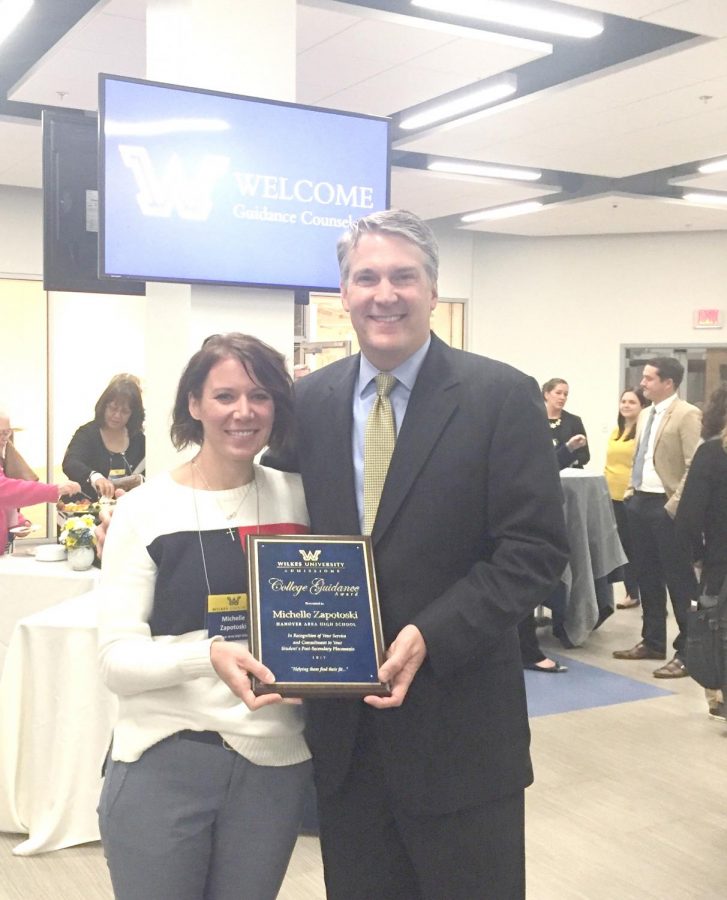 The recipient of this award is chosen by Wilkes Admissions. Jessica Haczewski, the Admissions Event Coordinator, said, “each counselor selects a guidance counselor who shows commitment to the Wilkes mission and writes up a few reasons as to why they are nominating this person. We then discuss it among ourselves and select the recipient.”

Zapotoski was one of many nominated for this award, and when it came down to finally picking the winner, Zapotoski fit the bill.

Zapotoski is a guidance counselor at Hanover Area Junior Senior High School for eleventh and twelfth grade students. As part of her job, she handles planning college visits, organizing college fairs and helps her students with their post-high school plans. Zapotoski is also responsible for pre-college testing including the PSSA and PSAT, as well as peer tutoring.

Working to better the lives of children is a family affair for the Zapotoskis. Zapotoski and her husband, Michael Zapotoski, a Wilkes University graduate, organized a charity baseball and softball game which took place in April. These games were organized for a Nanticoke Area student who is currently being treated for leukemia.

Michelle Zapotoski has also worked to introduce her students to Wilkes University. She currently works with the Wilkes Young Scholars Gateway Program that allows high school students to earn a year’s worth of college credits by the time they reach their high school graduation.

Zapotoski had 13 of her students enrolled at Wilkes University in the Fall of 2017.

When Zapotoski was named Guidance Counselor of the Year, she didn’t realize it was her name that was called until her husband had to nudge her and tell her she had just won.

“I was so excited and shocked,” she said.

“I am one of those people who LOVES what they do. I have been doing this job for 13 years and it has drastically changed since I started. I have found and truly believe that once they have decided what direction they are going to head in, and the earlier the better on that, they are happier, healthier, and more involved students.”

Some of Zapotoski’s students that now attend Wilkes had some words to say about their guidance counselor.

“Ms. Zapotoski fully deserves her award, as she always went out of her way to help her students,” sophomore pharmacy major Mallory Ellis said.

“Without her, I’m not sure how I would’ve made it through high school and progressed onto college,” said sophomore Lauren Coleman.

“No matter what time of the day I would go to see her, she would make herself available no matter how busy she was,” sophomore pharmacy major Maryann Chapin said.

The Guidance Counselor of the Year award has been given for three years. The previous winners were Diane McFarlane from E.L. Meyers High School and Jill Saporito from Coughlin High School.

“The award from Wilkes University was such a highlight in my career and I am so grateful,” Zapotoski said.