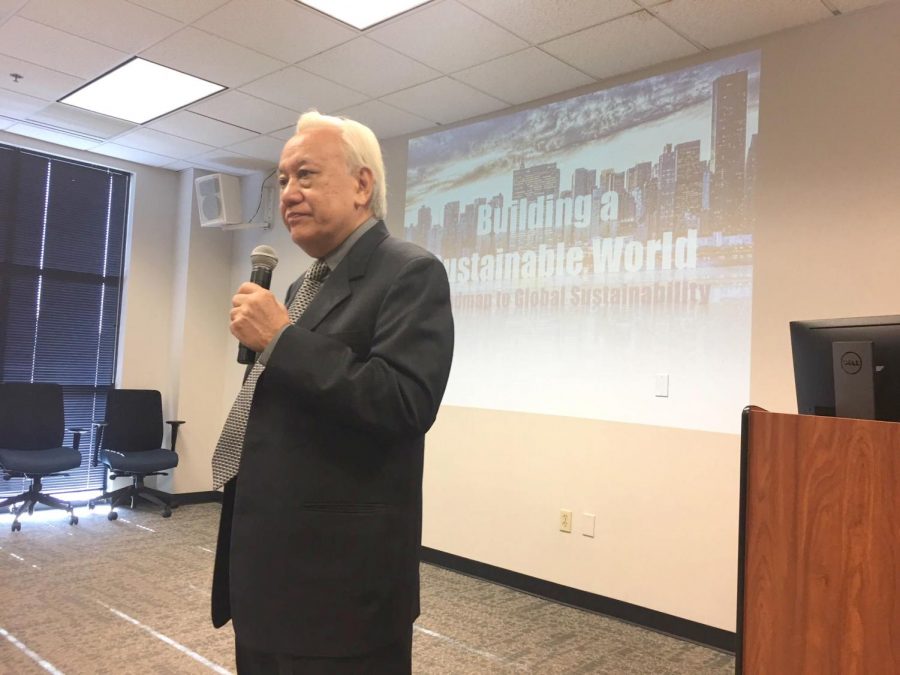 Dr. Donlad Lee spoke on solutions to problems plaguing humanity, such as deforestation and plastic pollution.

Dr. Lee’s lecture was held in the Miller Room of the Student Union Building on Oct. 19, and gathered those interested in the United Nations and global sustainability.

The Humpty Dumpty Institute’s Higher Education Alliance has helped bring 25 lecturers to Wilkes University to provide all students and faculty with various informal lectures and meetings through its six-year partnership.

Dr. Donald Lee is the president of the International Committee for Oct. 17, which promotes the International Day of the Eradication of Poverty. He is also the former Chief of Social Perspectives on the Development Branch of the United Nations Department of Economic and Social Affairs.

At the lecture, Dr. Lee spoke about building a sustainable world and overall global sustainability and its importance for our current and future generations.

“It’s an existential issue,” Dr. Lee urged, “it trumps any other social and economic issue you can think about, because if we don’t solve this problem there won’t be any humans left around.”

Dr. Lee introduced the nine planetary boundaries that underlie sustainable development and his talk as a whole. These nine boundaries enable humans to survive, incorporate all aspects of the world around us and are all affected by humans altering the environment.

“The sad news is, we raced past four of them,” said Dr. Lee.

Throughout his lecture, Dr. Lee talked about human involvement in altering the environment and how it is affecting higher sea levels, the acceleration of the heating and cooling phases, and dramatic increase in global temperatures. From here, he discussed the problems with modern reshaping of the animal world for our own needs whether it be for animal companions or for meat, eggs, and milk.

“Wolves are now being replaced with modern day animals like cats and dogs,” Awo said.“Years from now those animals might not be around.”

The reshaping of the animal population has caused deforestation to accelerate and remove the trees that help remove carbon dioxide from the air and help shade our rainforests.

Dr. Lee touches base on our plastic pollution problem in our oceans and even ventures into the seventeen sustainable development goals like poverty and hunger.

“I think it was a great talk,” Dr. Linda Winkler, Wilkes anthropology professor said, “he created some very compelling arguments.”

He reassured all of those fearing for future generations that we can change the course of the Earth in some ways.

“We have to think outside the box.”