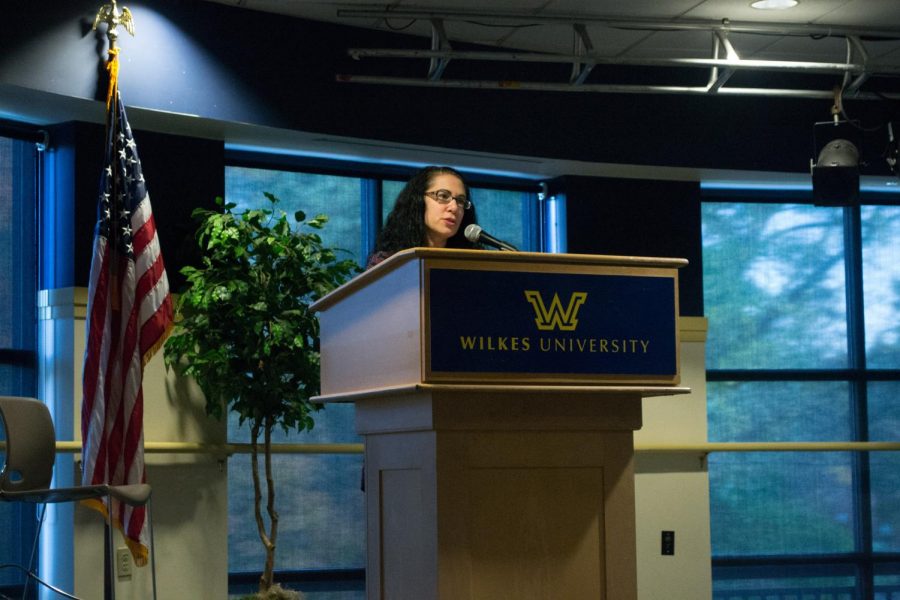 Susan Muaddi Darraj previously attended the university as a keynote speaker for the Women and Gender Studies Conference in 2017.

On Oct. 26, Wilkes University hosted Arab-American author, Susan Muaddi Darraj to discuss her life and award-winning book, “A Curious Land,” which deals with women’s rights and social issues involving minorities, as well as the way the two identities intersect — a book piloted by a number of FYF sections at Wilkes.

Darraj, a South Philadelphia native, daughter of Palestinian immigrants, graduate of Rutgers University and winner of the American Book Award, discussed her parents’ immigration to the United States and recalled her upbringing growing up as an ethnic minority in the United States.

“In 1967, my parents came to the United States looking for work, they wanted to stay only temporarily and save enough money to return to Palestine very quickly. This year, 2017, marks 50 years since they’ve been in the United States; because this country makes it impossible to leave, as many immigrants will tell you. There’s this fear that whenever someone goes to America to work for a few years, that they’ll never come; and they usually don’t,” said Darraj.

She also discussed the longstanding Palestinian-Israeli conflict, stating that it is not viewed as a religious conflict, but rather a colonial conflict.

When discussing her childhood, Darraj recalled the stigma associated with being a Palestinian-American.

“To say that being a Palestinian-American was a source of anxiety is an understatement… When I was growing up in the ‘70s and ‘80s, the world Palestine itself was taboo. When you told someone that you were Palestinian, this always triggered associations with terrorism and political unrest. If they even knew what Palestine was, it was always (for) something bad,” Darraj said.

Darraj alluded to the fact that Palestine cannot be located on a map, stating that this instance alone created several difficulties in explaining where she was from to others, which also created somewhat of an identity crisis for her.

Due to a lack of Arab-American role models in literature and media, Darraj looked to and received inspiration from African and Latin-American works and authors. Darraj found relatability in these writers’ description of isolation in American life.

“I could see that there was a clear line drawn in ways that I could be Palestinian and also be American at the same time in two different worlds,” stated Darraj.

She cited W.E.B. Du Bois as one of her greatest influences and specifically addressed his belief regarding “double consciousness” from his famous book, “The Souls of Black Folk”.

Darraj quoted this excerpt: “It is a peculiar sensation, this double consciousness. The sense of always looking at one’s self through the eyes of others, of measuring one’s soul by the tape of a world, that looks on in amused contempt and pity…”

Born Sosan Muaddi Darraj, Susan is not Darraj’s real name. She became known simply as “Susan” for the sake of simplicity and in a sense, belonging; a practice in which her brothers followed suit.

A first-generation college student, Darraj also recalled the difficulties she faced in college and encouraged students with similar backgrounds that they too could overcome these hurdles.

“What can literature do in the face of politics?” asked Darraj.

“Literature has a kind of power, it forces us to imagine. It reminds us that there are human stories behind the news stories and political headlines.”