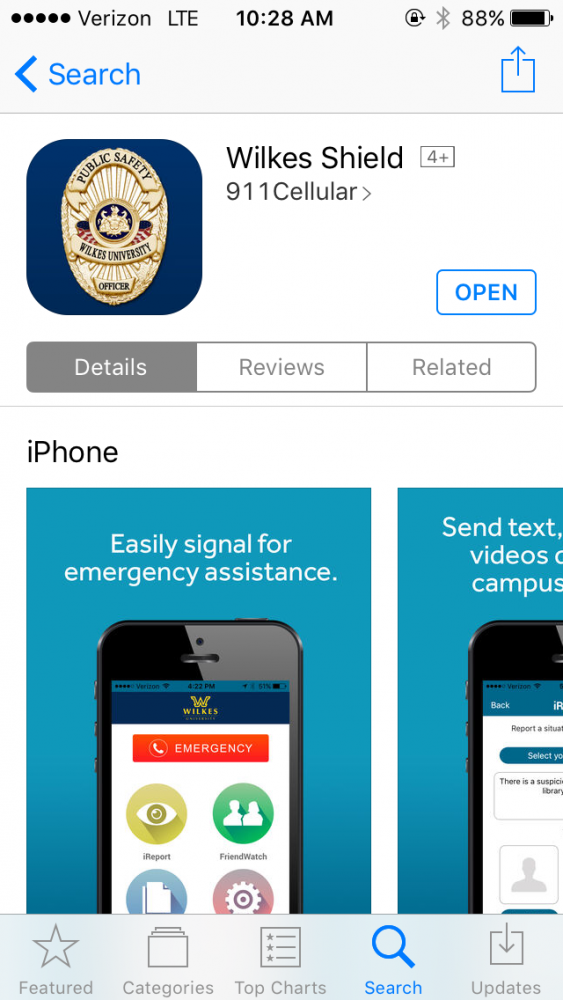 The app can be found in the iTunes app store, as well as in the Android app store.

Public safety officially launched an app called “Wilkes Shield,” in the interest of streamlining emergency management and maximizing campus safety. It is available for Apple and Android.

“It’s simple, and this is the way it’s designed. You don’t want to cloud it up with too many things to have to be involved in,” Jagoe said.

Jagoe explained that while all smartphones have GPS positioning, they can only show a generalized location. Indoor positioning works with access points around campus to give emergency responders exact locations of callers within buildings, expediting the process of finding those callers.

“The sooner we can get to you (in an emergency), the better,” said Justin Kraynack, chief risk and compliance officer.

Users can use the “emergency” function to call either public safety or 911 with the push of a button.

The iReport function allows users to submit a non-emergency report, with a photo or video if they wish. Users have the option to remain anonymous with this function, which allows the report of everything from stalking, sexual violence, drug and alcohol related issues, and suspicious persons, to general and safety maintenance.

Since the feature is text based, users may use this function in situations where they can’t speak freely. The anonymity adds the bonus of relieving bystander anxiety, Jagoe said.

“We understand that some people don’t want to be involved in things, but they want to let us know something is happening. This app works hand in glove with our bystander training, too,” he explained.

iReport also allows the option to include photo or video — which Jagoe does not recommend in critical situations, but can be helpful in situations like a suspicious van, which can be better identified by responders when a photo is included.

Friend Watch allows users to send a notification to three contacts when walking somewhere. The user enters where they’re going and approximately how long it should take, and their friends can track them via GPS.

The function checks in with the user when they should be approaching their destination, and the user has the option to extend the time. If the user does not “end” the walk on the app at the end of the allotted time, their friends are notified. Their friends can check in with the person or call public safety.

The app also includes links to all of the emergency management guides on the Wilkes website, so it is a one-stop-shop for all campus safety needs.

In addition to the safety features, Jagoe said he wanted to make the app useful in other ways to encourage engagement.

“To keep people interested, we’re trying to load this app up with other things you would go to it (for),” Jagoe said.

“I kind of see this sort of thing when I saw pepper spray come out. People go out and they buy it, and for a while they have it very close by, maybe on a key ring. Then it gets a little bothersome, so it winds up in a pocket, and then it makes its way into the purse, and then it makes its way down into the bottom of the purse, or it’s in a desk somewhere. That’s because you don’t use it very often,” he illustrated.

To ensure that students keep the app on their phone, even after long periods of time with no incident, it will include campus resources, including on-campus dining menus, faculty and staff directories, shuttle times, maps, financial aid resources and more.

“It’s more of a lifestyle app that I envisioned, in addition to the fantastic safety function,” Jagoe said. “All departments on campus will have some residence on this app. We will continue this throughout the year and over the years to make this a more functional piece for the campus.”