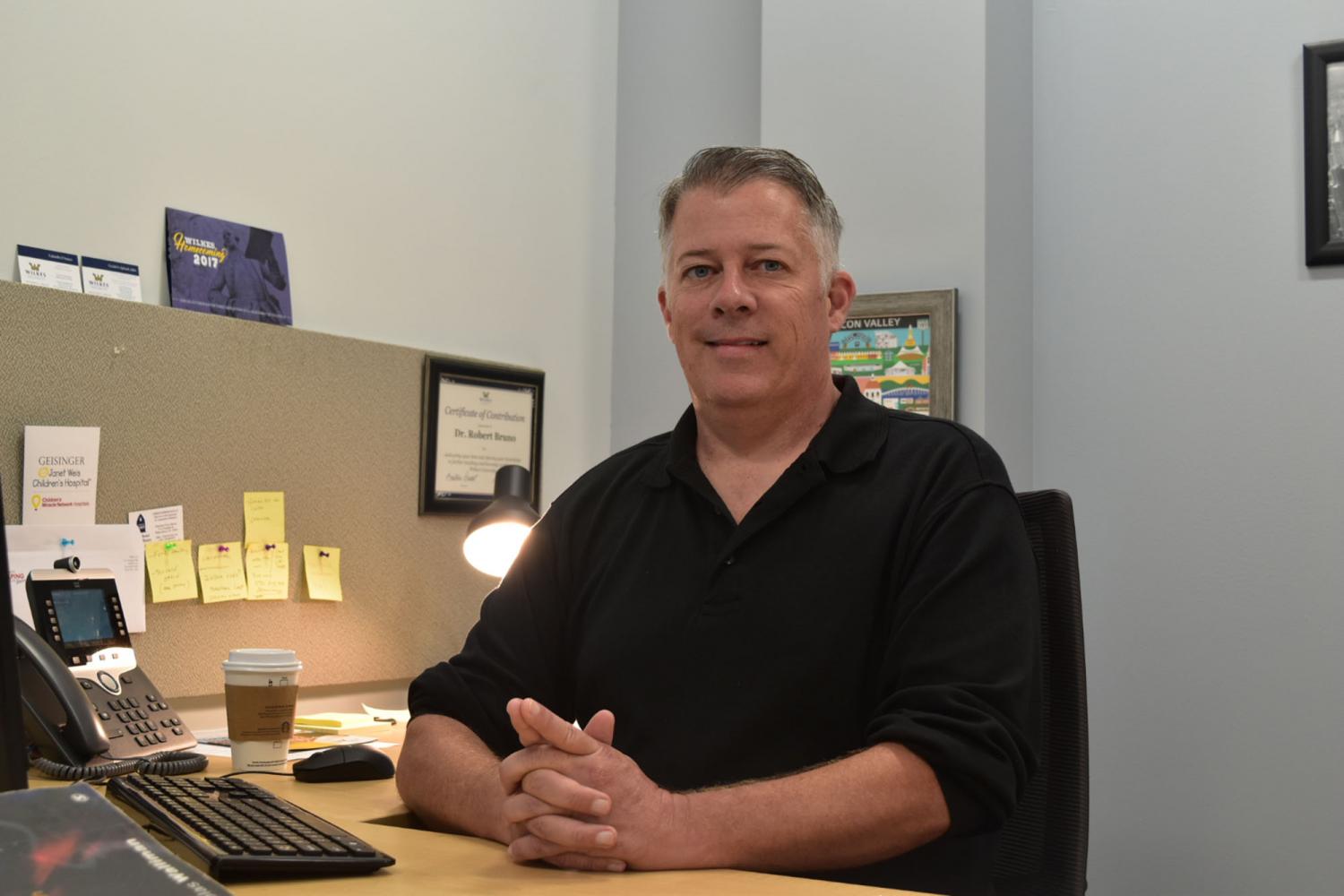 There’s a fine line between a student-professor relationship — a line seldom crossed, or one even explored. At times, it may be easy to lose the fact that there’s a person behind the podium.

Bruno, wearing a blue polo shirt tucked neatly into a pair of tan chinos, displayed his knowledge of and experience within the communication field as well as his passion for teaching.

Eating: a natural human function, we all must do it to survive. Most if not all of us have a favorite food. That is certainly the case for Bruno, who thoroughly enjoys both Mexican and Italian food; his favorite dish being spaghetti and meatballs.

A native of Toledo, Ohio, with an undergraduate degree from SUNY Stony Brook and a Master’s degree from Ohio University, Bruno fondly recalls his upbringing in Toledo. Some of his greatest memories are those of being outside, which explains his passion for sports and physical competition.

“Growing up in Toledo, some of my fondest memories were just being outside, whether it was biking, hiking, you name it,” he said.

Bruno’s favorite sports are tennis and baseball. Due to his Ohio roots, his favorite sports teams are Ohio State and the Cleveland Indians, who are currently in the midst of a 22-game winning streak. An avid sports fan, Bruno appreciates athletics across the spectrum, but tennis stands above the rest.

A former competitive squash and tennis player himself, Bruno understands the complex nature and artistry associated with tennis. Continuing the theme of artistry, when asked who his favorite athlete was, Bruno quickly replied with the following: “John McEnroe.”

“McEnroe was an artist, he could do just about anything,” said Bruno.

Aside from teaching, Bruno is also a fan of cinema, his favorite film being Alfred Hitchcock’s “Vertigo.” Despite his love of film, Bruno doesn’t have a favorite actor or actress. He instead appreciates the art of thespianism as a whole.

“I don’t have a favorite actor or actress, but I do appreciate good acting … There’s a difference, you can certainly tell when it’s bad,” Bruno said.

A professor of 11 years with seven years of experience in public relations, students of. Bruno may see his passion for teaching and his love of humor. This stems from his former childhood dream of becoming a comedian. Bruno reflected on such, and how in tandem with the inspiration of his mother, it eventually led to his desire to become a professor.

“I love making people laugh, as a kid I thought I wanted to be a comedian or a professional athlete of some kind … I think going into the present day, I’m now in the perfect position. My mom was a teacher. I can’t say I ever thought I’d ever become one as a kid, because I was such a brat in the classroom. So, this is my dream job, although I never thought of it back then.”

Since coming to Wilkes, Bruno has enjoyed the campus immensely. He took note of the culture, campus, staff, students, and facilities.

“The facilities are great; it’s a beautiful campus, but most importantly, the people are just fantastic. The faculty and students are terrific, just high class. There’s such a culture of friendliness and helpfulness.”