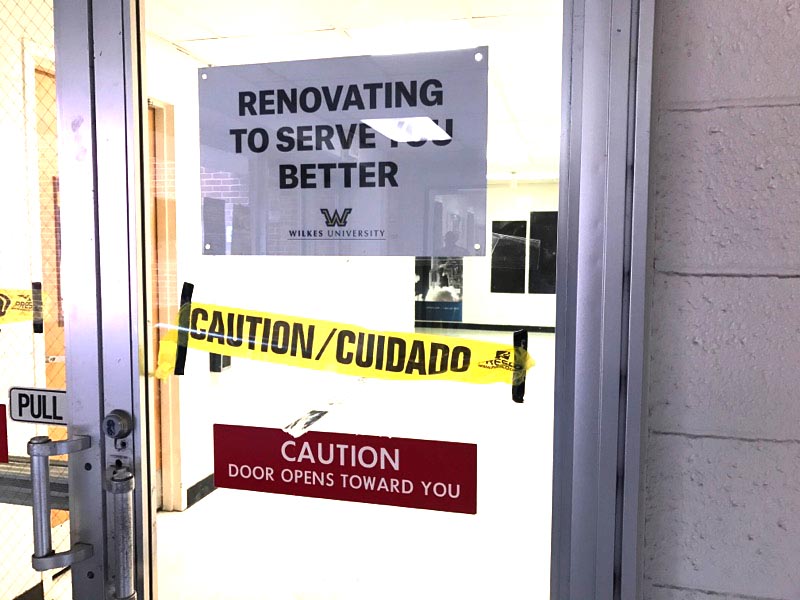 Most have noticed the closed off hallway in Stark Learning Center by now and have noticed the threatening yellow ‘caution’ tape draped over the doors. Early in the year, a press release was released notifying students of incoming renovations, but what is actually happening behind the scenes?

Recently, the university has begun a campus-wide improvement project, expected to total more than $10 million. The renovations will include the new Karambelas Media Center, which is to hold the Sordoni Art Gallery, as well as the Communication Studies Department and a number of its student-run organizations. The university also has plans to modernize Waller Hall, upgrade Schmidt Stadium and the Ralston Athletic Complex, implement more noticeable signage and improve the general infrastructure of the campus as a whole.

In the Stark Learning Center, major improvements are planned to enhance the student body’s learning experience. New classrooms will be added and old classrooms will get new carpeting, paint jobs, furnishing and technology.

While construction proceeds, a major hallway on the first floor is blocked, and many students have to take new routes to get to their classes.

The student body has a diverse opinion on the construction, with some finding it an aggravating obstacle in their day.

Joseph Earl, a freshman environmental engineering major, misses the efficient route the hallway gave when going through Stark to his dorm, Evans Hall.

“We want our long cut back,” he said enthusiastically when asked for comments on the construction. The ‘long cut’ being student-body-slang for the hallway.

Other students, such as Neil Murphy, a freshman psychology major, while thankful for the university’s improvements, questioned the construction timeline.

“It’s been under renovation, to serve us better, for three quarters of the semester. How much longer will it take?”

Still, other students are indifferent to the hallway. One student, Marlon Sanchez, a sophomore computer information systems major, doesn’t find the hallway intrusive to his daily routine.

“I don’t really take that way, but if they are trying to make it look better, by all means!”

Regardless of whether a student finds the blocked off hallway to be a major inconvenience or an after thought, everyone is excited to see the new classrooms, which are expected to be finished after this summer.