Tracing the history of the Justice Bell with Laurie A. Rofini 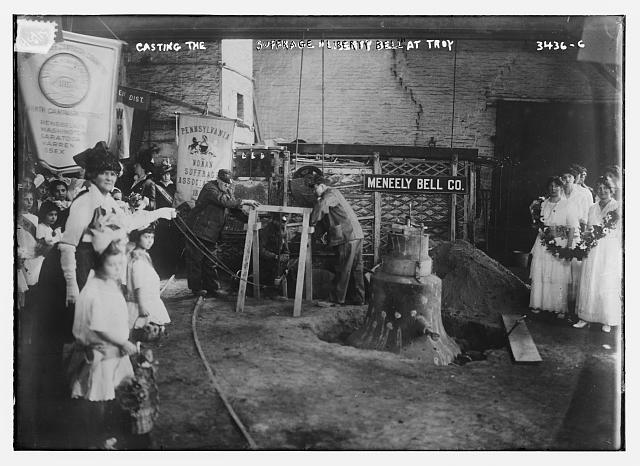 Courtesy of the Library of Congress

One of the photos Rofini shared from the Justice Bell’s tour of Pennsylvania. The bell symbolizes Pennsylvanian Women’s struggle for suffrage in the 1910s.

In honor of Women’s History Month, Laurie A. Rofini visited Wilkes University on March 21 to share the history of the Justice Bell.

The Justice Bell was the main symbol of the high point of the 1915 referendum, which is remembered as the highpoint of Pennsylvania woman suffrage activity.

It was meant to be a replica of the Liberty Bell. Although it does not have the Liberty Bell’s infamous crack, there is another important distinction between the two. The Justice Bell’s clapper was chained, preventing it from ringing and symbolizing women’s silenced voices. Suffragists vowed that the bell would not ring until the women of Pennsylvania could vote.

Tracing the history of the Justice Bell is an important piece of history to share with students, as it highlights Pennsylvania’s role in the overall movement to give women the right to vote.

The bell, which was bought by Katharine Wentworth Ruschenberger with her own money for $1,200, was announced in 1914 at a convention in Scranton. The announcement speech explained that the bell symbolized women asking not for privilege, but for liberty, and begged the question: “Will you do your share to unchain?”

Although Pennsylvania had its Woman Suffrage Association, Rofini explained that it admittedly had a “social club” feel to it and was not particularly successful in advancing the cause. When the women weren’t seeing much progress, they decided to emulate New York’s approach and “take suffrage out of the parlor and into the streets.”

They organized the National Woman’s Party and got it on the ballot. The next step was getting Pennsylvania counties to vote “yes” to the referendum on the upcoming ballot that would give women the right to vote in the state.

In an effort to personally appeal to all counties, the bell went on a tour of Pennsylvania for 130 days. At each county line, local suffragists would come and escort the bell in. The bell and suffragists would march through the town, with people standing on the back of it and speaking on behalf of women’s right to vote. These were seen as small, informal parades, and Rofini even showed pictures of the suffragists traveling through Luzerne County.

The parades were kept small in an effort to avoid the chaos seen in 1913 when Alice Paul organized a parade in Washington, D.C. the day before Woodrow Wilson’s inauguration. The parade became chaotic and even when women were being mauled, police refused to help. Although a scary occurrence, it was a big victory for suffragists in terms of public opinion, helping them gain more sympathy and support.

The tour ended in West Chester, Pa. This was chosen as the endpoint as it was seen as the bell’s home due to the first Pennsylvania women’s rights convention being held there in June 1852.

Although the referendum was defeated, the bell was taken to other states and used for promotional purposes. Rofini also pointed out that Luzerne County did in fact vote for women’s suffrage, but the “Republican machine” in Philadelphia played a large role in the referendum’s defeat. There were sample ballots given out in Philadelphia with almost every referendum being marked “yes” and the women’s suffrage one marked “no.”

After the ratification of the 19th Amendment, Ruschenberger’s niece, Katharine Wentworth, rang the bell at Independence Hall on Sept. 25. The bell was then taken to Valley Forge National Park.

The goal is to have the bell taken to Independence Hall in 2020 for the centennial anniversary.

In addition to overseeing county government records, she has curated several exhibitions for Chester County Historical Society on local women and social reform. Her publications include “The Woman Suffrage Campaign in West Chester” in West Chester, the First 200 Years: 1799-1999, which she co-authored with William R. Meltzer.