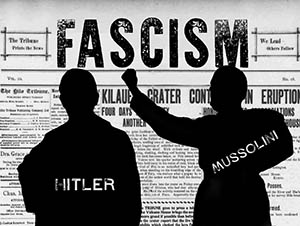 On Nov. 29, Merriam-Webster Dictionary tweeted, “‘Fascism’ is still our #1 lookup. # of lookups = how we choose our Word of the Year. There’s still time to look something else up.”

By the end of the year, their pleas were heeded: The word ‘fascism’ was trumped by the word “surreal,” as far as number of lookups go.

Peter Sokolowski, editor-at-large for Merriam-Webster, told The Guardian in December, “Spikes of interest in a word are usually triggered by a single event. So what’s truly remarkable this year about ‘surreal’ is that so many different stories led people to look it up.”

It’s possible that the same can be said for surreal’s runner up.

Fascism has arguably become something of a buzzword – it’s been written in op-eds, shared on the internet and written on protest signs a disproportionate amount in recent months.

What is fascism? Why is everyone suddenly talking about it so much?

Before throwing the word at President Donald Trump and his supporters, as many have, it’s important to understand what it really means, why it is that the term seems applicable and why it might not be.

The aforementioned dictionary defines fascism as “an authoritarian and nationalistic right-wing system of government and social organization.” However, as Assistant Professor of Global History and Languages Dr. Jonathan Kuiken puts it, there is a lot of “fuzziness” surrounding the definition in a practical sense.

“Part of the reason why it’s so easy to use that term is that it looks really different in different countries. There’s not really one set of fascist ideas,” Kuiken said. “In some places it takes the form of ultra-patriotic nationalism, in some places it even has a certain kind of religious messianic kind of thing.”

Kuiken used the example of Nazi Germany, one that most people are familiar with, where fascism took the form of racial hatred.

“Some things that kind of unify all of these different forms of fascism is a rejection of difference. You have to be the same in some way shape or form, either you all have to be Aryan racially as Hitler would say, or you all have to be super nationalistic, or whatever,” he explained.

Besides the gray area that defines what fascism is, leaving room for speculation and interpretation of reality, Kuiken feels that the word is being used more often than in the past because of the unorthodox nature of Trump’s presidency.

“I think whether you like them or not, everybody has to agree that they’ve thrown the traditional political playbook out of the window. That’s part of the reason people like Trump, and that’s part of the reason that people dislike him,” he said, adding that the shock associated with the election could have created crisis for some Americans.

Kuiken reiterated that Trump is not the reason why Americans should be wary of fascism, and that there is always reason to defend democracy and pay attention to threats. He added that the institutions of the United States are not strong on their own, but because people follow them.

“Should we be afraid of fascism? No, because fear is poison. But we should be on guard,” he said.

“Twenty-first century fascism, if that’s a thing, is not going to look like 1930s fascism,” he said. “If we spend our time looking for Hitler, we’re never going to see it.”

Kuiken stated that instead of looking for Hitler, people should be looking for infringements on freedom of speech, freedom of assembly, freedom of movement and freedom of the press, as well as the attempt to control judges. If that becomes the case, Kuiken said, perhaps it would be the time to worry.

But do Americans even still want democracy?

AmericasBarometer is a project of the Latin American Public Opinion Project which measures democratic public opinion in the Americas (North, Central, South and the Carribean).

The data indicates a trend suggesting that residents of the United States are becoming skeptical of traditional democratic values, such as political tolerance and support of the political system.

“Now you’ve opened the door to ‘why do we need this particular form of government? Maybe a strong man system… a strong, powerful leader… is what we need.’” Baldino speculated.

Baldino, along with other experts that he’s read, seem to think that if fascism were to occur in the United States, it would be not with a bang, but with a whisper.

“We don’t believe that what might come to America would be fascism per se – what’s more likely to happen is that Americans willingly give up some of their rights, freedoms, to a powerful leader and, in the process, America would transform itself,” Baldino said.

He explained that this makes sense, since the most basic reason for having government is to provide order and security.

“If enough people feel that they are unsafe, insecure, fearful… sure, some ‘strong man’ comes along and says, ‘I will make you feel safe. This is how we’re gonna do it: no free press, no freedom of speech, we’ll be able to lock people up without a trial.’”

Baldino said that it is way too early to be afraid of fascism, and that there are not enough of the warning signs associated.

He also encourages students and citizens in general to consume as much unbiased news as possible, and to make an effort to consume media that leans toward the opposite of their party affiliation.

While America remains a democracy, Kuiken said the issue of modern fascism is showing its face rather blatantly in Europe.

“If you look at what’s happening in Europe, it’s actually quite terrifying,” he said. “There are groups who are practically covering themselves in the fascism banner that are doing quite well.”

The National Front Party, present in France and whose imagery and ideas have been regarded by some as eerily similar to that used by the fascist regime in France during World War II, has been at the forefront as its leader Marine Le Pen is running for president. Kuiken says it looks like she might win.

The popular notion is that history repeats itself. Kuiken prefers the quote, usually attributed to Mark Twain, “history doesn’t repeat itself but it often rhymes.”