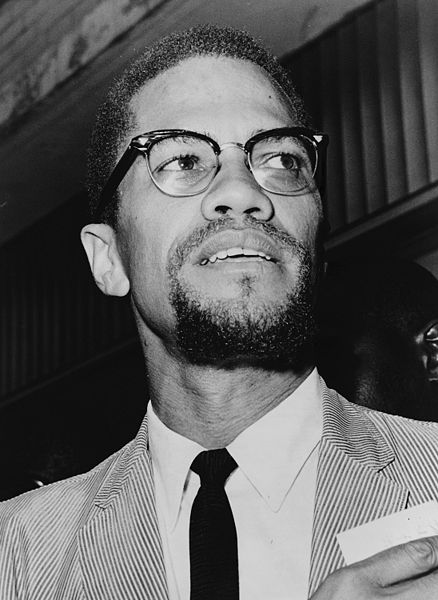 Malcolm X, an influential civil rights leader who was assassinated in New York on February 21, 1965.

The room is quiet, those in the audience are waiting anxiously and silently for the speaker to emerge from behind the curtain. A roar of applause fills the room, the audience rises to its feet.  A tall, powerfully built man walks to the podium. His very presence, without even uttering a word is commanding.

For just a moment, he stands gazing into the sea of spectators. In a loud, thunderous voice, the phrase “Assalamualaikum” reverberates throughout the Audubon Ballroom in Harlem, New York. “Mualaikumsalam!” in a loud, uniform voice is said in response.

As he begins his address, his thunderous voice sounds introspective and reflective, almost elegiac, yet fearless and unbending. An eloquent and potent speaker, he moves the audience to applause with ease multiple times, his message resonates with the crowd of 400. His wife and daughters are in the audience, sitting, listening, and gazing with admiration.

“Get your hand outta my pocket!” is yelled from within the audience, stopping the address in its tracks. An altercation ensues. The speaker from his pulpit, peacefully tries to resolve the conflict. Suddenly, a sound more powerful than thunder, one more closely resembling an explosion, fills the room. Again, for just one moment, silence…

The silence then gives way to the sound of gunfire and screams. The tall, powerful tree of a speaker, lie on the ground in a pool of blood, cut down in his prime. His wife and his children rush to his side, weeping, calling his name, but to no avail. The audience, angry, manages to detain and beat one of the assailants. At 3:30 PM, shortly after arriving to Columbia Presbyterian Hospital, he was pronounced dead.

Fifty-two years after his assassination, some feel that the legacy of Malcolm X (Formerly Malcolm Little) is as important as ever. In a time of political, social, and ever-present racial unrest, there are lessons to be learned from the slain icon. A former pusher, gambler, racketeer, prostitute, thief, pimp, and eventual convict, X transformed himself in prison through Islam; he became a leader.

Oft “villainized” and sparsely discussed, without X, it’s arguable that the Civil Rights Movement of the 1960’s would have been a microcosm of what it was, evidenced by his substantial following, constant media coverage, a controversial message, and clashes with other Civil Rights leaders.

At the onset, many found X’s message and views were radical and divisive. However, like a dynamic character in a good book, his message and mind-set changed as his life progressed. Under the leadership of Elijah Muhammad and the Nation of Islam, X encouraged and preached complete separation of black and white communities, even discriminatory sentiments towards whites.

The antithesis of Martin Luther King Jr. and his other Civil Rights counterparts, X did not favor a completely non-violent approach in the quest for progress.

He is quoted as saying: “Be peaceful, be courteous, obey the law, respect everyone; but if someone puts his hand on you, send him to the cemetery.”

After leaving the Nation of Islam in 1964 and converting to Sunni Islam, Malcolm X made a pilgrimage to Mecca and shortly thereafter, rejected the Nation of Islam’s sentiments and expressed an earnest and open desire to work with other black leaders in a unified fight for equality.

Just as any other black leader of this time, X’s days were numbered and he knew such. It wouldn’t be until less than a year later that X’s home would be bombed and then he would be assassinated, both by the Nation of Islam.

Dr. Diane Wenger,  associate professor and co-chair of global history and languages said, “Even gone, he was an inspiration to Black Power and those who were seizing the moment, who thought Martin Luther King wasn’t going far enough. I think he would have been a very positive figure in the (Civil Rights) movement.”

Malcolm X sought change and acted upon his desire. Always a student, X said: “I have always been a man who tries to face facts, and to accept the reality of life as new experience and new knowledge unfolds. I have always kept an open mind, a flexibility that must go hand in hand with every form of the intelligent search for truth.”

Many feel that Malcom X’s fight isn’t over. In light of incidents in Ferguson, Charleston, Miami, Baltimore, and a political administration that many fear will not fight on behalf of minorities, many would argue that Americans must stand together in the light of Malcom X and the leaders of yesteryear.

“(Now) It is important that we examine his (X’s) legacy… I don’t’ want to say history repeats itself, but if we don’t understand what has unfolded in the past and the adversity that African-Americans faced and overcame, we can’t understand their mind sets today,” Wenger said.

The legacy of Malcolm X continues, especially in the thinking of those in minority communities. In a time where minorities feel their rights are in jeopardy, Wenger said “It’s hard to stay patient. A lot of people are saying we can’t just sit back, we need to stand up.”

Sam Cooke sang it best, “It’s been a long time coming, but I know, a change is gonna come.”