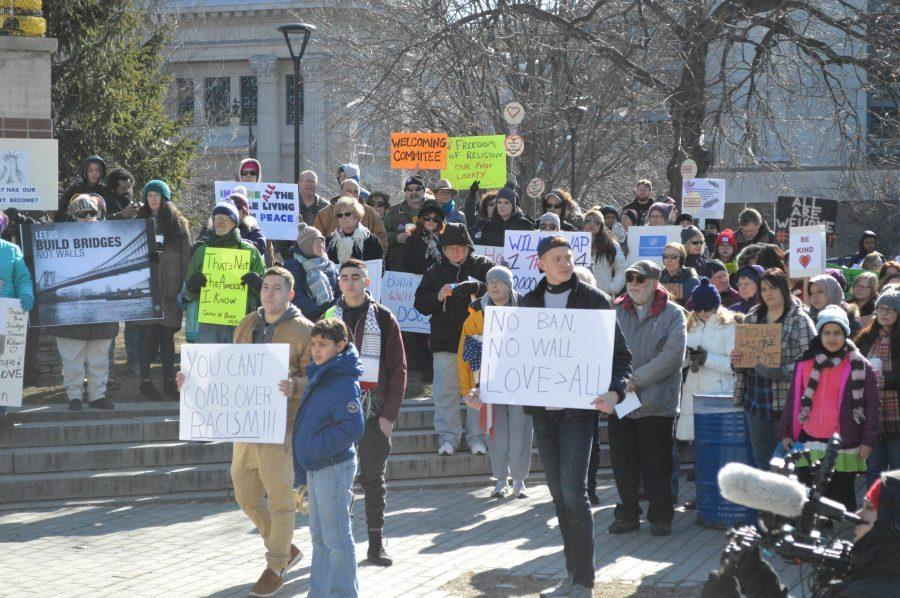 The order sparked controversy, causing protests everywhere. Critics (as well as some supporters) are referring to it as a “muslim ban.” Although the President’s order does not expressly indicate a ban on the entry of Islamic peoples, the aforementioned countries are largely muslim.

On the evening of Feb. 3, Judge James Robart, appointed by George W. Bush and presiding in Seattle, halted the ban with a temporary restraining order. His halt was effective nation wide.

“The opinion of this so-called judge, which essentially takes law-enforcement away from our country, is ridiculous and will be overturned!” Trump tweeted on Saturday morning.

“I don’t think it was well thought out or properly vetted by lawyers… the quickness, the rashness of it speaks to the issues that Trump is having now,” Kreider said.

“The question would be, do you have to wait until a horrific event occurs before you do something? You can say no, but at the same time, what is the reason for the seven countries?” said Kyle Kreider, associate professor and chair of political science at Wilkes. Kreider specializes in Constitutional Law.

No one in the United States has been killed in a terrorist attack by individuals from the seven countries listed in the order.

Trump has also stated that, under his executive order, favor will be given to Christian refugees, whom he said are “horribly treated,” which, for Kreider, makes the ban extra fishy.

For many, this predominance is enough to consider the order a good idea – that even one Islamic extremist is enough to cause concern regarding refugees and immigration.

“I believe that President Trump is doing what he campaigned on, was elected to do and feels is best to protect our Nation,” said Ron Ferrance, chairman of the Luzerne County Republican Party.

“Although he is being portrayed poorly in the media, he is taking some of the same steps that both former Presidents Obama and Clinton took when they felt it was necessary to do so.”

A similar ban ordered by Former President Barack Obama in 2011, cited by many supporters of Trump’s executive order, prohibited the entry of Iraqi refugees and suspended visas.

Former President Bill Clinton ordered immigration bans on countries involved in ethnic conflicts in former Yugoslavia and those who were said to impede democracy in Liberia in the 1990s.

Many critics of Trump’s order say it is unconstitutional on the basis of religious freedom, but Kreider has more constitutional qualms than that.

“I would argue that, as it was written originally, it is not constitutional,” he said, adding that one issue is with the Due Process Clause of the fifth amendment.

“When the American government infringes on the liberty of any person on American soil, they must follow basic procedures,” he said.

“I would argue that the executive order violates that, because the customs and the border officials at the airports didn’t know what the order required them to do, so there was disparate treatment across the countries because there were different interpretations as to what the order was requiring them to do.”

Kreider added that there was even confusion about whether the order applied to green card holders even among the administration.

Kreider also argued that the order violates the Equal Protection Clause of the Fourteenth Amendment.

“The government must treat similarly situated groups the same way. The order apparently treats Muslims differently than Christians, so there seems to be religious discrimination there, when there is no clear basis for why you would treat those individuals differently.”

Democratic Governor Tom Wolfe detailed his stance on the executive order during a press conference, held after meeting with a Syrian family, The Assali’s.

The Assali’s legally migrated to Allentown and have lived there for decades, but are affected by the travel ban.

“I think others can speak to the legal issues far better than I, but as a Pennsylvanian and an American, this is not who we are,” he added. “Pennsylvania is a place of welcome. The United States is set up to be a place where people can escape oppression. This is not a place people come to experience oppression and that’s what the Assali’s family members experienced.”

Wolf added that he was outraged.

“We are a compassionate nation, one built on legal and orderly immigration, and one which has always offered a place for people seeking better lives,” Barletta stated. “Unfortunately, our enemies know this about us and are seeking to use our generosity against us.

“We know that ISIS has expressed their intent to use our refugee program to sneak their fighters and sympathizers into our country because they know our security measures are lacking. We cannot allow this.”

Wilkes Administration is still unsure of what the executive order might mean for international students, and have not yet issued a response to its halt by Robart.

“Without clear understanding of what these immigration changes mean and how they will be interpreted and enforced, more questions have been raised than can be answered right away,” read a letter sent to students by President Patrick Leahy.

“We understand that for our international students, scholars studying on campus from a foreign country, or undocumented students studying at Wilkes, these changes in regulation create anxiety and concern.

“And, those on campus who care deeply for our international students and scholars, have also expressed their worry for how these policies will affect their friends and colleagues, and those from other countries who aspire one day to study at Wilkes.”

Dr. Paul Adams, vice president of student affairs clarified that the undocumented students Leahy mentioned were those attending Wilkes who entered the country legally, but whose credentials may have expired.

Multicultural Student Coalition President Santana Velez has plans for open discussion on the topic for students.

“Whenever there’s national events going on where people are marginalized we always talked about it and said ‘you are welcome,’” Santana said. “At our next club meeting I’m trying to do an open conversation type of event. I’ve invited one of the sociology professors. I‘m trying to get more people who can help guide the conversation.”

Leahy stated in his letter that concerned students are encouraged to contact the Center for Global Education and Diversity, the Provost’s Office, or the Office of Human Resources.