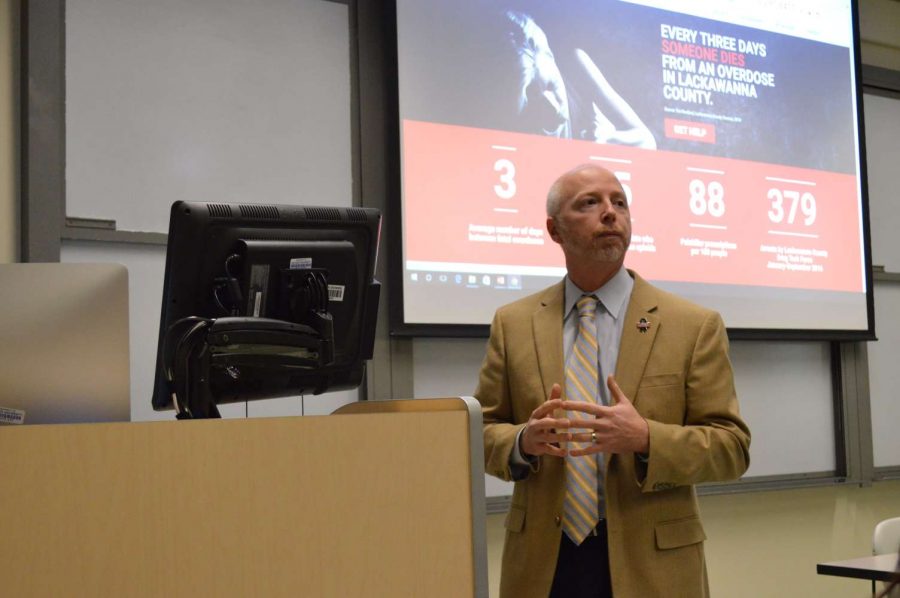 Pennsylvania is the home of the famous groundhog Punxsutawney Phil, housed the first home computer in 1946, and contains the nation’s original capital, Philadelphia.
Pa. is also the home of the most deaths by drug overdose in males between the ages of 17-25.
Lackawanna County District Attorney, Shane Scanlon, visited Wilkes on Nov. 17 to deliver a presentation focusing on his community initiative, “Heroin Hits Home.” The initiative aims to put an end to the “major heroin epidemic” that is affecting both Lackawanna and Luzerne Counties.
Last year, the number of overdose deaths in Lackawanna County nearly doubled. Scanlon said that the county is on a path to get even worse.
Since being appointed to District Attorney, Scanlon said that he “watched the heroin epidemic balloon into what it is.”
During the talk, Scanlon addressed the problem of prescription pain pills, citing that 75 percent of all individuals with heroin addictions get their start on prescription opioids, often prescribed legitimately by physicians.
Scanlon explained that he has been delivering these talks to schools and colleges since January, his mission being to “let people know that heroin is what is doing this,” and that “it really doesn’t care” about age, race, occupation or what a good family one grew up in.
“We are losing people from every walk of life… and it is really, really sad,” Scanlon said. “It is a truly lonely place when you’re watching a loved one die every day.”
To help ease that loneliness, Scanlon launched the website, heroinhitshome.com, to be a “one stop shop” for resources; everything from information for Alcoholics Anonymous meetings to lines for tips to police.
Another important topic discussed by Scanlon dealt with the ways in which law enforcement has been failing those with heroin addiction.
He explained that the system gives “no service to drug addicts,” describing a cycle where an addict is arrested for retail theft, taken to prison without the addiction being treated and is released. This is followed by another arrest for retail theft, and the cycle continues.
“Imagine if we actually started treating the underlying causes,” Scanlon said. “We are never going to arrest our way out of this crisis… we have to treat our way out of this.”
For more information, visit heroinhitshome.com.