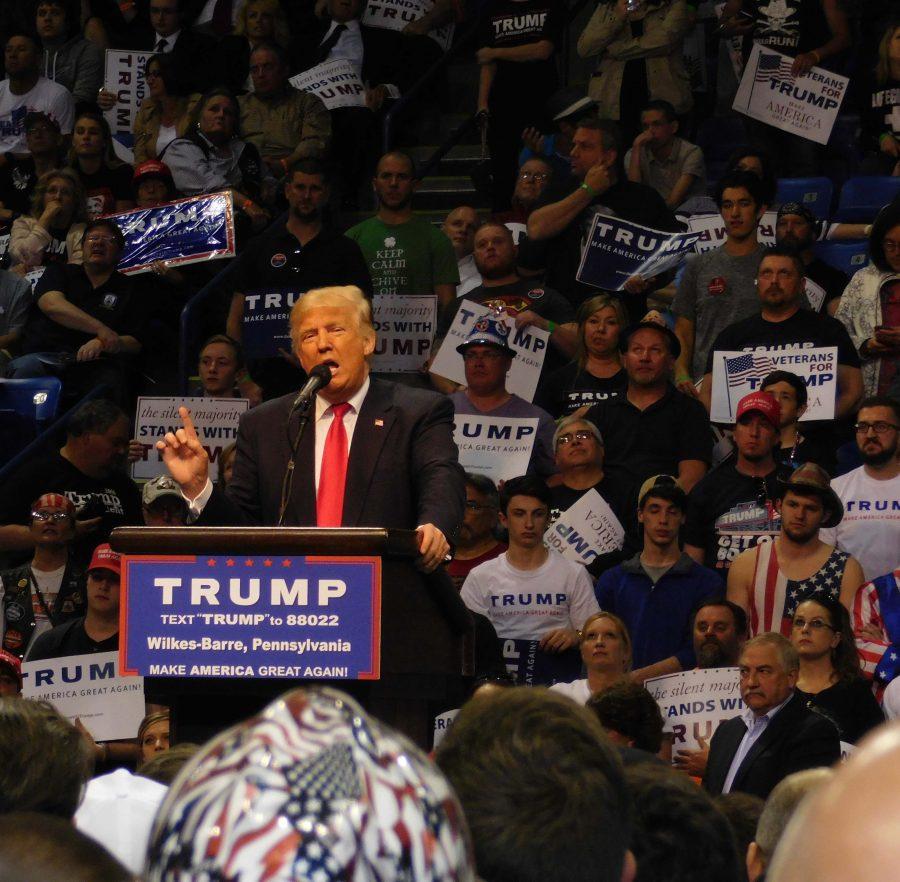 In the early morning hours of Nov. 9, Republican nominee Donald J. Trump was named the 45th President of the United States of America.

According to unofficial results from the Luzerne County Bureau of Elections 38.55 percent of voters selected Democratic nominee Hillary Clinton and Tim Kaine while 57.95 percent of the vote went to Trump and Mike Pence. According to CNN, Trump received 290 electoral votes with Clinton receiving 232.

With the nation in shock over the Republican nominees victory, uncharted by the media as most polls had Clinton ahead, the Trump win has left some in despair while others are optimistic for the future.

“I saw my country die. I watched as we gave into the hate and division,” said Wilkes sophomore secondary education and history major and Clinton campaign volunteer Ian Valles. “I am thoroughly disgusted with America. We have elected a demagogue, who treats women, racial and ethnic minorities, Muslims, Jews, the LGBTQ Community, with sheer disdain and ambivalence.

“The United States of America that promised equal rights and protections is gone, and I no longer consider myself to be a willing American citizen. I am merely a human being, trapped in the United States.”

During her concession speech on Wednesday, Clinton called for her supporters to give the president-elect a chance and to continue to support American democracy.

“Donald Trump is going to be our president. We owe him an open mind and the chance to lead. Our constitutional democracy enshrines the peaceful transfer of power,” Clinton said. “We don’t just respect that. We cherish it.”

Emma Leach, a senior political science major who is currently an intern in Washington, D.C. at the Republican Attorneys General Association explained that as a female conservative, she was not expecting the Trump win but is hopeful for the future.

“I was sitting in a republican war room, less than five minutes from the White House, I saw the crowds of people,” Leach said. “I was surrounded by people who have dedicated their entire careers to GOP campaigns and they too were in disbelief. My office planned for a Hillary victory. I planned for a Hillary victory. I didn’t think I would see a red electoral college for a long time. (The) experience last night was a privilege, seeing the fear, shock and to some pure joy is a memory I will never forget.

“Thursday I get on a plane to Texas to attend a meeting with the Republican Attorneys General whose careers will also change. As a female conservative my life will change from here on out. What happens to my carer is in the hands of President Trump.”

With thousands across the United States protesting the Republican win carrying signs with slogans of “Not My President”, “Nasty Women Fight Back”and yelling chants of “Impeach Donald Trump” at the entrance of the  Trump International Hotel according to USA Today, the future of Trump’s presidency remains unclear to some.

Wilkes University professor of political science Thomas Baldino explained that the future of the Republican presidency will rest in his style of governance.

“The next four years will be challenging for President-elect Trump depending upon how he decides to govern,” Baldino said. “If he decides to defer to the Republican congressional leadership (Ryan and McConnell), then the laws passed by Congress and signed by Trump will not appeal to Trump’s voters. Things like new trade agreements, privatizing social security, means-testing Medicare, and immigration reform that doesn’t keep out all immigrants will hurt working class voters. If Trump decides to push his populist agenda in Congress, the Republican leadership will block it.”