Living with ALS: Losing muscle but not his spirit 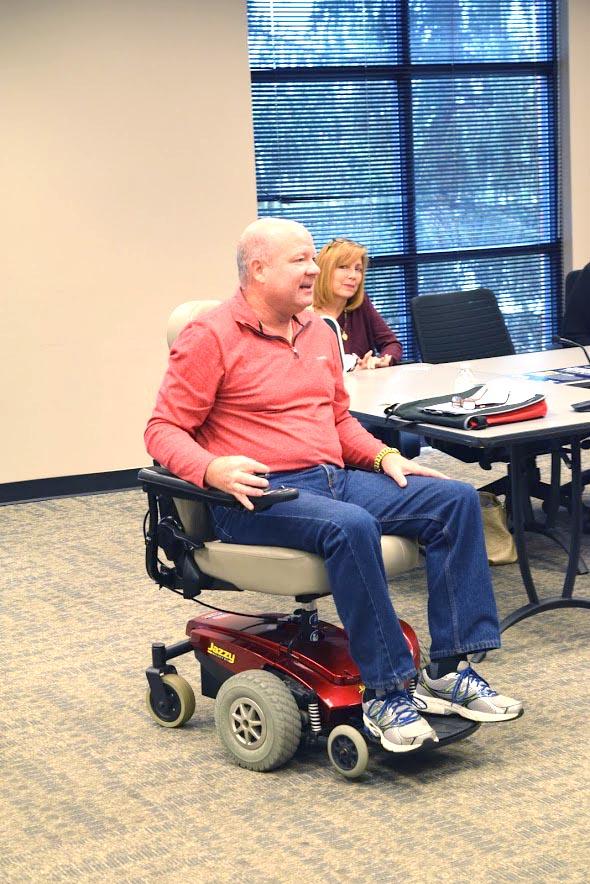 Paul Miller and his wife, Eileen, speak to Wilkes students about ALS to raise awareness.

Approximately 5,000 people are diagnosed with ALS every year. The odds of being diagnosed are three in 100,000. Of those diagnosed, 61 percent are male and 39 percent are female.

Paul Miller provides a face to put to the disease and was eager to share his story with Wilkes University students last week, hoping to raise awareness, advocate for a participation in fundraising and, maybe most importantly, just have a chance to have someone to talk to about the terminal illness that turned his life upside down.

Miller, 59, was diagnosed with amyotrophic lateral sclerosis (ALS), more commonly known as Lou Gehrig’s disease, in August 2012. His first symptom was in December 2011 when he tried to run to his car to shield himself from the rain and was unable to, something uncommon to a previous half marathon runner. More recently, his shoulders experience pain and his arms feel heavier, a sign that it is spreading to the upper half of his body.

According to the ALS Association, ALS is a progressive neurodegenerative disease that affects nerve cells in the brain and the spinal cord. The progressive degeneration of the motor neurons in ALS eventually leads to their demise. When the motor neurons die, the ability of the brain to initiate and control muscle movement is lost. This can cause people to lose the ability to eat, speak, move and breathe.

During the seminar hosted “Awareness, Learning and Speaking for Those That Can’t About ALS,” Miller shared his story with Wilkes students.

Miller did not have the gene for ALS, meaning he did not inherit it. Although the cause for ALS has yet to be determined, studies are getting closer to possible explanations. One explanation that Miller believes triggered his ALS, although it has not been cited by medical professionals, is stress. A statistic he used to support this claim is that veterans, who experience immense amounts of stress, are diagnosed with ALS twice as often as other people. Miller also has his own experience to support this belief.

Two years prior, his 21-year-old son was killed in a car accident in which the other driver was distracted. Since then, he and his wife have educated people about distracted driving and advocated against it. The stress and pain of this was vast, and he believes it triggered his ALS. As he continues to battle with the disease, he noticed that his worst moments are in times of stress or depression. For example, when he was told by doctors that he could no longer drive, he became depressed for two weeks. He had to snap himself out of it, however, as he said he could “feel his muscles dying,” a sign of his ALS spreading.

ALS is different for everyone, Miller explained. It is predicted that ALS patients will have approximately two to five years to live, and fifty percent of patients die within two years of their diagnosis. There are people that he knows, however, that have been living with it for over 10 years. It can progress slowly or quickly. In Miller’s case, it is progressing more slowly, as four years post-diagnosis he is still self-sufficient. He is able to feed and dress himself, and even goes golfing occasionally.

But his life is much different than other’s.

He shared that he was getting winded speaking to students, and that when he stands up he experiences severe muscle spasms, which get even worse with cold weather or in air conditioned rooms. Muscles grow weaker and heavier and there are no exercises or physical therapy to counteract it. He has been using a motor chair for 90 percent of the time since April. He experiences excess mucus, which can lead to pneumonia. It is a disease that has no cure and will eventually claim the lives of those that have it, but Miller learned early on that a positive attitude was everything.

“I’m a fighter,” Miller said, explaining that he tries to remain himself in every aspect until it is too dangerous for him to do so, such as driving and golfing.

ALS does not affect patients’ senses, heart, liver, kidneys or mind. In other words, even in the end stages when they are completely paralyzed and need constant help by their caretakers, they are completely aware of what is going on. Miller described this as being “trapped” in their own bodies.

Miller described how difficult it is to live with ALS, as even when it is manageable he lives in constant fear. If he is short of breath or has muscle aches, he immediately worries that his ALS is progressing.

“ALS dominates my life,” Miller said. “I have to worry about every step.”

Although Miller has an illness that currently has no cure, he remains optimistic and upbeat. He chooses to spend his time raising awareness about this disease rather than letting it control him. Even though he has no say in how it affects his body, it’s clear that he is very careful as to how he lets it affect his mind. He explained how he tries to keep his mind occupied, tries to get out of the house as much as he can, and loves to socialize.

His wife and caregiver, Eileen, joined him at the seminar and gave a brief look into her role in his life. When he stood to demonstrate what walking looks like for him, she was close behind holding onto his belt loops as a way to stabilize him. She spoke of common fears she has, such as him choking. One particular hardship they have had while adjusting to her husband’s diagnosis, she said, is the reactions of her friends and family.

“They distance themselves… I just think they don’t know how to treat us,” she explained.

This is one of the hardest parts, and that she wants people to know the best thing they can do is just show up. Any little bit helps, as even tasks such as shoveling snow or bringing in groceries is now extremely difficult. They also just want to have any sense of normalcy and socialization, which is something they have lost as people don’t know how to react to the trauma that they have faced, both with their son’s death and Miller’s diagnosis.

“We chose not to sit around and cry about it but to go out and fight and raise awareness,” Eileen said.

Miller gave in-depth explanations about how ALS affects the body. About how muscles slowly die, about how in the end stages patients cannot feed themselves, cannot dress themselves, cannot speak and cannot breath. He explained the difficult reality of the disease, but he also demonstrated the hope, strength and spirit that counteracts ALS.

Miller’s attitude portrayed the one thing that ALS cannot take away, if you are persistent in not allowing it to.