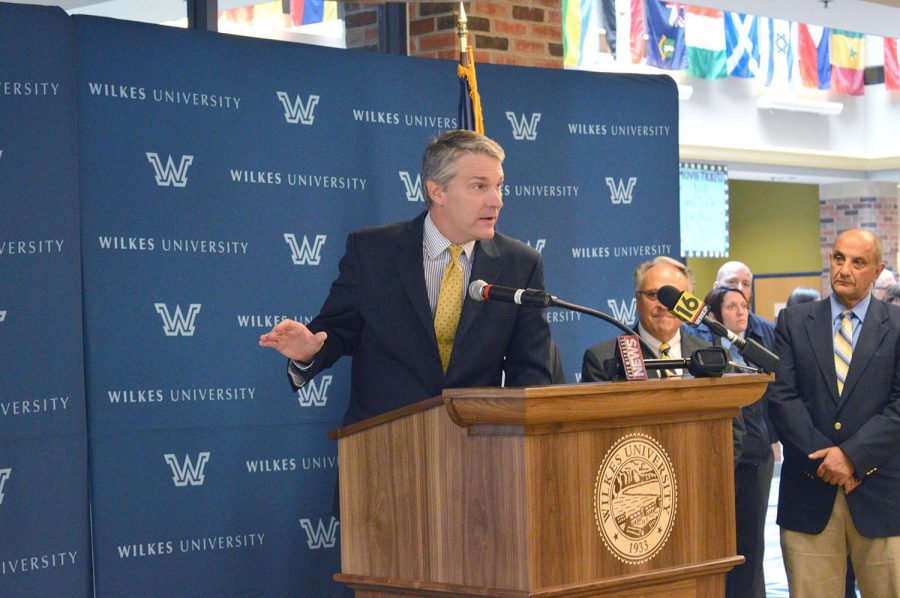 President Patrick F. Leahy announced on Friday a new, $3.5 million dollar project that is scheduled to begin in May 2017  and to be completed by fall of 2018.

The project, Leahy announced, would be the creation of a South Campus Gateway. The gateway, he said, would not be dissimilar to the East Campus Gateway which connects South Main Street to the heart of Wilkes campus.

The South Campus Gateway will connect The Henry Student Center to Stark Learning Center, and then turn a corner all the way to S Franklin St.

In addition, the area around the Student Center will be redesigned, including a change to the flow of traffic, to create a more “pedestrian friendly” space surrounding campus.

Leahy said that it is for safety, to alleviate traffic congestion, improve aesthetics and the benefit Downtown Wilkes-Barre community at-large.

Leahy stated that the project would not be possible if not for the funds from the state, which the university will be matching “at least” one to one.

“These are funds that may not otherwise come to downtown Wilkes-Barre, if not for a private institution’s match,” Leahy conjectured. “I think this demonstrates, quite effectively, the continuing power of public/ private partnerships in the effort to continue to develop our fine city.”

Leahy explained the importance of a safe gateway in this area of campus.

“This is one of the most trafficked arteries of our campus, and we want to make sure all of our students, faculty and staff and members of the community who cross here regularly to cross in perfect safety,” Leahy said.

Leahy’s announcement was followed by a few words from Dan Cordell, Chairman of the Board of Trustees, State Representative Eddie “Day”  Pashinski, Sen. John Yudichak, Mayor Tony George and Student Body President Allie Grudeski. Each speaker was introduced by Michael J. Wood, special assistant to the president. Each speaker had nothing but positivity about the news.

“We are so blessed here at Wilkes University to have the kind of support that we have from these three fine public officials,” Leahy said, speaking of  Pashinski, Yudichak and George.

This is just one of many renovations which have taken place since 2014, alongside the renovations of the Stark Learning Center and Passan School of Nursing, the East Campus Gateway which was opened during homecoming last year, and the addition of the campus Starbucks.

Some future endeavors, according to Leahy, include the creation of the Karambelas Media Center and new Sordoni Art Gallery within the old Bartikowsky Jewelers building. He also mentioned further renovation of the Stark Learning Center which will be taking place over the next few years.

Mayor George spoke in depth about the ways in which the City of Wilkes-Barre and Wilkes University are codependent, and asserted that the campus renovations would make the city even better.

“We have an enduring goal to become one of the great small universities in the country, and this announcement today of our South Campus Gateway project is just the latest in the series of efforts we think will help us get there,” Leahy said.