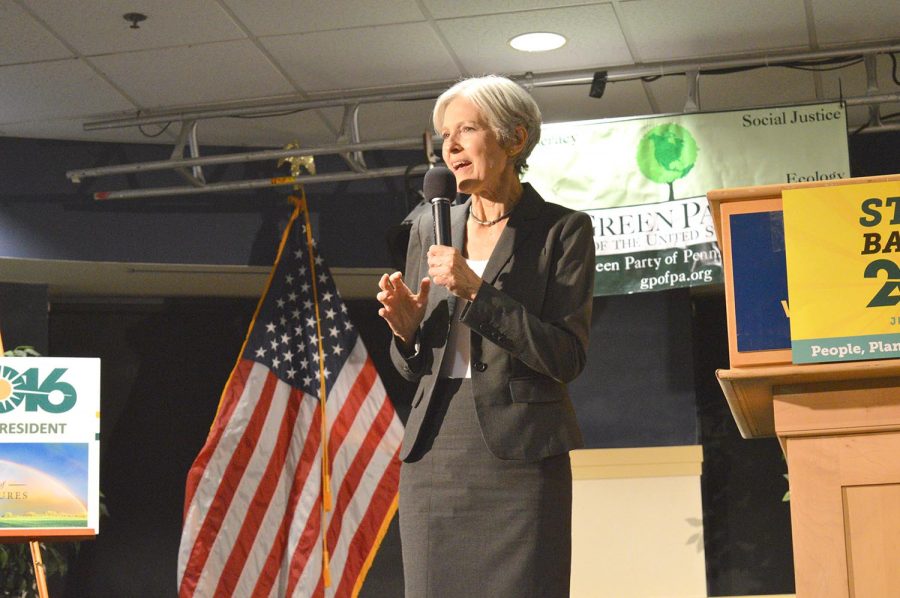 Stein’s address focused primarily on domestic and foreign policy. She discussed her involvement in the protests surrounding the Dakota Access Pipeline, her views on how to prevent war, environmental initiatives, bailing out students in loan debt, ending the war on drugs and much more.

Stein put a large focus on the interests of college students, saying that if every young person buried in student loan debt voted for her, they could be bailed out. She asked if anyone in the crowd knew that, and very few raised their hands.

Stein received many cheers as she discussed her views on ending fracking, legalizing marijuana, universal healthcare and proposing a “peace offensive,” which she said includes a weapons embargo.

The master of ceremonies during the evening was Gabriella Romanelli, a Wilkes alumna and member of the Green Party.

Her uncle is Carl Romanelli, who ran as a Green Party candidate for the US Senate in 2006. Gabriella described her experience discovering the Green Party in college.

“I was angry… that was me really becoming into feminism and green things. I would talk to [Carl] about the things that I was angry about and the things I was learning about politics, and I realized he was angry too,” she said.

“I learned from him that I didn’t have to just be angry, and that there was a party that reflected my views,” she added.

Romanelli thinks that college age students have the power to bring the Green Party to the forefront of the election.

A popular topic at the address was the observation that many voters are making an effort to vote for the lesser of two evils, which Stein and her supporters think is a non-democratic result of a corrupt system.

During her speech, Gabriella shared a story about tenth and eleven graders that she was substitute teaching. The students were discussing politics.

“I noticed that they weren’t debating who would be the best candidate, but who is the worse of the two,” she said.

This sentiment was shared by sophomore political science major Dominic Butchko, who sits on the city council in Forty Fort.

“I am a registered democrat… I was a Bernie supporter, and [Jill Stein] seems like the next best thing,” Butchko said. “I’m exploring my options, I think it’s my duty as a good American. Country before party.”

Stein addressed the problem, saying “Democracy is not a question of who we fear the most and who we hate the most.”

Stein’s speech was preceded by those of Jay Sweeney, Yahne Ndgo, and Carl Romanelli.

Yahne Ndgo is a singer, writer and public figure who has been featured on CNN for her political views and discourse. During her address, she discussed institutionalized racism and other forms of discrimination in The United States, advocated for the Black Lives Matter Movement, and explained that Jill Stein is the candidate that will be the best proponent for social justice.

She opened and closed her speech with a quote from Assata Shakur: “It is our duty to fight for our freedom. It is our duty to win. We must love each other, and support each other. We have nothing to lose but our chains,” she quoted.

Carl Romanelli shared stories about the Vietnam War to illustrate his anti-war sentiment before reiterating that the power of democracy is in the hands of the voters. He cited the outrageous support that Bernie Sanders received from college students and assured audience members that it doesn’t have to end.