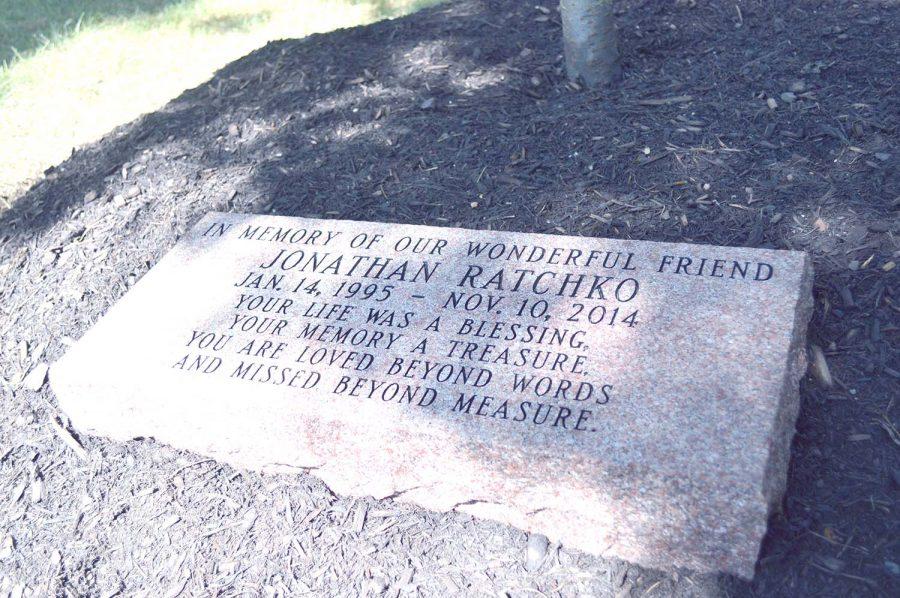 The memorial dedicated to Jonathan Ratchko that lies under the tree outside of Kirby Hall.

A crowd of a fallen Colonel’s family and friends filled the walkway passing Kirby Hall Friday morning, sharing stories, hugs and tears in memory of their friend and son.

“I can feel him here,” a friend said as a light breeze interrupted the heat of the brightly-lit day.

It was what the crowd called a “perfect day,” with the sun shining down, reflecting off the gold plaque of the new bench that read “In memory of our wonderful friend Jonathan Ratchko.”

On the evening of Nov. 10, 2014, Ratchko was found dead in Ross Hall. The Luzerne County Coroner’s Office ruled no foul play was involved.

Two years later, the weight of his loss is still felt on Wilke’s campus. The university shared the sentiments of family and friends as they agreed to dedicate a bench and tree to the former student.

“We always say that when you come to this school you’re a lifelong member, and even in a case as tragic as this one, Johnny will remain a lifelong member of this community,” said President Patrick Leahy.

Also among the crowd were Ratchko’s parents, friends and Vice President of Student Affairs Paul Adams.

Jillian Ehret, who was a close friend of Ratchko, was a big part of putting the memorial together.

“I’m grateful for the beautiful memorial on campus, especially because Wilkes is where we got the closest. His spirit is with me everyday and I’ll be walking for the both of us come graduation.”

“I believe Johnny has shaped all of us who knew him. I know he has become a part of my life and part of my family’s life and will always be remembered as part of the Wilkes community,” said Vice President of Marketing Jack Chielli, whose two children, Maria and Anthony, were close friends of Ratchko’s.

Adams spoke of the opportunity to attend the dedication a “privilege,” saying he didn’t think there was a better location for the bench and tree placed in Ratchko’s honor, as they were alongside one of the most heavily-trafficked areas of campus.

The dedication concluded with the soft words of Ratchko’s mother. Through tears and shaking hands, she shared her thanks and gratitude for everyone that contributed to the memorial. As she spoke, tears filled the eyes of those who surrounded her.

“Please use this space for peace during your time here,” she said.

After the group dispersed, Leahy shared an embrace with Mrs. Ratchko, ensuring her that the university would “take care of it,” in reference to the memorial.

Chielli paraphrased a quote from poet Mark Nepo that he felt paralleled the situation. “We can let go of the deepest things that matter to us because they have already shaped us and become part of who we are.”