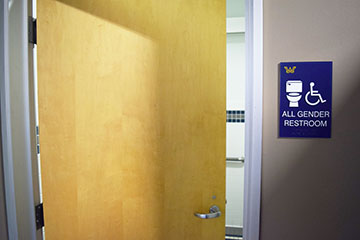 The relabeling of the family restrooms around campus to be all gender is just the start of nondiscrimination amendments.

Students may have noticed the new all-gender bathrooms scattered around campus. Transgender and gender-nonconforming students may be excited, but the reason why these new signs have been introduced could start them rejoicing.

Dr. Helen Davis, an associate professor of English who identifies as queer, took this opportunity to make changes she thought positive for the transgender and gender nonconforming students at Wilkes, and immediately contacted Samantha Phillips, Wilkes University’s Title IX coordinator.

“We are lucky enough to have a full-time Title IX coordinator. That isn’t common in small schools,” Davis said. “When I contacted Samantha Phillips, she already knew all about it, which was great.”

Davis told Phillips that there were certain things that could be done in response to the clarification that to ensure that transgender and gender-nonconforming students are “comfortable and accommodated.”

“I suggested that we have all-gender restrooms on campus that are clearly marked, and everyone was very accommodative of that,” Davis said.

That was when a task force was formed, which included the Provost, Associate Provost, and Director of Residence Life, as well as Davis and others.

The next issue involved logistics as to what the restrooms would be called, what the sign would look like and what picture would be used.

“For coding purposes there needed to be a picture on the side,” Davis explained.

A stick figure that was half male and half female was suggested, but Davis felt that this was still too binary, not being inclusive to gender nonconforming students.

“I suggested they use a toilet, because it is a representation of what the facility is that is very clear, and that is not gendered in any way,” she said.

Around 40 gender-neutral bathroom signs have been added on campus.

“This is phase one,” Davis said.

The all-gender bathrooms are the single-use, “family” restrooms which have always been on campus.

“We’ve been lucky on this campus that we had these restrooms the whole time,” Davis said.

The physical changes, like the signs, are clear evidence of changes, but Davis stressed the importance of the underlying causes which created them.

“We can talk about this in terms of bathrooms, but it’s much bigger than that, and that’s important to know,” she said.

Davis explained that many responses to the clarification are still in the works, including the ability of students to use their preferred names on attendance sheets and their emails, the abolishment of mandatory gendered formal dress in certain programs and more.

“Wilkes University values and encourages an open and inclusive environment for all students.  The University embraced and encouraged a supportive, safe, and nondiscriminatory community prior to the issuance of the Dear Colleague Letter on Transgender Students this past May,” said Phillips.

“Our goal, however, is to go above and beyond the recommendations contained in the Dear Colleague Letter.  Accordingly, we have been reviewing policies and procedures utilized across the campus in an endeavor to further enhance our inclusive community,” Phillips explained.

“Among other things, we are working on updating the website, creating a campus restroom map, and providing more streamlined processes to access the resources we have to offer students.  I am, of course, always open to suggestions and new ideas for making sure we sustain a campus culture where all students feel welcome.”

The bathrooms may be just one change among many possible changes, but the effect is still profound for some students, such as genderqueer student and senior psychology major Elliot DeMesa.

“I definitely think it’s a step in the right direction,” they said. “For someone who identifies as nonbinary, it feels great that our culture is moving toward an atmosphere in which there are fewer instances that I face having to be boxed in one gender category, even in such a small way such as nonbinary bathrooms.”

DeMesa added that their comfort level on campus is mostly good.

“I have a great support system with my girlfriend, friends, and RA and e-mentor staff. I don’t feel as though my identity as a queer person has limited or disadvantaged me in any way through Wilkes, nor do I feel like my identity puts me in danger here,” they stated.

One issue DeMesa does face is being misgendered, which is when a person refers to a transgender or non conforming person as a gender other than their own, uses gendered pronouns that don’t describe them, or uses a name that they no longer identify with.

For more information on what is in store for students as a result of the Title IX clarification, contact Samantha Phillips at [email protected]

Editors note: The use of the pronoun they is used in this story in reference to an individual who does not identify as he or she.