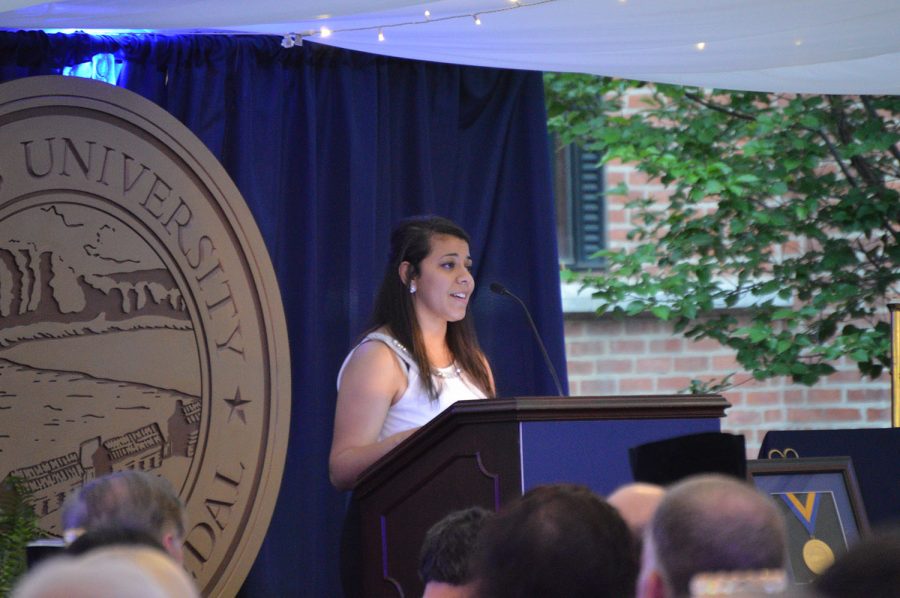 On June 4, Colonels of the past, future and present gathered with friends and donors at the Westmoreland Club in Wilkes-Barre, Pa. for the third annual Wilkes University Founders Gala.

An evening filled with excitement, the event took place as part of a fundraising effort for the First Generation Scholarship. With the event selling out, the funds raised totaled $360,000.

This year Youstena Zaki was the student speaker and one of the recipients of the First Generation Scholarship.

Detailing her move from Egypt to the United States, Zaki said her family soon learned that their lives would forever be changed.

“We thought our life would be perfect, like in the movies,” she said.

However, that was not the case.

With a language barrier and financial woes, Zaki knew her future depended on pursuing higher education.

After attending Harrisburg Community College and earning a 4.0 GPA, Zaki applied to Wilkes and found out she had been granted the First Generation Scholarship.

“Blue and gold are definitely my colors,” she said, laughing.

Now enrolled in the pharmacy program, Zaki is on track to graduate in 2019.

The evening continued with the presentation of the President’s Medal to Clayton Karambelas, class of 1949 and his wife Theresa.

President Patrick Leahy explained that in determining who the recipients would be for this year, one couple’s name continued to come up.

“That couple of course is Theresa and Clayton Karambelas,” Leahy said.

During the evening, it was announced that the Karambelases would become major donors to the new media center for the Communication Studies Department, making the couple the most giving in Wilkes history.

“We’re trying to adapt to all of this excitement,” Clayton explained.

The couple had deep roots in NEPA as the Karambelases were local business owners and lived near the university campus.

“(It’s a) privilege to gift this university a building that’s been in our lives since we were newlyweds,” he added.

Humbled to receive the recognition, the couple passed the message of  encouragement to others to continue to support the university.

“(I hope this) lights a fire in you to pay it forward,” Theresa said.

In total, the Founders Gala has raised nearly $1 million for first generation students.