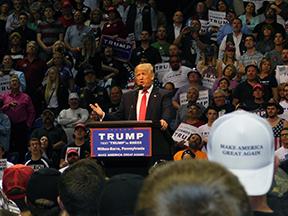 More than 10,000 individuals across Northeastern Pa. gathered at the Mohegan Sun Arena at Casey Plaza on April 25 for the Donald Trump rally, just one day before the Pa. primary.

Supporters from many groups were in attendance sporting signs with “Veterans for Trump” and “Silent Majority Stands with Trump”.

Many millennial and baby boomers were also present during the event showing an array of demographics.

The rally opened with various speakers including Congressmen Lou Barletta and Tom Marino as well as the invocation which was given by Betty Sutliff from the United Methodist Church.

“You use Mr. Trump as an instrument, an architect in your claim,” Sutliff said during the opening prayer.

While Trump was late to the event after traveling throughout the state, the crowd welcomed the presidential candidate as he entered the stage.

Trump opened with explaining that approximately 6,000 individuals were turned away from the event as the arena had filled.

His son, Eric Trump also was in attendance at the Wilkes-Barre rally.

Trump brought up issues close to those in the northeastern region such as coal mining and the natural gas industry as well as the demand to bring jobs back to the area.

He also touched upon his connection to the area as he and some of his children went to college in the keystone state.

Quickly, Trump brought up the newly formed Cruz-Kasich pact as the two try to diminish Trump’s chances of receiving the GOP nomination.

Trump called the system “rigged” as he continues to lead by millions of votes and recently was endorsed by the Border Patrol.

He employed common rhetoric to his campaign such as “Lyin’ Ted” even changing it up a bit to say, “Lyin’ Ted holds the Bible high then he lies,” garnering cheers and applause from the crowd.

Trump called for a unification of the Republican Party.

“We should be bringing everybody together, it’s time,” he said.

Trump also criticized the media calling out specific reporters for being unfair to candidates.

While much of the evening was spent on the corruption in Washington and the alliance formed by his opponents, Trump also explained the Pa. primary system and the importance of understanding how the system works.

“We have a rigged system, we have a corrupt system,” he said. “You have to vote for your delegates… the system is so complicated”

Trump later announced to the crowd that there were forms available to take into the polls which explain which delegates align with candidates.

Trump continued to discuss his opponents, bringing up that saying candidates are not qualified for the position isn’t a fair judgment because, “we’re all qualified.”

He also criticized President Obama for not having enough respect on the world’s stage and that if he becomes president that will change.

Trump used his business experience to explain that he had the experience and mindset to improve the current political climate as Obama has become a “tremendous divider.”

“This is the kind of thinking.. our country needs.”

As the rally came to an end, Trump continued to boost the morale of the crowd calling to them to be sure to vote in the primary as he hoped they would say, “(This is) the single greatest vote I ever cast (was) for Donald Trump.”

Trump closed the event by reminding voters of what he plans to do as president: take care of veterans, eliminate and replace ObamaCare, protect the second amendment, and improve the borders.”