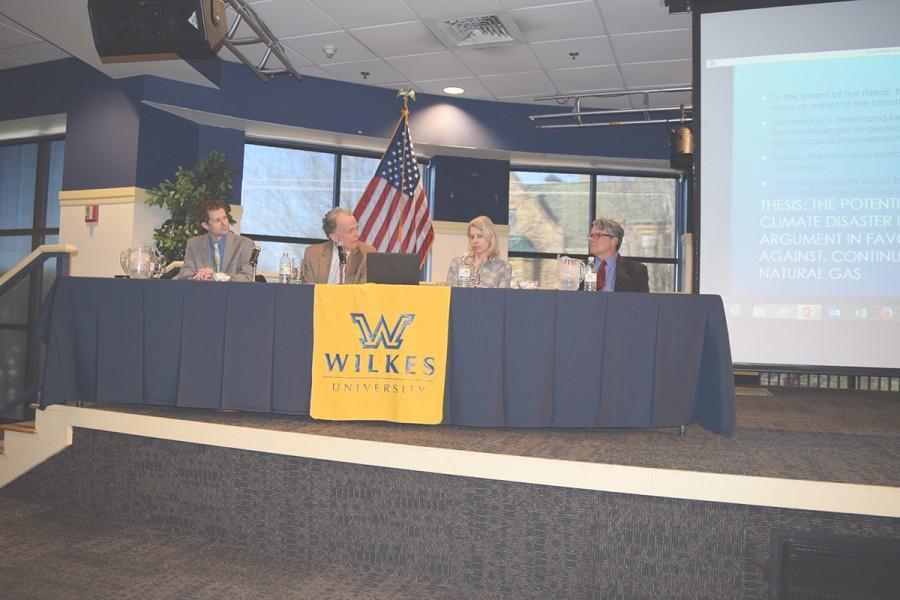 “Frack it or Leave it,” a panel discussion which took place on April 14 in the Henry Student Center Ballroom, spurred a discussion of opposing viewpoints as well as some anger in the audience.

The panel was kicked off by Philadelphia Inquirer journalist Andrew Maykuth, who presented what Baldino described as an unbiased viewpoint.

Maykuth discussed the great strides that have been made in the industry of fracking, pointing out that in his recent time visiting fracking sites he has noticed that efforts have “moved out of exploration and into production.” He described the boom of shale gas drilling by saying “immediate economic prosperity trumped environmental concerns.”

When discussing Pennsylvania’s fracking policy, Maykuth said that the legislature is constantly “playing catch-up,” citing the fact that regulations were not made regarding the dumping of waste water resulting from fracking until drinking water in certain regions was affected.

She explained that she and her environmentally sensitive colleagues initially saw the drilling of shale gas as a good thing, because it would burn cleaner than other fossil fuels such as coal and oil. However, the sentiment changed as soon as the other environmental impacts were explored.

According to Pralle, the federal government has been fairly “MIA” when it comes to fracking policy, leaving the jurisdiction to regulate in the hands of states and localities.

The fracking industry, according to Pralle, is exempt from certain laws that would regulate it such as the Safe Drinking Water Act, and the usually mandatory submission of a toxic release form that would list the toxins that might enter the environment from fracking.

“Congress isn’t doing much of anything these days, which supports the status quo,” Pralle said.

Pralle also explained that the uncertainty associated with the environmental effects of fracking has bred mistrust among citizens, as has the arguably sketchy nature of the industry’s evasion of regulations.

Michael Helbing, an attorney from Pennfuture presented another anti-fracking case, talking about specific environmental impacts of fracking, and spent a lot of time discussion methane emissions.

The methane emissions, Helbing explained, were significant contributors to the greenhouse effect and climate change. Helbing also discussion opposing advantages to fracking, which he said are “new and significant.”

Other environmental concerns addressed by Helbing were deforestation, chemicals, air quality, destruction of infrastructure, and more.

Overall, Piatt’s argument, which he described as the “common sense, layman’s” argument, was that leaving natural gases in the ground would be detrimental to the economy, and also that not using shale

gas would be more detrimental to the environment than using it. This is because the shale gas is a cleaner alternative to other fossil fuels.

Shale gas would present “some degree of improvement,” according to Piatt.

The panel was relatively uneventful and smooth until the questions section of the panel. Two audience members took the opportunity to present their own opinions on the issue of fracking, and both were overwhelmingly opposed. One audience member called angrily for the destruction of capitalism, while the other directed his loud, angry comment about the benefits of fracking not outweighing the detriments at Piatt.