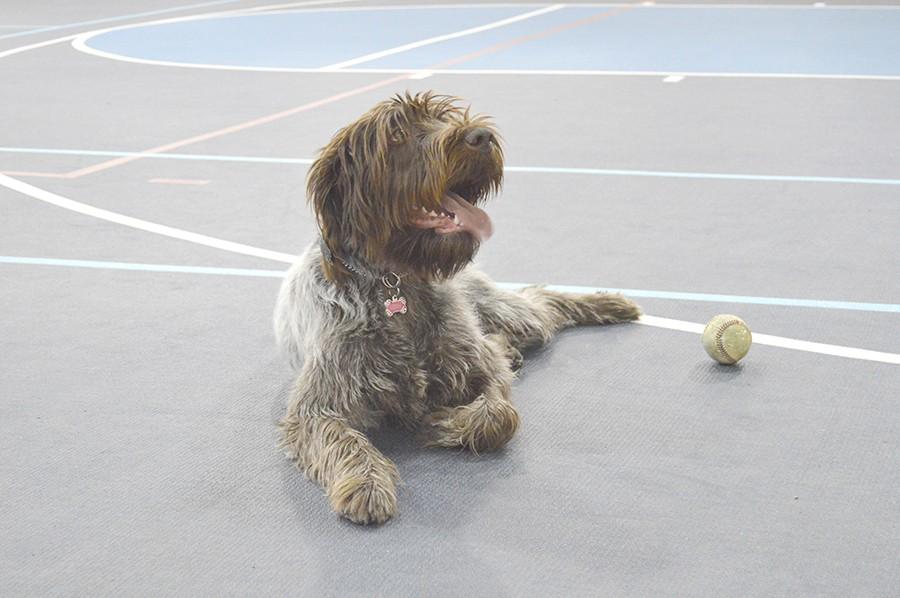 Libby enjoys playing fetch and a “goalie” type game where she trys to keep two balls away from Baum.

Cadet Libby, Wilkes University Air Force ROTC psychological service dog, has grown in size and students’ hearts since her arrival in the fall.

The canine cadet was brought to campus in September to train and serve as a psychological service dog, helping to provide emotional support for the campus community and veterans as they adjust to college life.  Eventually, Libby will also work off campus.

Libby, now 7 months old, has won over the hearts of the students, AFROTC Cadets and Cadre and Public Safety while continuing her socialization training.

Baum continues Libby’s training with an electronic clicker, which emits a sound on her collar via remote control when clicked. Baum uses positive reinforcement and utilizes the clicker when Libby performs well. The clicker, with a long distance range, would also help Libby know if she wandered too far.

Libby is currently working with senior psychology major Kavan Rai on her psychology capstone project. Libby works with Rai three times a week and enjoys being put to work.

“We are proud of her for contributing in her second semester.” Baum stated proudly.

Future plans include “getting through the growing pains” and continuing to integrate her into campus life by  getting her involved with as many activities as possible.

“Everyone loves her,” Baum shared on Libby’s growing social life. AFROTC Cadets and students alike have jumped at the opportunity to take her on walks, which only helps Libby become a better service dog.