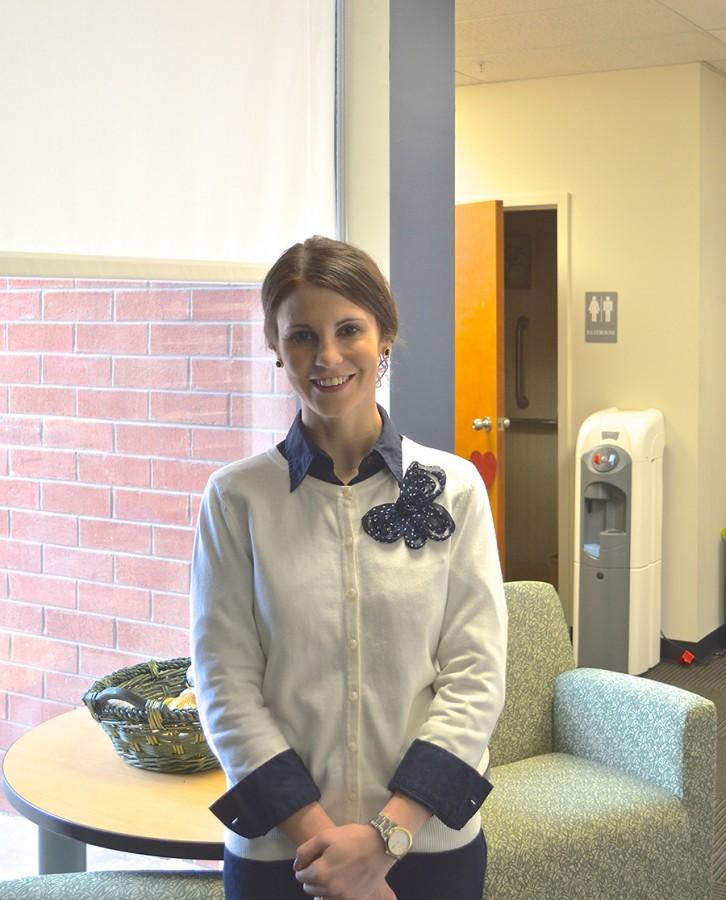 Phillips, above, explains that she hopes to take sexual assaults on campus down to zero through her position as Title IX coordinator.

The Clery report, otherwise known as the Annual Security and Fire Safety report, states that there were 10 sex offenses reported on campus in 2014, and one incident of dating violence.

Since Nov. 30, Samantha Phillips has been employed as a full time Title IX coordinator who can hopefully bring these numbers down to zero, while also combating other issues of equality regarding gender on campus.

Title IX is a bill that essentially prohibits sexual discrimination in federally funded education environments, including college campuses, K-12 and beauty schools. The job of a coordinator is to “ensure the school’s compliance with Title IX and to ensure an equitable community where students aren’t being hindered in their ability to participate in educational opportunities, classes and events based on their sex,” according to Phillips.

Phillips feels that her job is important and timely. “… Especially now, in this day and age, the department of education is really cracking down on Title IX,” she said. “That’s because there’s a lot of sexual misconduct going on in our country. It’s all over the news, so my job is important in maintaining a fair campus community.”

Phillips isn’t the only one who thinks her job is important; Wilkes has placed a lot of emphasis on the role of Title IX coordinator. “Wilkes is really trying to be at the forefront of this movement, and that is evident by the fact that they hired a full time Title IX coordinator,” Phillips explained. “A lot of larger schools are doing this, but at this point a lot of smaller universities are delegating that role to somebody already here on campus.”

In fact, Wilkes finds Phillips’s position so important that she reports directly through the president’s office. “… He recognized that this is a very important issue, and he wants to be directly contacted to be aware of the things that are going on on campus and to make sure that we’re giving the same opportunities to everyone on campus,” she explained.

So far, Wilkes has given Phillips a great experience. “I already love Wilkes University. It’s been a phenomenal welcoming, and everyone has been wonderfully helpful,” she said. “I really like the way everyone works together.”

Upon attending a Student Government meeting, she found nothing but a warm welcome and a general feeling of unity in regard to making Wilkes great. “That’s probably my favorite part, that everyone is really invested in making this a great opportunity for everyone that comes here.”

With a background in being an RA, swimmer and swimming coach and having a law degree in combination with an interest in Title IX and sexual misconduct issues, Phillips feels that her position is meant for her.

“I love being a part of a campus community. When I was thinking about what I wanted to do for the rest of my life, that was always something that I wanted to be a part of,” she said. “I just figured that this would be the perfect job for me to utilize my love of being on a college campus and also my background. I want to be able to ensure students are getting the great educational opportunities that I myself was fortunate enough to have.”

Phillips grew up in Schuylkill County. She attended West Chester University as a communications major, and Ohio Northern University for law school. In her free time, she likes shopping, spending time with friends and family and going to the movies.

The 2014 Annual Security and Fire Safety report can be found on the Wilkes website.