Terror attacks in Paris, failure of shared intelligence services; International community rallies with France while some instill fear in citizens 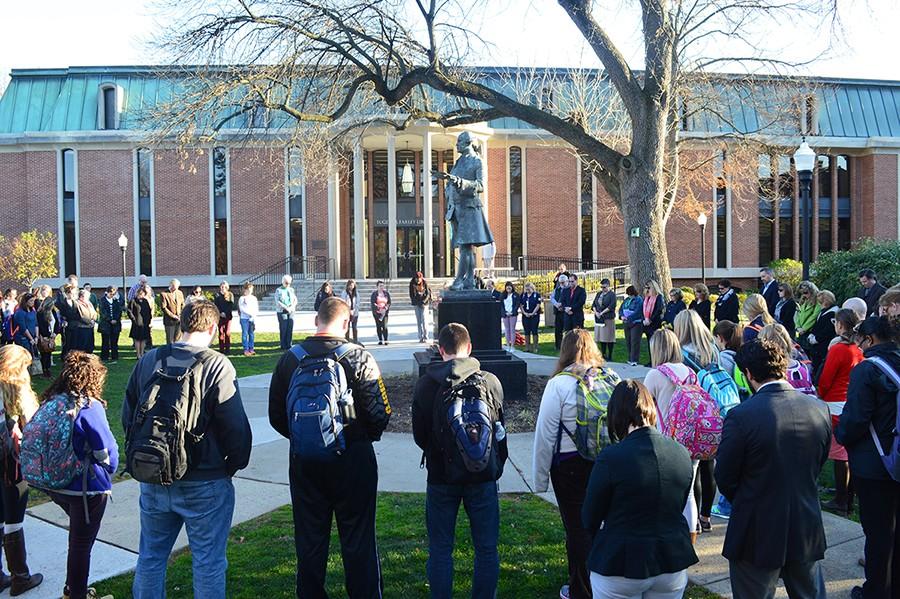 Members of the university gather for a moment of silence in honor of the victim's of the Paris attacks.

On Nov. 13, 129 individuals were killed after terrorist attacks at a concert hall, the Stade de France and numerous bars and restaurants conducted by the Islamic State in Syria and Iraq were completed on Friday evening.

The attacks happened less than a year since January’s attacks at the Charlie Hebdo office, which left 12 individuals dead.

Maierean explained that the Nov. 13 attacks were a result of  “a failure of French intelligence services, but also a failure to share intelligence and operational military information between Europe and the U.S.”

While the United States has the Patriot Act that consists of mass surveillance on citizens, France has also created its own version of the legislation.

In essence, the act can give the French government’s intelligence agency similar powers to the U.S. legislation which includes the “power to tap cell phones, read emails, and force Internet providers to scan customers’ Internet use for information upon request,” according to Digital Trends.

While French citizens have reacted with resilience and dignity amidst the events, Maierean explains that they are entitled to hold their government to a high standard.

“Once we give up our right to privacy, we maintain the legitimate and reasonable expectation that information obtained from surveillance is used to prevent terrorist attacks,” she said.

As the French President Francois Hollande continues to work on legislative alterations to protect the country, the international community has reached out to support the city of Paris.

“Terrorism can never win because the national community will also support the countries that have been attacked,” she said. “People refuse to give up their style of living.”

Relating the incident to American citizens, Maierean explained that U.S. citizens also should not live in fear.

The notion of fear is an aspect that American politicians have latched onto, dealing with the arrival of Syrian refugees into the United States as well as to other countries.

“Sadly, politicians will continue to disappoint us as they politicize this event to obtain electoral gains,” Maierean said, pointing to French politicians such as Marine Le Pen,  president of the Front National who has bred fear and xenophobia (hatred of foreigners) into citizens.

“She (Le Pen) and her party already have exploited the situation and created more fear and more intolerance,” Maierean said of the party, which has far right political motives including a rigid stance on immigration.

“If we continue to be intolerant we’re only going to make things worse,”  she said.

News reports flooded in on the status of the assailants, claiming that family members did not know that they were involved in the terror organizations.

Maierean explained that this is quite possible as “they don’t socialize the way we do… they only hear one brainwashing ideology,” adding “we judge them based on the family relations we have, but their circumstances might be very different”

Due to the cultural differences, many of the assumptions made by American politicians as well as mainstream media has escalated and propagated the intolerance Maierean spoke of.

“The media likes to simplify and oversimplify things,” Maierean said, calling the issue at hand is multilayered as it deals with terror groups and also generalizations made about religion.

“Normal Muslim believers condemn the death of any human being,”  Maierean said. This notion was further spread though the “Not in My Name” social media trend emerged as Muslims rallied in support of France.

This was not the only act of unity displayed despite the tragic events. “One of the most powerful videos was the French people leaving the stadium singing “La Marseillaise,” she said.

“We should focus on what unites us,” Maierean concluded. “There is immense common interest between France, United States, and other allies shaped by our shared values of democracy and liberty. We must continue to possess the belief that these values will ultimately prevail against the idea of ISIS”

On Nov. 16, Governor Tom Wolf released a statement that Pa. will still accept Syrian refugees: “To assist the settlement of families fleeing the humanitarian crisis in Syria, the Federal Government coordinates with local charitable organizations in Pennsylvania and other states. Pennsylvania will continue working with the Federal Government to ensure that all individuals have gone through the proper screening process.”

While the admittance of refugees into the country has sparked debate, Dr. Andreea Maierean, visiting assistant professor of political science, explained that stopping refugees from entering the country will not stop terrorism, but instead will instill more of the radical thoughts of terror groups like ISIS into its followers.

The attacks are typically put into motion by young men of the organizations.

These men are typically in their early to mid-20s, citizens of the European Union and according to Maierean,  they are “frustrated young men who are part of a minority and are not integrated.”

She added that they live in ghettos on the outskirts of major cities like Paris, they have a different native language and they practice a different religion.

Due to the feeling of alienation and the lack of education many of the men have, they are very vulnerable to the “brainwashing” of terrorist mentality.

Maierean explained that the leaders of the groups often tell them that “the western world does not want them” and the actions by politicians only supports that notion.

“If we continue to be intolerant we’re only going to make things worse,”  she said.

Calling the refugees a scapegoat to politicians, many place blame on the individuals for the cause of the terror attacks which is not the case, according to Maierean.

“There are forced connections with the refugees crisis because it’s easy to do so,” Maierean said.