‘Kirby cat’ in need of a forever home; adoption 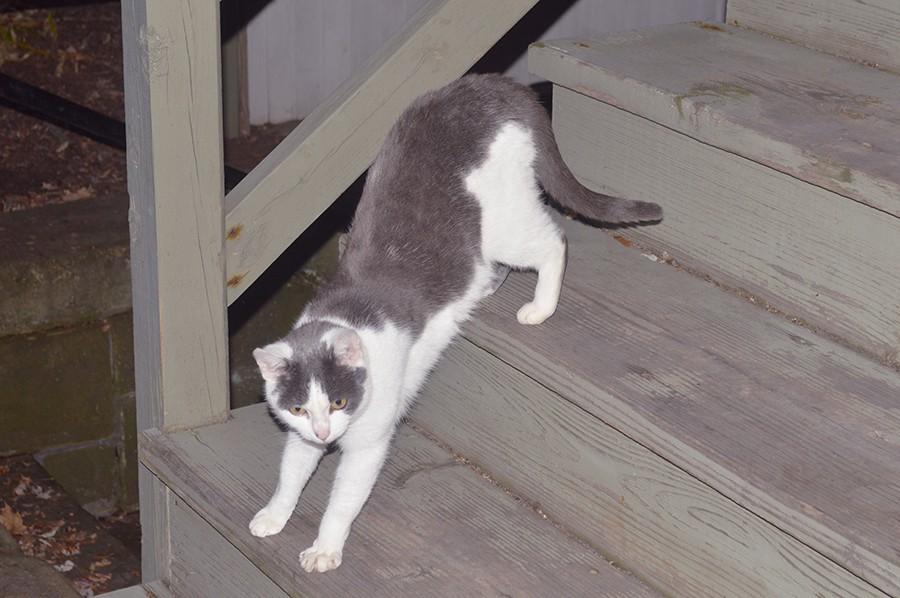 Concerned students wish to find the feline a forever home before the cold, winter months.

Housed beneath the steps of Wilkes University’s Kirby Hall resides the smallest  member of the campus community.

The little Colonel, known to some as Buttercup or Marshmallow and to others as Sally, is an adult grey and white cat who has become a loved asset to students who daily walk through campus.

Elizabeth Bracco, a P3 student explained that she and her friends enjoy spending time with the Kirby Cat.

“I am in the library almost every night and so I bring her a bowl of cat food on my way to the library,” she said. “My friends and I play with her during study breaks and on our walk home.”

The cat is very friendly, though shy at first, according to P2 student, Jimmy Steigerwalt.

“She was very shy the first time I met her and wouldn’t let me pet her,” Steigerwalt explained. “Later that night, I walked over to her little cat house under Kirby while she was sleeping. She woke up when she saw me, so I put my hand out and she started purring and let me pet her. Ever since that moment, she has been the friendliest cat I’ve ever met.”

The students believe that the feline once had a home but has since been abandoned.

“One student told me that she was someone that graduated last year’s pet, and just left her here after they left, which is extremely sad,” Bracco said.

“When I feed her, she does not stand over her food while she eats it; typically stray cats are very protective over any food that they may receive,” said Amanda Gerberich, a  P3 pharmacy student.  “I worry what will happen to her if she is outside for the winter.”

The cat appears to be neutered as it’s ear has been clipped, which according to Jen Reese, a volunteer at Blue Chip Farm, an animal refuge in Dallas, Pa, is what some organizations do to show that the cat has been spayed or neutered.

While students at Wilkes love seeing the four legged friend, many worry about her whereabouts during the winter months.

“I realize that finding someone willing to take in a stray cat is a tall order, but I hope that a true cat enthusiast is able to take her in,” Steigerwalt said.

At present, members of the campus community have provided the Kirby cat with a shelter and bed along with cat food and milk along with companionship.

“A lot of other students play with her, which I think is great,” Bracco said. “There have been numerous people that will feed her or leave her milk.  She even has two beds under the staircase, which is so sweet.”

Steigerwalt agreed adding, “I feel that it shows the character of Wilkes students.”

Due to the change in season, these students would like to see the Kirby Cat find a permanent home.

Reese explained that at present, Blue Chip is caring for roughly 200 cats and not currently taking more in as they receive calls for stray cats each hour.  She added that even when cats are brought into the shelter, they don’t always adjust well to the other cats and with older cats, it’s much more difficult for them to find homes.

Reese felt that the best option for the cat would be to start an outreach on social media to see if someone within the campus community could care for her.

Students attested to the cats likability, hoping to find her a forever home.

“Although she can be shy around strangers at first, she is very friendly once you are able to pet her for the first time. Considering how clean and well-kept she is, I think she was a former house cat and could easily transition to being adopted as a house cat,” Steigerwalt said.

“She is super friendly, loves attention, and is need of a good home!  She is fixed, relatively very healthy, and very active,” Bracco added.