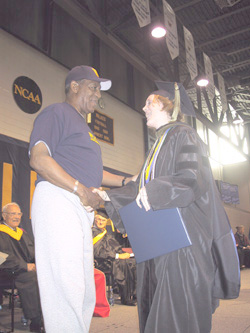 Above: Bill Cosby shakes hands with a graduate during the May 15, 2004 commencement activities.

On Sept. 12, 2003, members of the Wilkes University community voted to award Bill Cosby an honorary Doctor of Humane Letters degree.

Just more than 12 years later, the university’s Board of Trustees voted unanimously to rescind that degree.

Cosby, the well known actor and comedian who starred in 1980’s “The Cosby Show,” was chosen to receive the degree because of his educational and theatrical achievements, as well as commitment to social justice and civil rights issues.

“It has become clear by Mr. Cosby’s own admission in a 2006 legal deposition (Constand v.Cosby) that became public this summer, that he engaged in conduct that is contrary to the values of Wilkes University and the qualities for which he was honored,” said Wilkes University President Patrick Leahy in an email sent last week to the campus community. “This conduct is not in keeping with the principles of social justice and civil rights stated in the honorary degree citation.

“Mr. Cosby does not represent the ideals to which Wilkes aspires or the values most important to the university.”

“The board’s decision was made following careful consideration and was taken to uphold the interests, mission and values of Wilkes University,” Leahy’s statement continued.

Wilkes University had no additional comment on the Cosby or the revocation of the honorary degree.