Reflections on the Pope’s Philadelphia visit 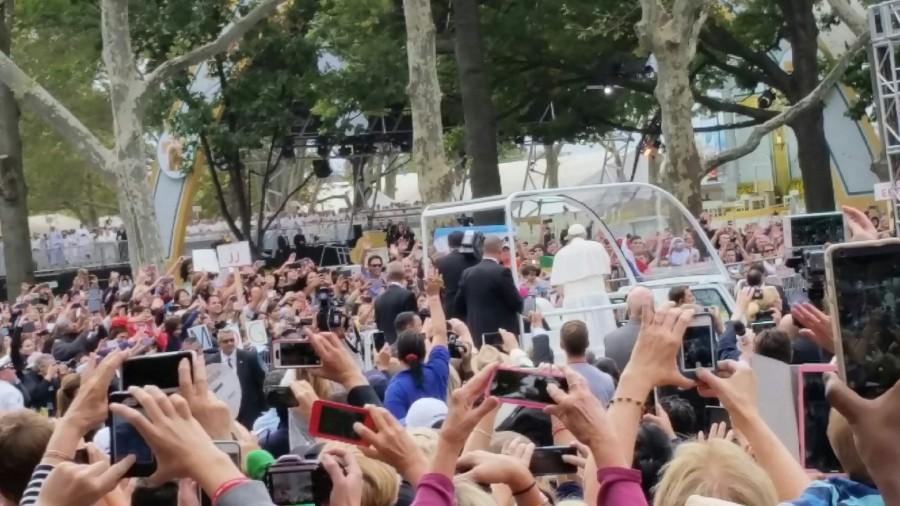 Wilkes student Bernard Socha, senior, and Dr. David Carey traveled to Philadelphia on Sept. 26 to see Pope Francis. Socha celebrated Mass at the Cathedral Basilica of Ss. Peter and Paul with approximately 50,000 people where he stood about 100 yd. from the alter. Francis addressed issuses such as immagration, climate change, poverty, religious freedom and brotherly love.

On Sept. 26, Philadelphia experienced closed roads, a crowd bubbling with excitement, a swarm of press and heightened security for the anticipated visit of Pope Francis.

Bernie Socha, a senior Wilkes student, and Dr. David Carey, chair of electrical engineering and physics department, were among the masses. Both noted the immense security present.

“There were 16 entry points and each had about 10 scanners. It took about an hour and a half to go less than a block in line through security,” said Socha, listing the various groups there to help, including local police, disaster/incident response, TSA, FBI, secret service, border patrol, state troopers and snipers.

While in Philadelphia, Francis celebrated Mass at the Cathedral Basilica of Ss. Peter and Paul; visited Independence Mall where he delivered a speech to approximately 50,000 people; and attended the Festival of Families, a major event that is part of the World Meeting of Families gathering, where he also gave an impromptu speech.

When asked how close they were able to get the Pope, the men had different responses that most likely embodied most people’s experience.

Socha was about 100 yards from the altar and noted that it was difficult to hear. Carey, on the other hand, opted to go watch things at a local pub, where there was a football game playing simultaneous to the mass.

Both men also noted that Francis was noticeably exhausted, and suggested he may have packed too much into one trip. They also agreed on how effective they believed his message to Congress would be in the respect of seeing change in policy.

“Our government will not be influenced by his message. They have become too polarized and cannot agree amongst themselves,” said Carey, who also noted that the Pope was much less conservative than those in the past.

Socha agreed on this point, stating Francis “was not pushing the hard issues that I believe the Church stands against, such as abortion and gay marriage, but rather seemingly weak issues including climate change.

“What he did mention will probably be taken into consideration, but will likely have limited effect on legislation here in the U.S.”

Carey and Socha went on to describe the most memorable moment of their experience. Carey described the “surreal feeling” of walking along the empty streets of Philadelphia and the abandoned Schuylkill Expressway. For Socha, it was the opportunity to have mass with the Pope and receive communion blessed by him.

For more information about Pope Francis’ time in Philadelphia, readers can visit http://www.popefrancisvisit.com/schedule-category/pope-francis-visit-philadelphia-schedule/.