After 35 years, Dean King will exit Wilkes with the Class of 2015 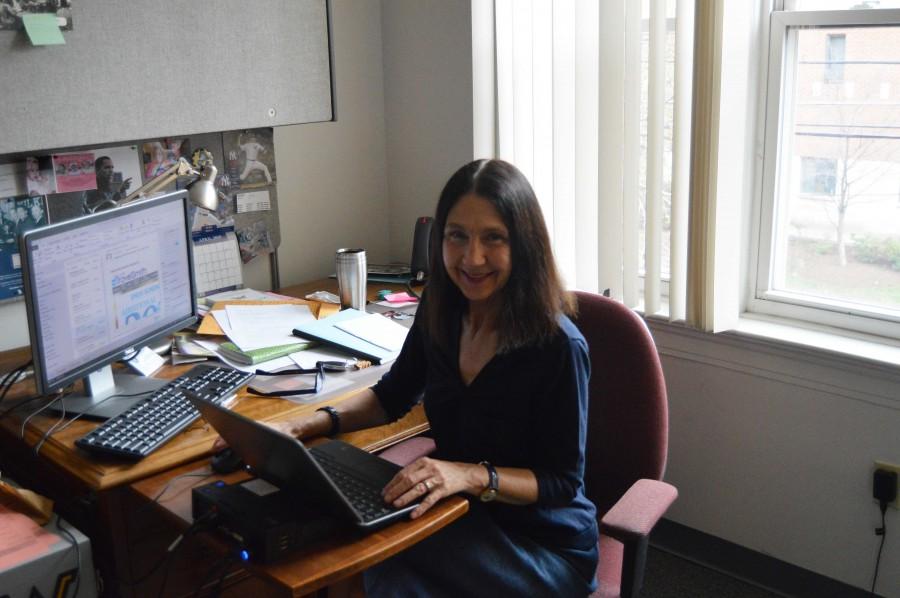 Associate Dean of Student Affairs, Barbara King, will retire from her position at Wilkes University after 35 years of service.

“In the last 43, I’ve been at Wilkes all except 4 years because I went to school here,” explained King.

King, who acted as associate Dean of Student affairs for the past 17 years, did not begin here.

King worked as a travel agent and then at Leslie Fay in shipment control prior to finishing her college degree. Her time at Leslie Fay is what made her decide to go back to school.

“I thought I was going to live on love with my love at the time and so I went to work full time and ended up staying out 4 years,” explained King. “I figured I better go back and finish, so I came back in 1978, and finished summer of 1980. I walked from my last class with Mr. Engel to my office in admissions.”

King worked for a total of nine years in admissions. For a year, she filled in for a faculty member in the co-op office and the worked in adult education in 1985 where she was the assistant director at first, then the director until 1990.

“When I started in admissions I said I’d stay two years, then I met my first husband and I wasn’t gone but I was happy to stay… you don’t work somewhere for 35 years if it’s terrible,” King said.

King explained that when, “Dr. Adams became dean of student affairs, he asked me to come,” and she followed.

As the associate dean, King has handled students unique challenges as well as act as the chief disciplinary officer, dealing with on and off campus issues.

King elaborated, saying that she has worked with students who have various issues that need assistance or “just a sounding board”.

Also throughout her time at Wilkes, King had served as the international student adviser for 26 years.

“I’ve certainly lived through a lot of students with big, big problems and a lot of those stay in my head but I certainly wouldn’t talk about them,” said King.

King reflected on her time at Wilkes saying that the idea of having a Wilkes work family is valid.

“To tell you the truth when you’ve been here as long as I have it really is your family in many ways… Wilkes has seen me through the best and worst times of my life, no doubt about that,” said King.

King explained that she is thankful for Wilkes for more than just her career.

“I had the good fortune thanks to Wilkes of meeting my late and current husband,” she said. “My late husband was the dean of the school of science and engineering, Umid Nejib.”

“It was probably the lowest point in my life and Wilkes was there for me all the way on that one and I will never forget that,” said King.

“My husband now is Dr. Michael Paige and I met him because Wilkes sent me to a seminar about international students many years ago when I was first starting out with international,” she said. “He was the lead presenter from the University of Minnesota and we got to be good friends and life turns out the way it turns out eventually.”

King explained that Wilkes has a way for caring for people, including it’s students.

While King admits the decision to retire has not been an easy one, she does have big plans ahead of her.

King and her husband plan on doing a lot of traveling, starting this summer.

“We’re very big travelers,” King explained. “We have friends all over the world and this gives us an opportunity to go and spend some time while we’re young enough to enjoy what we’re doing.”

King estimates that she has visited 50 countries.

“I never got a passport until I was 30 so all the traveling I did prior was without a passport,” King said.

This summer, they plan on visiting Russia and Finland.

King explained that her favorite place to visit thus far has been Istanbul where she attended bazaars, the large indoor market, and said the food was phenomenal.

While Istanbul takes the top of her list, King explained, “most of the countries I’ve been to I can find something wonderful about, they’re all so different.”

Although she enjoys travel, King said this will always be home.

While she looks forward to travel, King has other plans for retirement as well.

“I also will catch up on all the needle work and reading I haven’t been able to do for years and clean my house” she explains, laughing.

King shared some of her other interests, including rock music.

She explained that her dream concert would be the Rolling Stones.

“I also want to see Janis Joplin and George Harrison but I have to wait for the Big concert in the sky,” King said, laughing.

While King has many plans ahead of her, she reflected.

“I would like them (the students) to remember the opportunities Wilkes afforded them, whether they used them or not is two different things, and to any extent you can at any point in life try to support Wilkes whether its financially or as a mentor when you graduate because it really is a special place.”

King offered this advice to students as they prepare for graduation.

“Become independent, make decisions for them(your)selves, and work at what makes you happy not necessarily what makes you wealthy,” King said. “Remember you have to start at the bottom of the barrel and work your way up. You don’t become the vice president the day after you graduate.”

“I’ll certainly miss my interactions with students, whether its been good situations or bad situations I will really miss that and I will certainly miss the people I worked with,” said King. “I have life long friends I have made here and its kind of hard to believe Dr. Adams and I wont go to lunch every day and I wont be running across the street to see Coach Malatesta and everybody that’s been a close, close friend.”

King’s last day is May 16, graduation.