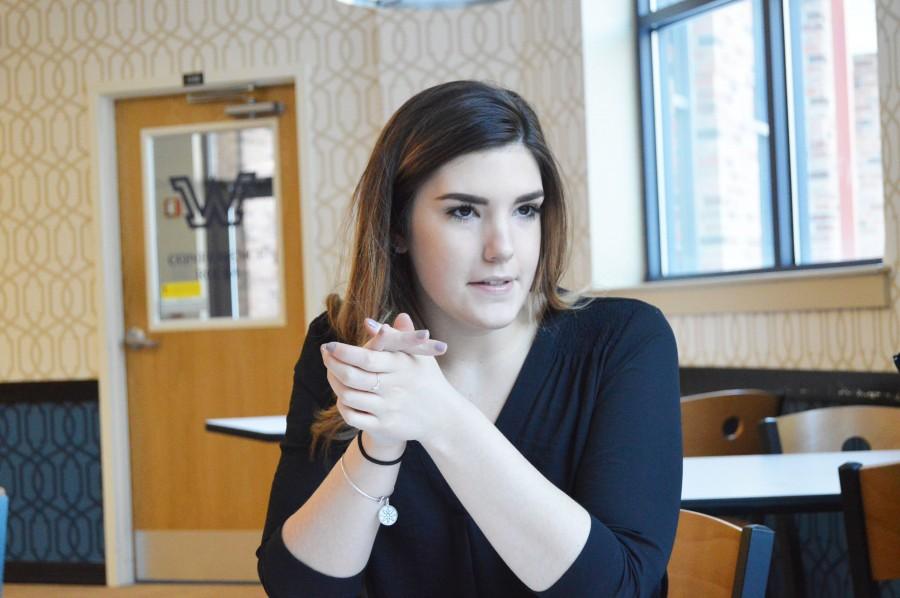 Beth Gilbert, 20,  is preparing for more than just exams this semester as she announced her candidacy as a democrat for Wilkes-Barre City Council District C seat in January.

The junior who is a member of  Pi Sigma, Political Science Honor Society; Alpha Sigma Pi, National Society of Leadership and Success and the International Studies Club and active volunteer with Valley Santa, Key Club, Building Bridges and Wilkes-Barre city clean up days, Gilbert has added yet another extracurricular to her list.

Gilbert, a political science and international studies double major, Wilkes-Barre native and G.A.R. graduate, had taken the initiative to run for the position after being inspired by previous experience with the Wilkes-Barre Junior City Council while in high school.

After winning an essay contest sponsored by the Pa. League of Cities and Municipalities, Gilbert was given the opportunity to be part of the Junior City Council and go to Pittsburgh where she met various mayors and individuals who sparked her interest in politics.

Although she is young compared to other council candidates, Gilbert has found age to be just a number.

“Some people have commented on it, “oh shes so young, how can she run a city” but my age never entered my mind,” Gilbert said.

Gilbert explained that the biggest difficulty she has faced is getting her name out in the public.

“I’m trying to utilize social media. As far as I know, I’m the first council person to do that,” Gilbert explained.

Gilbert hopes to get students involved and interested in politics as she sees them as part of the revitalization of the Wilkes-Barre area.

Part of her plans if elected include encouraging Wilkes University and Kings College students to stay in the area upon graduation.

“We want educated individuals to stay in the area,” Gilbert said.

So far, the campus community has been very receptive of Gilbert’s plans.

“I’ve always been more mature for my age,” Gilbert said. “I’ve always done things where people said, “you really want to do that when your only 16 or 18?” But I’ve had a really positive response from the campus community and a lot of students who are backing me.”

If elected for the seat, Gilbert would be responsible for representing District C which is composed of the Heights and Mayflower areas as well as pass ordinances and take calls from residence.

Gilbert explained that her specific goals if elected include bringing the youth aspect into local politics by bringing back the Wilkes-Barre Junior City Council which has since been removed, as well as rejuvenate the community life.

“I want to focus on neighborhoods as there is a lot of focus on the downtown…I feel a lot of residences feel neglected,” Gilbert explained.

Gilbert, who exudes a strong sense of determination explained that, “the best way to get something done is to do it yourself..I want to actually do something.”

Currently, Gilbert has planned a campaign fundraiser for March 3, at Genetti’s in Wilkes-Barre with tickets at $40 per person.

Gilbert has more plans on the horizon once the primary draws near such as hosting a Town Hall meeting so she can hear directly from residence.

“We’re here to represent the constituents and I feel that is often forgotten,” Gilbert said.

Gilbert hopes that her enthusiasm encourages individuals her age to take an active role in government as well.

“Everything that is going on now is our responsibility and we need to ensure that the direction it heads in is a positive one,” Gilbert said.

Gilbert plans on using her background in political science to her advantage as well to help Wilkes-Barre residence understand what she is trying to do.

“I think when you get elected sometimes people think you’re a superhero and you can solve anything but it doesn’t work that way,” Gilbert said.

Along with her plans, Gilbert also wants her constituents to know that she is ready to hear their concerns as well.

“Any time they have a concern, I will always be accessible and get back to them in one way or another.”

Gilbert is currently running against James Burden, 58, as the District C seat opened after councilwoman Maureen Lavelle decided  not to seek reelection for a second term, according to officials.