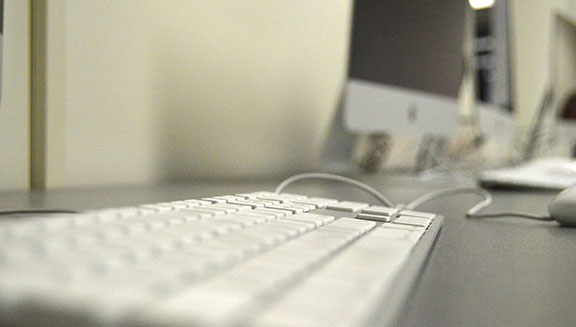 The past six months have been filled with changes within Wilkes University’s IT department.

The department, which had been outsourced to another company for approximately 10 years, was brought back in house this past July, and according to Dean John Stachacz of the library and IT, there were many issues needing resolution.

To combat these damages, the department hired 13 new employees including John Carlin, Director of Network/Tech Infrast who is directly working on improving the wireless network.

Due to the gaps in the old system, the first issue to be handled was improving security.

To do so, a password to access the guest wireless network was added a year ago. The department then encouraged students and faculty to use the regular Wilkes network connection and the guest network was limited in access.

“It wasn’t reactive it was proactive in protecting ourselves from potential problems,” said Stachacz.

Carlin explained that the issue with the system also had to do with the amount of access points, which determine how many devices can efficiently connect to the network.

“With the wireless on campus… there is a lot of areas that had weak coverage or inconsistent coverage,” said Carlin.

One such example includes the wifi connections in Towers which has limited access points. Due to limited resources, Towers has yet to be updated but it is on the list.

Other residence halls have been upgraded however such as Roth, Schiowitz, Sturdevant, Pierce, and Evans Halls.

Carlin explained that they had to come up with a plan to continue working on the dorms.

“We didn’t have enough time, it’s a lot of pulling cable in dorm rooms to hang access points.”

As the department continues to work on these updates, they must work within the resources available within their current budget.

Stachacz explained that they use “out of the box thinking to enhance our capabilities on this campus.”

“Students are coming in with more devices and needs for wireless than they were 5 years ago,” said Stachacz.

To determine which buildings take priority, they explained that as new buldings emerge on campus, they become first to be upgraded with the residence halls. From that point, the rest of campus is a case by case basis.

Carlin explained, “we know it’s an issue, it’s on the list”. Depending on finances, if they have extra money, they upgrade as best as they can.

“It’s not a complete solution but it improves the experience,” said Carlin.

The older buildings on campus pose their own issues as there are limitations on what types of renovations can be done as the buildings are intended to keep their antiqued appearance.

For now, the upgrades will continue gradually as the department seeks out grants and external resources.

Stachacz seems confident that within the next few years, these upgrades will be complete as the department itself continues to improve.

“We know we’re not perfect and have a long way to go but we’re on the right track.”