Fighting ALS: How one professor’s “Brave” fight is inspiring a whole campus 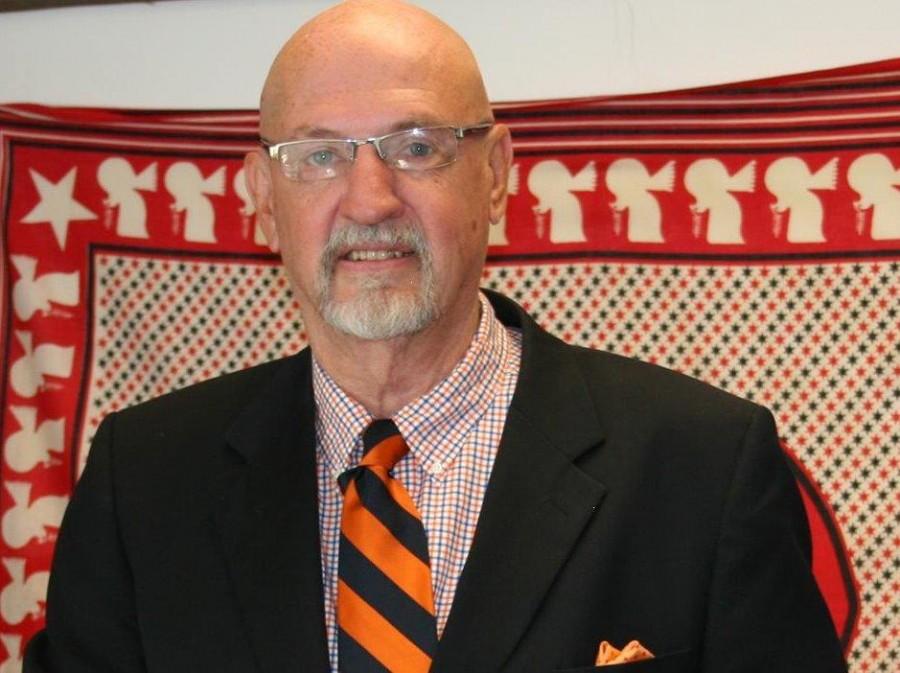 Dr. Jim Merryman has been all across the world, visiting Africa, Latin America, Asia, and beyond. That all changed with a simple three letter diagnosis 6 months ago.

Merryman has been teaching as an Anthropology professor at Wilkes for the past 26 years. Although Wilkes does not offer a major in Anthropology, they do offer a concentration that Merryman primarily teaches in.

He has also spent 13 years in East Africa working in rural economic development.

On March 3, 2014, all the world travelling abruptly came to a halt after Merryman was diagnosed with Amyotrophic lateral sclerosis, or ALS, also known as Lou Gehrig’s disease.

For Merryman, he has the bulbar type of ALS which attacks the throat first and the ability to speak, eat, drink and breathe.

He may not be able to speak above a “gravelly whisper” but that is not stopping him from living his life, or even teaching. He is just simply adapting.

“So far I’ve been lucky in that I have my mobility including my hands,” Merryman wrote in an email. “As long as I can type, I can communicate.”

Even just this past week, Merryman underwent two surgeries related to his ALS, one to insert a feeding tube to assist him with eating and getting the nutrition he needs. The other is a diaphragm pacer that keeps emulating the muscles of the diaphragm to prolong his normal breathing.

Eventually, Merryman will lose his ability to breathe on his own and will need a tracheotomy to assist his breathing.

To adapt to his loss of verbal communication, Merryman now carries a magic slate with him to communicate with people that may not understand him.

Merryman is still able to teach this semester. He has a full semester of online courses allowing him to interact with students, but in a different way.

“As a faculty member it’s hard to give up live lectures and discussions with my students. I have always enjoyed jokes and puns and nuances of meaning in verbal exchange. That’s gone.”

ALS is a disease that does not have a definitive test for diagnosis, so it can be a difficult time for those trying to pinpoint what exactly is wrong.

For Merryman, it started as a raspy voice and progressively got worse.

He was finally diagnosed after six months of misdiagnoses.

“It was a great relief to finally put a name on my disease and to know what I was dealing with.” Merryman said.

For his wife, Nancy, and daughter, Juliann, it was a different feeling than relief.

“It was very difficult to get a diagnosis,” Nancy said, “A lot of frustration and dead ends.”

She said there was a great deal of frustration between October and his diagnosis in the spring.

She also said, given his symptoms, ALS was one of the things she feared for the worst as his diagnosis. After, though, she said she realized there are much worse things that could have happened to her husband.

“When that was what the diagnosis was, it was like ‘Okay, we know what is happening,’” Nancy said, “We now know what the devil is.”

For both Merryman and his wife, the hardest thing to deal with is the progressive nature of ALS.

“I think the hardest thing is yet to come— the probable, inevitable total body paralysis,” Merryman said. “However, the direction and rate of decline with ALS is unknown.”

Most ALS patient’s life expectancy after diagnosis is about one to five years. Now, Merryman has almost made it to through his first year.

Merryman said he is a part of an ALS support group. Some of the individuals in that group have had ALS for ten or more years.

Merryman’s daughter Juliann, who is currently a graduate student at Syracuse University, said the doctors told her and her family not to look at life expectancy in numbers.

“My dad’s doctor and his team kept saying, ‘Do not think about it in a timeline’” she said. “It was important to just take it a day at a time and be grateful for all the time we have together.”

Merryman and his wife are not looking at the years that other individuals have had ALS, but rather are focused on his current condition.

“You just sort of have to prepare for the short term and hope for the long term,” Nancy said.

Thankfully, Merryman said he still has complete control of his mobility.

He can drive, swim, and work out. Jim says he hits the gym five days a week and is just adapting to his changing conditions.

“Instead of 25 lbs. curls, I’m doing 15 lbs.,” Merryman said, “I can still swim but can’t do free-style or breast stroke because water comes right into my lungs.”

In fact, Merryman was quite the dancer at the Wilkes University’s President’s Gala last June.

“Women were asking me to jitterbug,” he said, “That was very fulfilling.”

Merryman and his family embraced the challenge whole heartedly. He and his wife have completed a total of five challenges between the two of them.

“It’s amazing to me that the ice bucket phenomenon has coincided, more or less, with the diagnosis of my illness.”

He says the added attention to the disease is a welcome surprise because ALS is “not featured high on the national radar screen.”

The ALS Ice Bucket Challenge has brought a lot of attention to ALS. Celebrities, politicians, and world leaders have all completed the challenge, raising awareness and over $100 million dollars to the ALS Association.

Merryman said the almost instant nature of social media has allowed this challenge to spread so quickly.

“Among the various forms of raising awareness, the ice bucket challenge is both novel and unique. It doesn’t require a track or any special equipment. The task can be organized and completed in a matter of minutes.”

Merryman said he has received a lot of videos from friends and family all over the country.

He has even grabbed the attention from the places where he and his wife work. Keystone College, where his wife Nancy is a professor, was the first to accept the challenge on behalf of their friend and colleague.

One of her colleagues asked if it would be okay if they did it in his honor.

Leahy and numerous other faculty and staff members, including Merryman, gathered on the steps of the Farley Library to accept the challenge that was put forth to them by their fellow collegiate counterparts.

Leahy says Jim was nothing but supportive of the idea and was glad to be a part of the Wilkes University ice bucket challenge.

“Jim has faced this [ALS] with bravery,” Leahy said.

Leahy said he is very moved by the way Merryman is handling his recent diagnosis.

“It is incredible, he would deal with this disease so fearlessly and so directly, it is just incredible,” Leahy said, “He is handling this with such grace.”

Leahy offered these words of advice to those who may have a negative view of the challenge.

“I don’t have a lot of patience for the critics of the challenge to be honest with you,” he said.

Leahy said Merryman has become more to him than just a colleague at Wilkes.

“He has become a dear friend of mine,” Leahy said, “He is teaching me a lot about life and by the way in which he is handling this.”

For Dr. Sid Halsor, professor of Environmental Engineering and Earth Sciences, he and Merryman have been friends since the two met at social events for Wilkes University.

Although the two work together at the same university. Halsor says their friendship has evolved off campus.

For such a dear friend, Halsor had mixed emotions about his friend being diagnosed with ALS.

“I was crushed,” Halsor said, “It was quite devastating.”

Halsor shared in the sentiments said by Leahy regarding Merryman and his diagnosis.

“I have been really surprised at his approach to his diagnosis,” Halsor said, “He has maintained his sense of humor. He made it clear he wanted to go on living his life the way he always had.”

Halsor said he is very impressed with Merryman’s demeanor.

“He [Merryman] does not even have a tinge of a fatalistic attitude,” Halsor said, “He’s always just been very engaging.”

For now, Merryman is focused on the important things in life.

“Instead of sitting idly in my barcolounger waiting for a knock at the door from the grim reaper, I am turned on at near fever pitch at attempting to complete a growing list of activities that are limited only by amount of time remaining and my dwindling physical ability to achieve them. Life is rich and full of opportunities.”