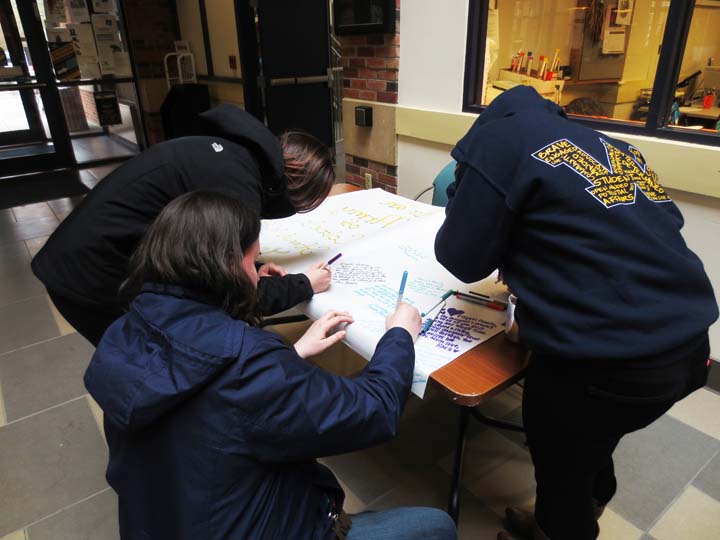 Many members of the Wilkes community try and make small tokens to make Flipinski feel better and remind her to stay strong in this difficult time.

An accident on a busy street that left a student in critical condition has caused the Wilkes community to come together in support for her, as well as question the safety of that street.

According to Wilkes-Barre police, around 5:30p.m. on Sunday, April 6 sophomore communication studies major Rebecca Filipski sustained severe injuries when she was struck by a car in the right lane on the Market Street bridge.

Filipski was crossing Market Street near Kirby Park when she was hit and transported to Geisinger Wyoming Valley Medical Center, where she remains in critical condition. The investigation into the accident is still ongoing.

In week following the accident, the campus community has shown a strong amount of support for Filipski. Many students wrote messages of support on the wall of her Facebook page last Monday and have raised money to buy her get well-gifts. Some have even gotten together to create a get well video for her. Members of Student Government, along with Filipski’s roommates on campus, created two large cards that members of the campus community signed on Monday.

In an email to the campus community on Monday, Student Affairs stated that Filipski’s family has been appreciative of the outpouring of support by the university community and asked that “you keep her in your thoughts and prayers during this challenging time.”

Those who know Filipski describe her as a fun person to be around. Senior communications major Jenn Villa got to know her through their involvement with “Wilkes Now.” “Rebecca has always been one of the most energetic, bubbly, just naturally always very happy people I’ve met,” Villa said. “Anytime you are with her, you can’t help but smile.”

“I’m trying to think what we can get her to keep her mind occupied if her body isn’t able to run around because she doesn’t sit still,” Elmes-Crahall said. “That’s our challenge as friends and faculty is try to find something to keep her mind and hands occupied because somehow seeing Rebecca in bed for longer than a couple of hours seems a little unlikely.”

Filipski has been active on campus through her involvement with WCLH and the University Chorus. Director of Choral Activities Steven Thomas described her as a wonderful member of the chorus whose presence is very much missed Junior communications major Kayla Bucci and freshman communications major Zach Benedict said they both miss her in their classes.

“I always sit next to her in sociology and it was weird not having anybody to talk to,” Benedict said. “It brought a tear to my eye because I looked over and saw an empty seat and know exactly where she was.”

Bucci describes Filipski as someone who is engaged and whom classes aren’t the same without.

“I just hope that she gets better and hopefully I’ll see her bright, shining face in science because I miss her,” Bucci said.

Villa added that she feels there should be a crossway added on Market Street in order to prevent further accidents.

“It’s not shocking to me that this occurred on such a busy street,” Villa said.

Steven Thomas, who drives down the street as part of his daily commute to campus, said the accident has made him more vigilant as a driver.

“Every time I drive by there now I’m keeping my eyes open more than normal,” Thomas said.

He added that the accident is a wake-up call to the risks associated with trying to cross such busy streets.

Editor’s Note: Because Filipski is a communications major, she has had an involvement with The Beacon in the past and is an acquaintance to many on staff.