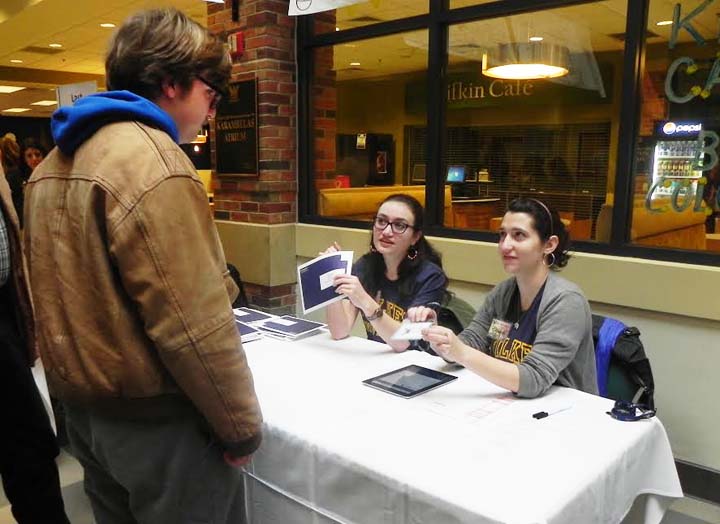 Every year accepted students and families are invited to a ‘VIP Day’ on the Wilkes campus. Families are welcome to go on campus tours and talk with current students about any questions they might have about studying at Wilkes in the fall.

Campus was abuzz on March 22 as future Colonels marched through the Henry Student Center to attend VIP Day.

VIP Day is held yearly for high school seniors who have been accepted to Wilkes University.

Check-in began at 8:30 a.m. where students and their families were welcomed by Wilkes student ambassadors who acted as greeters, tour guides and helping hands throughout the day.

After check-in, refreshments were offered in the Martz Gymnasium where the welcome address was given.

President Patrick Leahy had tweeted out the day before saying that, “We’ll have over 1,000 people on campus tomorrow @WilkesU for VIP Day. A record turnout! #WilkesU”

Junior criminology major Shanice Woods, who was an Ambassador for the event, discussed why she felt VIP was beneficial to those in attendance.

“It’s a great way to confirm their decision and make sure they’ve made the right choice.”

Sophomore pre-phramacy major Caitlyn Tompkins agreed, adding the factor that as current students, they were once in the incoming freshmen shoes, and now “you get to share your experiences.”

At VIP Day, the students and families were able to select different sessions to attend, such as a student panel and a financial aid question and answer.

There were also presentations given such as “Behind TV Special Effects,” “Chemical Contaminants in Food: Is Anything Safe to Eat Anymore?,”“Engineering and Physics: Undergraduate Research at Wilkes” and “Rip Van Winkle and the Origin of Stories” amongst others.

Many individuals found this to be the biggest difference between VIP Day and a normal campus visit.

Along with these presentations, students had the option to take tours of campus and of residence halls in Weiss, Roth, Evans, Towers and a freshman favorite, Waller.

VIP Day ended in the early afternoon, leaving the current army of colonels exhausted but also allowed them to reminisce about their decision to attend Wilkes.

“In high school, VIP day was the day I really fell in love with Wilkes. It’s awesome being on the other side of it as an ambassador. I’m exhausted by the time it’s over, but I’m not lying when I say it doesn’t feel like work. It feels more like fun!” said freshman English major, Tara Giarratano.