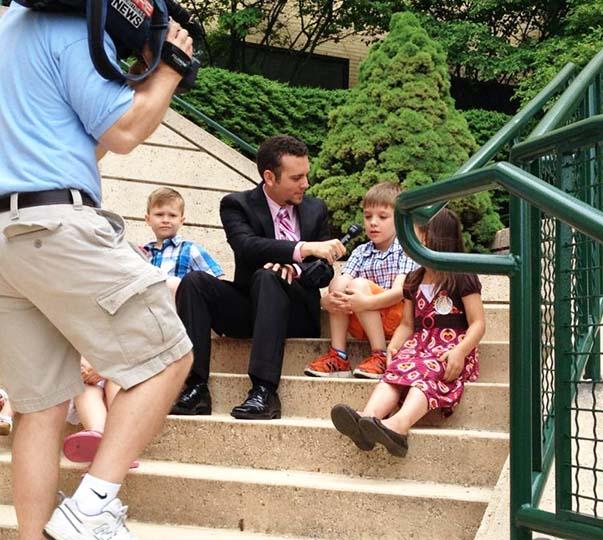 Dominick Costantino continues to be involved with the organization by participating in events like the above. The current project he is tackling with Zebra Communications is a fundraiser on March 23, at Rodano’s in Public Square from 1-4 p.m.

Some charities touch lives in such a way that those individuals continue to be involved even after their needs have been satisfied,  as was the case for Wilkes senior Communications Studies major,  Dominick Costantino.

After noticing Costantino was limping as he ran down the soccer field, his parents took him to the doctor where he was later sent to Geisinger in Danville. From there, he was told he needed extensive leg surgery to correct the issue.

Costantino has been involved with the chairty speaking at different events and fundraisers explaining his experience with the organization; hosting the Children’s Miracle Network telethon on WYOU which occurs every year during the first weekend in June; and hosting a segment of the radioathon in Selensgrove, Pa.

“The past 9 years have been wonderful with Children’s Miracle Network. I met so many wonderful people who were also touched by the charity. I try to keep in contact with as many of them throughout the year as I can,” Costantino said.

As board co-chair of Zebra Communications, the student-run, public relations agency, Costantino suggested that they become involved.

“Zebra took Children’s Miracle Network on as a client last year after I recommended it.”

This year, Zebra’s fundraiser for the Children’s Miracle Network will take place from 1-4 p.m. Sunday, March 23, at Rodano’s.

The event will be co-emceed by Costantino who is the account team co-manager, along with Monica Madeja from WBRE.

Costantino remarked that students interested in getting involved with the event should call 570-706-6951.

Admission is $15 serving pizza, wings, draft beer, soda, coffee and tea. Activities include a dessert competition, basket raffle, and live entertainment. Three miracle children and their families will be present as well as a representative from the Miss America Organization.