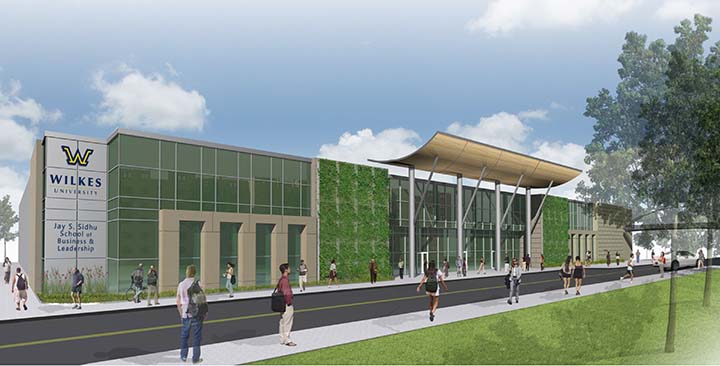 An artist rendering of UCOM after the planned renovations.

While students were busy enjoying time off during spring break, Wilkes announced a new phase of renovations that will expand the campus’s presence in downtown Wilkes-Barre.

On Wednesday, March 5, President Patrick Leahy announced formal renovations to the University Center on Main Street and plans to purchase the former Bartikowsky Jewelers building next to the center.

In April, the university will start work on the $3 million renovation to the University Center on Main Street to house all facets of the Jay S. Sidhu School of Business and Leadership.

The new building is expected to be a state-of-the-art business school that will include a financial market trading room simulating a New York Stock Exchange trading floor complete with an electronic stock ticker. It will also include meeting rooms for students, space for student clubs, faculty offices and seven smart classrooms. The renovations are expected to be completed this August.

Students feel excited for the new additions to the business program. They feel it will help consolidate the program, which is currently located in several buildings across campus including Weckesser and Breiseth halls.

“Having all the classrooms and offices in the same building will make it easier to communicate with administration and other students,” sophomore entrepreneurship major Katie Lawlor said. “The technology advancements will make learning more enjoyable and hopefully productive.”

“I am really excited to start my sophomore year in the new building,” he said. “The buildings set-up will allow for more team and group based work with the use of the new team rooms. This will assist in Freshman IME class work and upper class men work.”

Colonel Gambini’s Café and the recreation center will remain in their present locations in the UCOM building.

Purchased for $1.2 million, the vacated Bartikowsky jewelry store will be initially renovated for administrative offices, including the student services center, including the registrar, financial aid, finance and accounting offices and human resources. Other administrative personnel that currently work in UCOM will move their offices to other locations on campus. The building’s other uses will be considered as part of the university’s master plan.

Northeastern Eye Institute will remain at its current location near the former jewelry building for the next several months but will eventually relocate. The 80-car parking lot will be re-landscaped and used by Wilkes and both buildings will receive extensive exterior work designed to match the grey stone facades of many buildings on campus.

Also part of the plans is the creation of a South Main Street Gateway, a new entrance gate to the center of campus from South Main street that would stretch through South Franklin street onto the quadrangle. It is expected to be completed in the next academic year.