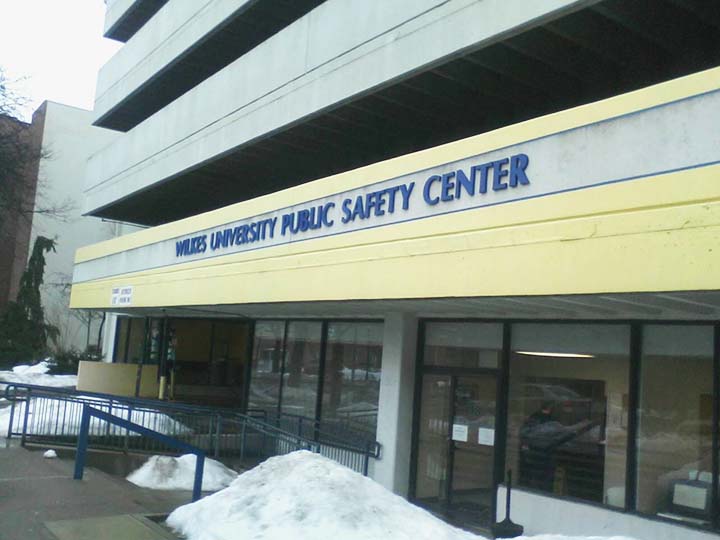 Murders in Wilkes-Barre totaled two in 2010, two in 2011 and five in 2012. However, the unofficial number of murders in 2013 surpassed all of those years combined.

Those statistics, coupled with a general rise in crime and attacks around the campus, have led Wilkes University Public Safety to take stronger measures to ensure a safer environment, such as increasing the number of officers, adding more vehicles, increasing training and making officers more visible on campus.

Now, Wilkes administrators are considering taking an even bolder step.

“We recognize that some students and faculty have some reservations about it, and my expectation is that, once the decision has been made, we’ll satisfy their concerns with adequate training and responsible conduct,” Prescott said.

The evaluation process for the issue began a year ago, when the university sat down with a nationally recognized consulting firm with expertise in both public safety in general and saftey on college campuses.

This firm, called Margolis Healy, urged Wilkes to think carefully about the expectations it has for its public safety department and how it feels as a campus, which would prompt a discussion. Essentially, Prescott said it is not a matter of right or wrong. Rather, he said it’s about what we feel is right for the campus.

The question became: “What do we want Public Safety officers to be able to do?”

A public safety survey was also done in an effort to gather input, in which legitimate concerns from students, faculty and staff were expressed.

Both Prescott and Vice President of Student Affairs Paul Adams agree that the arrival of the new Public Safety Director Christopher Jagoe, who is also an expert on university public safety and 25-year veteran of the University of Maryland Police Department, will be an important resource because he worked with an armed force. But, in the end, everyone will play a vital role.

“We want to make sure we have input from everyone,” Prescott said. “We don’t want to make a quick decision because it would then be institutional.”

He said it is expected to take about two months to reach a decision, but that decision should be deliberate and thoughtful.

Prescott said that currently the public safety officers at Wilkes fall under two levels of training. Five Act 120 officers have a police academy background and training, and the remaining Act 235 officers have some training in the use of lethal force.

Differences in training mean varying levels of ability to handle equipment, with titles of police and security officers being the difference between armed and unarmed staff.

Based on the proposal made by the consultants, Prescott said the idea is to gradually move toward a hybrid force.

Adams said he has faith in the integrity of those hiring officers, and in the officers themselves. He also agrees that it would instill more confidence in students. He points out that we live in a community where access is practically always granted, and that actually having to step in and use arms is the last thing anyone wants to do. Still, as Adams also points out, caution is key.

“If we’re expecting public safety to respond to dangerous circumstances, we need to give them the tools to react properly and appropriately,” Adams said.

He said we cannot necessarily expect an officer to jump in unarmed without knowing the details of the situation.

Students also shared their feelings about the possibility of arming officers.

“I think that’d be a great benefit for our security system around here,” Dominic Rinaldi said. “I definitely think I’ll feel a lot safer if our public safety officers are carrying weapons.”

“I wouldn’t care to be honest, I’m more concerned about them knowing how to use the gun or weapon,” Monique Woodward said.

The issue of implementing a gun policy is a concern for other area colleges and universities as well. With a traditional student body of about 7,000 students and five off-campus sites, Luzerne County Community College, the largest college in the area, took a proposal to arm officers and turned it into action.

The decision in fall 2013 came after research, approaching different constituencies such as the Board of Trustees, upper-level managers and faculty and support unions, and of course consideration of the school’s policy on the issue of weapons.

Director of Safety and Security Bill Barrett said the incident at Virginia Tech in 2007, which was deemed the deadliest shooting rampage in American history after a student open fired on classmates, was a major motivating factor behind the decision. The decision took time to be put in place, as the goal was to determine the best approach for the college and answer any questions.

“We wanted to methodically make the conversion ensuring that everyone was comfortable and fully understood what our objectives were, keeping everyone informed as we progressed in the conversion,” he said.

He said when the idea was presented more than a year ago, not a single person opposed it.

“Everyone thought it was the right move,” Barrett said. “When you have something that everyone agreed on, that doesn’t happen too often.”

In fact, the announcement received a round of applause, particularly from the faculty. And although it was a bit of an awakening for students to see officers armed, they too had favorable comments about the situation.

“The campus community had enough confidence in us to realize that this is the right move,” Barrett said.

But even from that point, time was still going to be a contributing factor.

“Once we were at a total green light, we were still looking at a year to get it in place.”

LCC took a closer look at its situation and decided that it wanted to do a little more than what it was doing, and not worry about having regrets later or about something that could or should have been done. It reflected on the rationale that if there were to be an incident on campus, such as a shooting, would they be asking themselves the following day if they could have done something more? It was exactly that thought that the college wanted to avoid addressing after the fact.

Barrett said the college encountered an incident about three years ago, where a student began acting irrationally, waving around a scalpel. This led to security restraining the student, upon which they discovered a loaded gun in his backpack.

Barrett, who has 28 years of police experience, said many of the officers who are employed part-time at LCC have former law enforcement experience. Considering the military and police backgrounds of many of the officers, a familiarity with weapons already exists. There’s no forcing involved, which he sees as a point of caution for other schools to keep in mind.

“We’re not trying to turn people into what they’re not,” he said.

Echoing the opinions of Adams and Prescott about properly equipping officers, Barrett said colleges “need to give them the resources they need; otherwise they are just another bystander or victim.”

He also points out that applications that do not meet the certification requirements will not be accepted. Perhaps proof of credibility lies in the changing job descriptions as well, which now include Act 235(f) or Act 120 certifications and three years of experience in the public safety field upon application.

To top it all off, there is even a training session coming, as Barrett said they are even going above what’s required by the state.

“It’s a little bit of an expense, but we want to make sure everyone has proper training,” he said.

Barrett said the policy at LCC has been working very well.

“We’re proud of what we’ve done,” he said. “It’s kind of like having insurance; you have it and hope you never have to use it. But if an incident were to happen, you’re happy you have it.”

But, with LCC’s policy came some conditions: The guns stay on campus, officers are responsible for maintaining them and no sharing is allowed.

However, not all schools have gun policies in place for their public safety departments. In fact, just down the road from Wilkes, King’s College is also in the process of coming to a conclusion as to what is best suited to its campus. That process is, again, highly dependent on feedback from different constituencies.

Director of Public Safety and Security John McAndrew said the plan was presented to both Student Government and the faculty council back in the fall, and based on the feedback that brought in, the proposal is now out there for a second time.

“This is an issue where the ramifications would involve the whole campus, so the idea is to get everyone’s input before anything is decided,” he said.

Andrew said the talk involves not only arming some guards, but also providing some arrest powers.

He said there is no hard and fast date by which a decision will be made, but that “the end goal is having a policy everyone is happy with.”

Whatever the direction of the situation at Wilkes, Prescott said there will be a substantial increase in resources and training necessary to ensure that the officers are well-trained and able to properly use equipment. The ideal goal is to act when we can, with what we have, and Prescott said officers will gain trust overtime.

“The reality is that we will earn the trust of everyone campus by officers doing their job and doing it well,” Prescott said.

As for what will come of the upgrade, Adams said there are still questions to be answered and feedback gathered, whether that means contracting out with the Wilkes-Barre Police Department, creating a new force of on campus or sticking with what the university has. Adams said Jagoe will help place the missing piece of the puzzle.