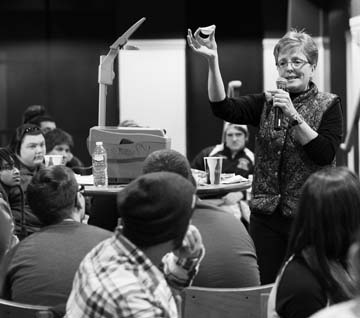 Students were invited to a free night of sex education held by the Bacchus Club on campus. This event made sex talk fun and informative by incorporating the game of Jeopardy with theopen manner of sex. Laughs and knowledge were to be had at this event last Tuesday.

Rhonda Lynch, Bacchus Club President, adviser Gail Holby  and members of the Bacchus Club organized the evening with a jeopardy style format allowing teams of four to test their knowledge on sexual topics such as “Anatomy and Protection,” “Birth Control,” “STDs” and “Condoms.”

The game’s host, Anne Holmes, warned students at the very beginning that this would be a straight forward evening  and that those “trying” to be offended by the content matter, probably would be.

The program opened with a short video entitled, “10 Ways a Condom Can’t Protect You … ” featuring situations like encountering a velociraptor or a wrecking ball but highlighting the protection condoms do offer against STDs.

The show continued asking teams questions pertaining to sexual encounters, sexually transmitted diseases, proper methods of protection all the while Holmes would include explanation to issues and even including anecdotes and puns.

“I thought it was very informative. There was a lot that was unknown. It definitely wasn’t your normal health class, that’s for sure,” Gabby Glinkski, freshman Communication Studies major said.

In between Jeopardy question sets, Holmes answered pre-submitted audience questions, some more profound than others.

Each member of the winning team left home with a prize but no one left empty handed. Students were encouraged to take condoms and information packets as per request of past Sexual Jeopardy attendees.

Sexual Jeopardy took place from 9 to 10 p.m. and is an annual event.