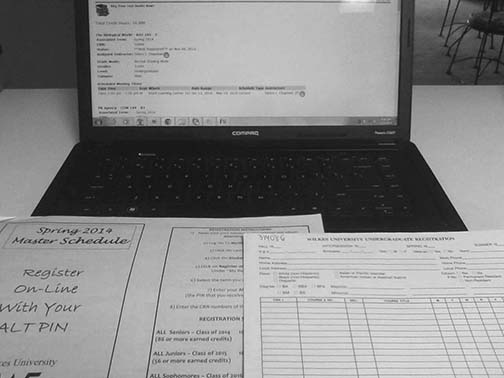 The Beacon/ Nicole Zukowski Most student problems with advisers stem from class scheduling.

A group of students at Wilkes University recently voiced frustration toward their respective advisers, calling them, “inattentive” and “unhelpful.”

“My adviser just sat there while I struggled with picking out classes,” said one sophomore nursing major. “She also never emailed me to meet up with me in the first place … She then proceeded to sign off on a list of classes that were not correct for my track, and now I am in the wrong class.”

Another student, a sophomore who was studying clinical lab sciences before switching majors, voiced similar complaints:

“My adviser never tried to schedule a time to meet with me to schedule classes for the semesters, or check up on me to see how I was doing,” she said. “If I was struggling, he did not give me advice to seek the help I need.”

This student in particular said that her adviser even went so far as to insult her:

“The one time I sought help from him; he blew me off and called me stupid.”

While these may be the opinions of just a few students, speculation of the school’s advisers’ abilities among unhappy groups of peers has been growing.

Dr. Michael Steele, chair of the Biology Department, was quick to defend his faculty from the complaints:

“I know his reputation for being honest and forthcoming,” Steele said of the adviser who allegedly insulted his advisee. “Not for a second do I expect that he is doing anything other than trying to prepare students for the difficulties that may await them.”

Steele also stressed the fact that scheduling meetings for registration is the responsibility of the student, not the adviser.

A sophomore pre-pharmacy student said that her problems lie not with her adviser’s attentiveness or professionalism, but rather with the advisor’s inability to help the student:

“My adviser is really nice and always keeps in touch. There’s just one problem, she is not a pharmacy adviser,” the student said.

Because the pre-pharmacy student is going to a career services adviser rather than someone in the science department, she said she has been having issues with picking the correct classes.

Steele voiced his understanding for this student’s predicament, stating high enrollment in the science departments as the issue:

“If they bring in too many pre-pharm students without a guaranteed seat, it’s not fair to the students. There are limited seats in the program.”

“Many of my faculties are advising 30 or 40 kids … there’s a limit on how many we can do,” Steele continued. “While bio and chemistry are perhaps best prepared to advise pre-pharm prospects … it’s a real trade off. Some are left to be advised by other individuals on campus.”

The pre-pharmacy student has since been seeing a biology professor for additional help.

Dr. Prahlad Murthy, associate dean for the College of Science & Engineering, echoed Steele’s opinion that the student should take initiative, and said any problems should be addressed to the adviser.

He also said that if problems arise, the student should remember that advisers are not acting maliciously.

“(Advisers) want the best for the students,” Murthy said. “We would like them to succeed; whatever it takes.”