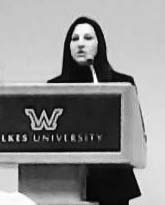 Dr. Hanada Taha gave insight to her own life experiences to explain why she feels education is the only way to truly empower a woman.

Hanada Taha, the acting dean of Bahrain Teachers’ College at the University of Bahrain, was invited to Wilkes University campus to give lectures on Jan. 28 pertaining to her studies in the Arabic language and a main lecture on women’s empowerment in the Middle East.

Taha’s first lecture pertained to international students learning new languages and her work within the field of the Arabic language.

Taha said languages are varied by categories based upon the amount of time needed to become fluent. Arabic is a Category 4 language, meaning it takes roughly four years of sustained instruction to learn.

Taha further explained that it is not enough to know a language academically, one also needs to know the “day-to-day” conversation. Reflecting about her own experiences in New Orleans, where she received her Ph.D. in curriculum and instruction, she recalled how the people in that region had their own spin on English phrases.

Taha also discussed her own “journey” with Arabic language and her work with a curriculum design for Arabic language. She found that there were not the same resources available for those looking to learn Arabic as there are for languages such as English, French and German.

“New philosophies to teach Arabic” are needed Taha said in describing her K-8 curriculum for learning, she said.

These philosophies included not only focusing on grammar, but literature as well.

A question came up during the lecture concerning the impact for international students when returning to their homes with English as another language.

Taha explained that it is not just the language that these students take with them, but the culture as well. Because of this, these students become “change agents” and Taha commented that their experience may have their “world change beautifully.”

Taha presented her main lecture open to the public in the Miller Room of the Henry Student Center. With this lecture, she addressed women’s empowerment in the Middle East.

James Merryman, professor of anthropology and sociology, along with Interim Provost, Terese Wignot, gave opening remarks to the main lecture.

Taha praised Wilkes by saying, “I think I’m falling in love with Wilkes University; thanks to you.”

She then continued by saying she would not be giving a lecture, but a “talk from the heart, to the heart.”

Keeping that sentiment in mind, Taha began to discuss her “journey” as a woman in the work force. Her passion was to teach Arabic, and according to Taha, the University of Bahrain had seen that.

Taha claimed that being young, as well as being a woman, yet still becoming the acting dean is “really something challenging.” She has always believed that “order comes with age.” A belief based on the culture of her home, which is Lebanon.

The meaning of “empowerment” was a topic of the lecture. After citing numerous definitions of the term, Taha found the word in simple terms is “something external and given to us,” which Taha did not agree with.

Taha’s belief was that the only real way to empower women is to educate them.

She placed emphasis on the notion that a woman cannot just have an education but must also “excel in it.”

Taha said that with every additional year of education a girl at the primary level receives, she will do, 10-20 percent better economically. In this way, these girls are more likely to be financially independent.

Taha claimed that she felt education empowered women based upon her own life experiences.

“It was not that someone bestowed the power … it was something I worked for … and I got,” Taha said.

In Beruit in 1979, Taha was just 10 years old, and there were civil wars among the people — Christians against Muslims, people against people — with no sound logic to it.

In November of that year, a bomb had landed in her home, killing her father. After the incident, she and her brothers were removed from the house, which was then locked.

Taha remembers saying, “You need to open up the house … I need to get my red bookbag … my school bag.” When asked why, she claimed that it was Sunday night and, “I have to go to school tomorrow.”

After the tragic experience, Taha said she needed to have some sense of control.

“When your losses are so huge and beyond your control, you need to hold onto something you can control yourself,” Taha said.

For Taha, that was her education. From that point on, Taha went from a “mediocre” student to graduating as valedictorian and later, receiving her doctorate.

“I think my message to women and men is that once you are excellent … very few people and things can stop you,” Taha said.

The United Nations Lecture Series will return at Wilkes University on Feb. 18 with the speaker to be determined.