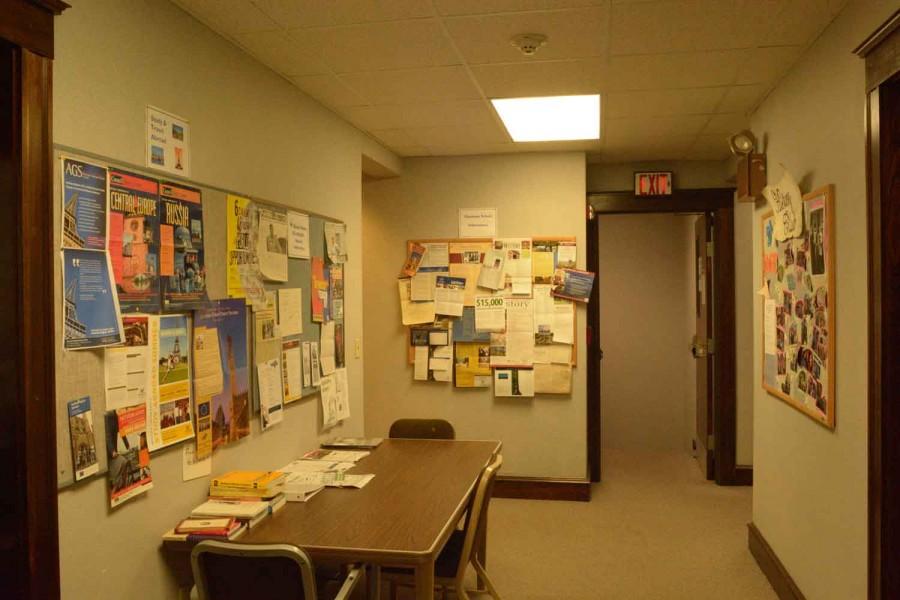 The formation of a new department, a variety of co-curriculars and offices throughout campus has raised questions in regards to usable space for two divisions within the College of Arts, Humanities and Social Sciences.

On June 1, the Division of Global History and Languages was officially formed. However, co-chair John Hepp said although problems with space as a result of the breakup of the department from the Division of Humanities were foreseen, there were several challenges that came with the breakup that weren’t expected.

Hepp said one of the first problems arose with the English department’s decision to go forward with its digital humanities initiative, meaning they needed a room in Kirby Hall that would function in that capacity.

That meant Assistant Professor of Spanish Rafael Garcia was without an office in Kirby Hall. However, after working through a number of options, they ultimately settled on Hepp and fellow co-chair Diane Wenger sharing Wenger’s office on the third floor of Capin for a year and Garcia moving into Hepp’s office.

Hepp said sharing an office with Wenger has worked out well this year because of their teaching schedules have them on campus on different days and at different times. Hepp also added sharing the same office makes it easy for students to find the co-chairs of the department.

The formation of the department has also meant adjunct faculty for Spanish and history have had their offices moved to the second and third floor of Capin. However, a recent hire for history will bring additional questions of space for the department.

“How we’re going to finese the solution, or discuss the situation with everybody, will be most likely that new hire will have to share an office with somebody so that Dr. Wenger and I can go back to go back to having separate offices as it’s a more natural state for both of us,” Hepp said.

Hepp added that due to the lack of space in Capin Hall, there are no plans in place to move Associate Professor of Spanish Paola Bianco from her office on the first floor of Breiseth Hall.

Hepp said for him the issue of space for the department isn’t so much an issue of bringing the department together in one location on campus, it is more a matter of creating a more interactive environment.

“My view is the bigger need for space isn’t so much to get us all together but to have a conference room, to have a place that can serve as a more welcoming invitation to the department than just an old rectangular table on the third floor hallway,” Hepp said.

Hepp added that one of the biggest problems with the current setup of the department is that students don’t know where to go to speak to a faculty member in the department.

“I think the biggest thing that the formation of the department causes is for students some confusion as to where they should go to have forms signed, to track people down,” Hepp said.

Hepp said the ideal situation would be a clear form of identification for the department that directs students to where they need to go.

“The nicest thing would be is if you could walk into Capin Hall and it had a sign outside ‘Division of Global History and Languages office on the second or third floor’ and you walked upstairs and there was a person sitting at a desk that could answer your questions,” Hepp said.

“One of the odd idiosyncrasies of our current system is we still share an office assistant with humanities and her office is in Kirby Hall, so any time she wants to communicate with us we basically have to do it by email or telephone so there’s just some awkwardness to the way the setup is at the moment,” Hepp said. “And it’s also I think it’s unfair for the communication studies office assistant because lots of people looking for us come in and are asking her questions.”

Hepp said although the current situation is far from ideal, he is content with the setup.

“While I don’t love what we have, I do like the fact that every member of our department except for one has their offices in Capin,” Hepp said.

Stine said another problem that has arisen from the co-curricular activities for the department being in different places on campus is that a lot of the space being occupied by the co-curriculars are things that could be consolidated and used as one unit.

Stine said although nothing official has been confirmed, there had been among himself,  former Dean of the College of Arts, Humanities and Social Sciences Linda Winkler, then-Provost Reynold Verret, and Director of the Shelbuorne Television Studio Carl Brigido concerning buildings in the downtown area that could be feasible for the department.

When they presented the ideas to Vice President of Finance and General Counsel Loren Prescott, the ideas simply remained as ideas. However, President Patrick Leahy’s support of

the department coming together in one location mean the possibility of something moving forward to bring the department together.

Although there have been rumors of the department moving into the former Bartikowsky Jewelers building next to the University Center on Main St, Stine said while there is nothing official confirmed on the building, there are negotiations being made to purchase it.

“We do hope that we get to the Bartikowsky building because we think it’s ideally suited in terms of its location for our program,” Stine said. “We also think the size is fairly appropriate for what we need.”

Hepp said if the communication studies department moves from Capin to a more consolidated space, it could create more space for the department of Global History and Languages.

“It would be my expectation that we would get more of Capin Hall and that would allow us to come up with better office solutions for the people we already have and at that point think about whether Dr. Bianco would like to move over and join us,” Hepp said.

Stine added that consolidating the department could open up more space for campus and create opportunities for cross-collaboration across co-curricular activities, which would create an opportunity for convergence among the different mediums.

“The importance of our coming together really allows us to mimic what’s happening in the communications industry and at the end of the day is going to benefit our students and give them an experience that is like what they will find in the industry today,” Stine said.