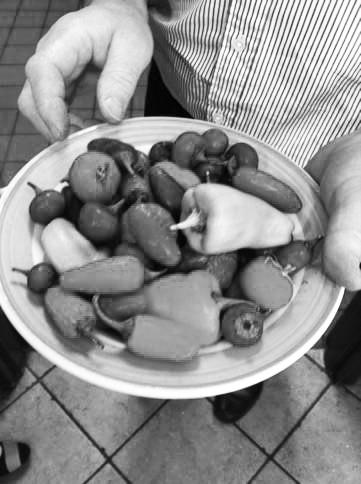 Wilkes University Dining Services has been featuring various vegetables, herbs and flowers in their dishes that have been grown on campus in the newly renovated greenhouse.

Ron Williams, general manager of Wilkes University Dining Services, sought to use the greenhouse next to Farley Library over the summer of 2013 to grow produce that the various dining locations on campus can use for preparing meals.

The harvest for this year consists of several varieties of tomatoes, cucumbers, squash, zucchini, peppers, lettuces and herbs along with a variety of flowers grown. All of the produce will be used throughout the dining facilities on campus as part of various specialty dishes and in the on-campus catering programs offered.

“You’re always looking for local produce and local sourcing of herbs and vegetables,” Williams said of his motivation.

After walking by the greenhouse for years and noticing there wasn’t really anything happening there, we thought it would be a great opportunity for us to try to grow some of our own stuff.”

The produce grown on campus will not be enough to sustain all of the dining needs for the people who eat within the dining locations.

“The dining facilities on the Wilkes campus go through more than 20 cases of lettuce alone in an average week,” Williams said.

While importing produce to the Wilkes dining locations is still a necessity, the produce being grown on campus will be used in specialty sandwiches and salads while the supply which has been grown lasts.

Williams and his staff will continue to grow in the greenhouse next year as long as he has the continued permission of the university and climate is agreeable for productive growing. He says that he anticipates next year’s harvesting to be “a lot less expensive and a lot less work.”