Last year hurricane Irene and tropical storm Lee hit the greater Wilkes-Barre area in full force. The city was asked to evacuate the area and find a safer place to reside. Included in the evacuation was Wilkes University and Kings University.

“We were prepared and had a plan ready for this kind of situation,” said Director of Residence Life Elizabeth Swantek said.

All students were notified at 2 a.m. they would have to evacuate. For students living on campus, their Resident Assistant called a meeting and gave directions for each person to follow. Students were required to give their information as to where they would be going and who would be going with them, meaning students who could not to get to their homes.  They then had to sign out so their RA, so they could include in the count for their residents who couldn’t get home and who could go home. 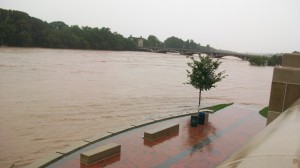 Students who were unable to get home had the option of taking a shuttle to the University of Scranton. This shuttle would take all the students unable to get home up to Scranton where they would be safe. These students were set up with beds, food and entertainment and able to have a little fun and relax even due to the circumstance.

“It was great, we were provided with Wii’s and TV’s for the students,” Assistant Director of Residence Life Danielle Kern said.

FEMA can provide grants of money to homeowners up to a certain amount. They can also provide people with temporary housing in the form of a mobile home or money to put you up in a hotel or rental assistance.

FEMA said Public Assistance provides a minimum of 75 percent of the cost to repair or replace disaster-damaged infrastructure. A federal share of more than $4.5 million helped fund emergency work and debris removal soon after Irene and Lee struck. Other PA projects are now being developed and approved by local, commonwealth and federal officials. Several will take many months. The estimated cost when complete is more than $200 million.

Many applicants were declared ineligible because they already had flood insurance, were found to have no damage or were unable to verify the home as their primary residence. FEMA does not pay out on second homes, said FEMA spokeswoman Josie Pritchard.

This may have all been promised, but some people feel that these promises have not been fulfilled. Wilkes-Barre was supplied with a couple of FEMA trailers and assistance from charity groups like the Red Cross.

“These were historic storms for the state of Pennsylvania. People throughout the state have been heavily impacted and these funds are making a great deal of difference to many lives as we continue to recover from these storms,” said Commonwealth Coordinating Officer, John Forr.